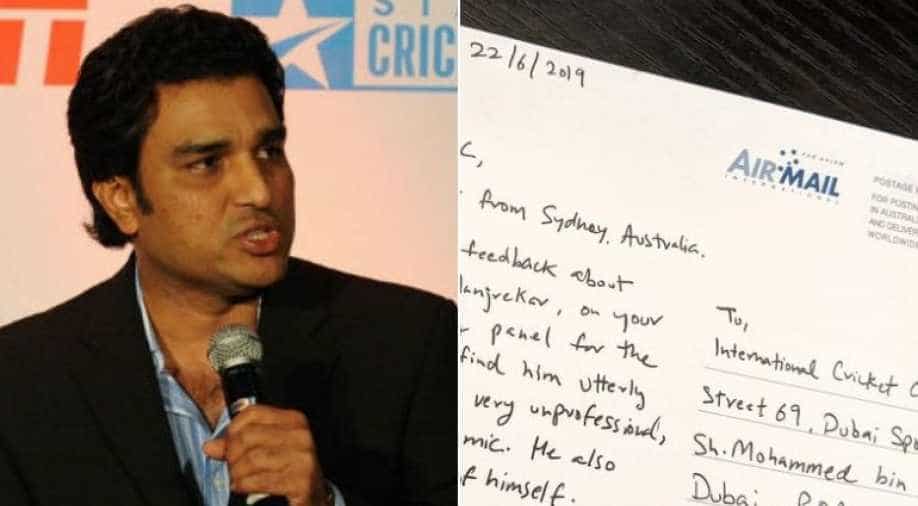 A cricket fan from Sydney, Australia has taken a swing at Majrekar in a letter written to the International Cricket Council (ICC)

A cricket fan has complained about Sanjay Manjrekar's commentary during the twelfth edition of the Cricket World Cup, which is underway in England and Wales.

Former Indian cricketer Sanjay Manjrekar has often been criticised for his on-air comments and Twitter posts and a similar incident happened again in the ongoing edition of World Cup as a fan has called his comments "biased".

Addie Kumar, a cricket fan from Sydney, Australia has taken a swing at Majrekar in a letter written to the International Cricket Council (ICC).

In pics: Major takeaways from India's historic win over Pakistan in World Cup

The letter addressed to ICC's head office in Dubai, United Arab Emirates (UAE), read, "Hey ICC! Greetings from Sydney, Australia. A bit of feedback about Sanjay Manjrekar, on your commentary panel, for CWC: I find him utterly biased and very unprofessional, behind the mic. He also sounds full of himself. Other than that, great World Cup. Thanks."

Addie tweeted the letter with a caption, "I am unhappy with Sanjay Manjerekar’s commentary. I wrote to ICC about it. #CWC19."

In another tweet, Addie wrote, "This is for the comment Manjrekar made a few days ago when he said this about Dhoni: "He is our watchdog behind the stumps". You are a commentator. You have no side. There is no "us". There is no "our". #CWC19."

I am unahappy with Sanjay Manjerekar's commentary. I wrote to ICC about it. #CWC19 pic.twitter.com/KzgqtLHuzU

The cricketer-turned-commentator has played international cricket for India from 1987 until 1996 as a right-handed middle order batsman.