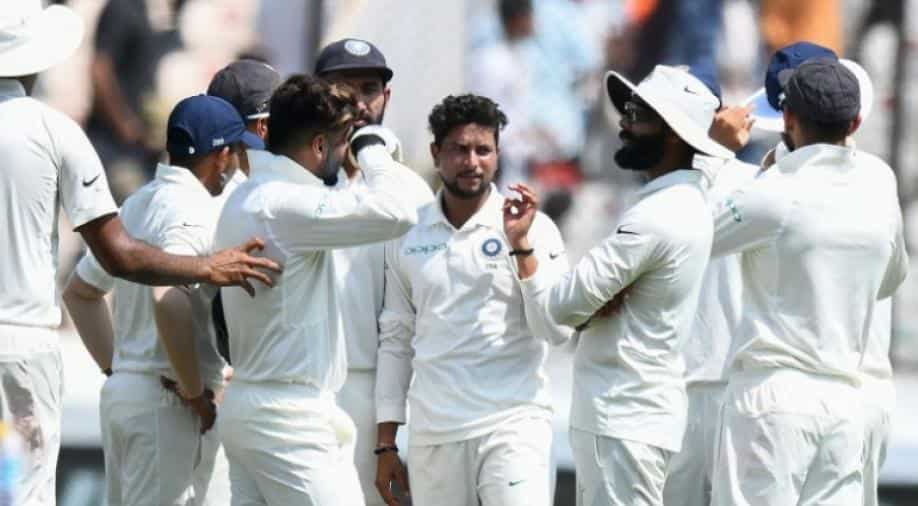 India's mystery spinner Kuldeep Yadav saw off Kraigg Brathwaite in the 23rd over.

West Indies were 86 for the loss of three wickets at lunch on the first day of the second Test against India in Hyderabad on Friday.

Shimron Hetmyer was batting at the break on 10 after Shai Hope fell lbw to paceman Umesh Yadav for 36 at the stroke of lunch.

Earlier, West Indies captain Jason Holder won the toss and elected to bat against India in the second and final Test.

Holder, who missed the team's opening loss due to an ankle injury, comes in for fast bowler Keemo Paul. Paceman Sherman Lewis has been replaced by spinner Jomel Warrican.

It was an even first session in the second Test until Umesh Yadav struck with the last ball before lunch to end Shai Hope's stay.

India will be the happier team at the break, having the Windies at 86/3.

India have made just one change from their record win in Rajkot last week with debutant paceman Shardul Thakur coming in for Mohammed Shami, who has been rested.

Skipper Virat Kohli admitted that he would have also batted first as the world's top Test side eyes a series sweep.

"Not bothered of the toss but I would have batted first as well. We have to focus on this series, just focusing on repeating the things we did in the first game," said Kohli.

"Shami has been rested, he has played six Tests and has bowled a lot of overs."

India are runaway favourites to sweep the series after they hammered the West Indies by an innings and 272 runs in the first Test.