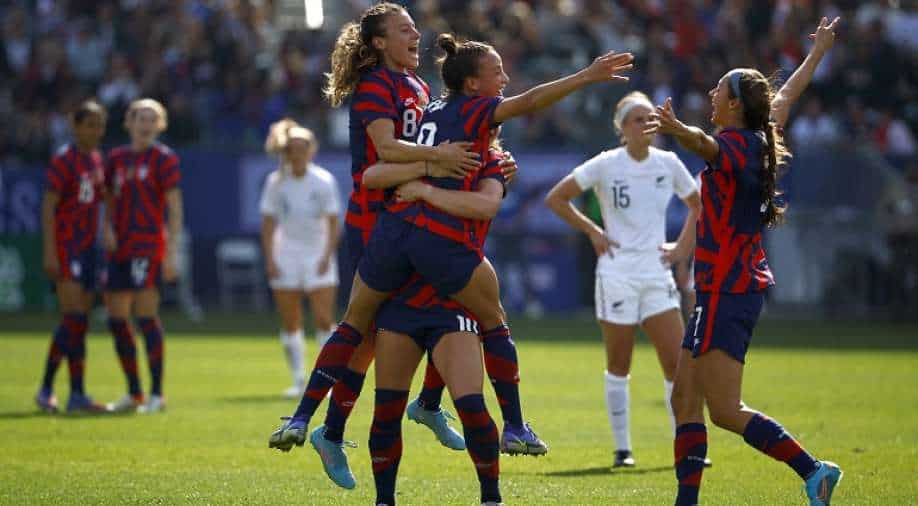 The U.S. women's national soccer team (USWNT) and the governing body U.S. Soccer have agreed to resolve the equal pay claims in litigation that has been pending since 2019, the two parties said on Tuesday.

The U.S. women's national soccer team (USWNT) and the governing body U.S. Soccer have agreed to resolve the equal pay claims in litigation that has been pending since 2019, the two parties said on Tuesday.

"We are pleased to announce that, contingent on the negotiation of a new collective bargaining agreement, we will have resolved our longstanding dispute over equal pay and proudly stand together in a shared commitment to advancing equality in soccer," U.S. Soccer and USWNT said in a joint statement.

The New York Times reported that under the terms of the agreement, players will receive $24 million and a pledge from U.S. Soccer to equalize pay for the men's and women's national teams, in all competitions including the World Cup, in the next collective bargaining agreements.

"Getting to this day has not been easy. The U.S. Women’s National Team players have achieved unprecedented success while working to achieve equal pay for themselves and future athletes," the joint statement added.

"Today, we recognize the legacy of the past USWNT leaders who helped to make this day possible, as well as all of the women and girls who will follow."

The World Cup-winning team sued the governing body in 2019 seeking $66 million in damages under the Equal Pay Act, alleging gender discrimination in compensation and nearly every other aspect of playing conditions.

ALSO READ: Brazilian legend Pele to remain in hospital for longer due to urinary infection

U.S. Soccer argued the women's team had received more compensation than the men's team over the last decade.

In May 2020, a United States District Court judge for the Central District of California threw out the players' claims for equal pay but allowed their claims about playing conditions to go forward.

The players reached a settlement on the conditions part of the lawsuit and had appealed against the wage decision portion.