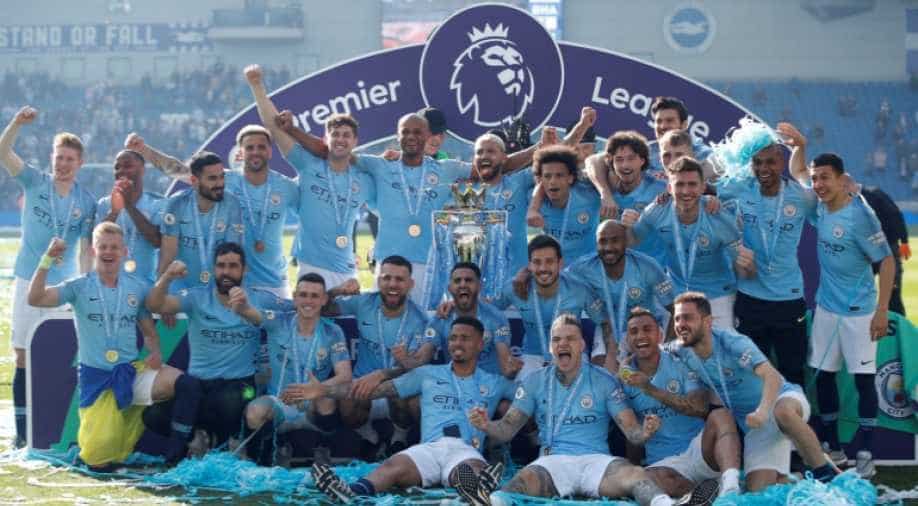 The ruling, if upheld, would mean Pep Guardiola's side would not be able to compete in the 2020-21 Champions League should they again qualify for Europe's top club competition. They would also be banned from European competition in the 2021-22 season.

English champions Manchester City have been banned from European competition for the next two seasons and fined 30 million euros ($32.53 million) by European soccer's governing body UEFA after an investigation into alleged breaches of Financial Fair Play (FFP) rules.

The ruling, if upheld, would mean Pep Guardiola's side would not be able to compete in the 2020-21 Champions League should they again qualify for Europe's top club competition. They would also be banned from European competition in the 2021-22 season.

The top four teams in the Premier League qualify for the Champions League and City are currently second -- should the ban stand then the fifth-placed team would take their spot.

An absence from Europe would have a significant impact on the club's revenue and their prestige. Liverpool earned 111 million euros from UEFA for winning last season's competition.

The Premier League said in March that it had opened its own investigation into City and FFP after UEFA began its probe.

UEFA's FFP rules are designed to prevent clubs receiving unlimited amounts of money through inflated sponsorship deals with organisations related to the owners.

The Adjudicatory Chamber of UEFA's Club Financial Control Body (CFCB) said City had broken the rules by "overstating its sponsorship revenue in its accounts and in the break-even information submitted to UEFA between 2012 and 2016" and added that the club "failed to cooperate in the investigation".

But City, who have denied any wrongdoing, said in a strongly worded response that they will fight the decision.

"Simply put, this is a case initiated by UEFA, prosecuted by UEFA and judged by UEFA. With this prejudicial process now over, the Club will pursue an impartial judgment as quickly as possible and will therefore, in the first instance, commence proceedings with the Court of Arbitration for Sport at the earliest opportunity," the club said.

Describing themselves as "disappointed but not surprised" by the decision, City took aim at the investigation process.

"In December 2018, the UEFA Chief Investigator publicly previewed the outcome and sanction he intended to be delivered to Manchester City, before any investigation had even begun.

"The subsequent flawed and consistently leaked UEFA process he oversaw has meant that there was little doubt in the result that he would deliver. The Club has formally complained to the UEFA Disciplinary body, a complaint which was validated by a CAS ruling."

City face Real Madrid later this month in the last 16 of this season's Champions League as Guardiola tries to secure a trophy that the club have never won.

In March 2019, PSG won a legal battle against UEFA after the governing body tried to reopen its investigation into the French club's spending on transfer fees and wages.

UEFA opened an investigation into Manchester City that month after the publication of 'Football Leaks' documents led to allegations that the club’s Abu Dhabi owners had inflated sponsorship agreements to comply with FFP requirements.

Reuters reported extensively on City and FFP issues arising from the Football Leaks documents in The Soccer Files https://www.reuters.com/investigates/section/soccer-files series.

The Abu Dhabi United Group, the investment vehicle owned by Sheikh Mansour bin Zayed Al Nahyan, is the majority owner of the City Football Group, with a stake of around 77%.