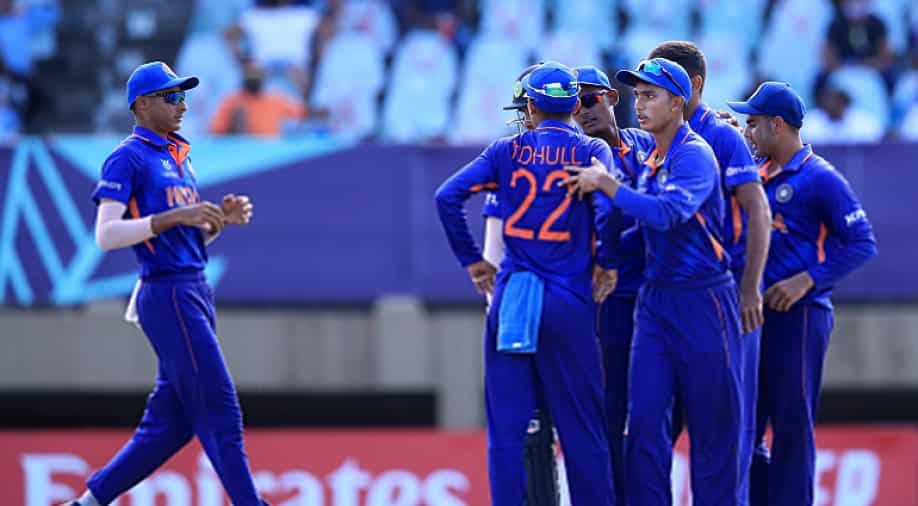 Out of the six players, who were isolated before the match against Ireland on Wednesday, only all-rounder Vasu Vats tested negative, an ICC source told PTI.

Five Indian players, including skipper Yash Dhull, were on Friday ruled out of team's final league game against Uganda in the U-19 World Cup after testing positive for COVID-19 in latest RT-PCR tests.

Out of the six players, who were isolated before the match against Ireland on Wednesday, only all-rounder Vasu Vats tested negative, an ICC source told PTI.

The team, which has already qualified for the quarterfinals, is set to take on Uganda in the final Group B game on Saturday in Tarouba, Trinidad.

"One positive out of this unfortunate situation is that the 11 who played against Ireland have all tested negative," said the ICC source.
Among the infected, Dhull has the worst symptoms but he along with the other players, "should be fine" before their quarterfinal on January 29 provided they top Group B.

India registered a thumping win over Ireland to qualify for the knockouts after barely managing to field a team in the wake of COVID outbreak in their camp.

All the infected players are required to undergo five days of isolation as per tournament protocols and can only rejoin the team after returning three negative tests within that period.

How did the virus enter the bubble?

After winning the Asia Cup in the UAE, the Indian team had flown to the Caribbean via Amsterdam. A support staff member, who is fine now, had tested positive during the hard quarantine upon arrival in Guyana after catching the infection in transit and it is believed the players contracted the virus from him.

Read Also | He also used to be like that: Zaheer Khan compares Indian star's approach with Virender Sehwag

The entire squad underwent a five-day hard quarantine in Guyana upon arrival and took three RTPCR tests within that period. However, with the test report taking as long as 48 hours, the third test report was only made available on the seventh day.

"The players mingled with the coach in that period and that seems be to be most likely source of outbreak in the team," added the source.

It has also been learnt that the tournament's bio-bubble could be stricter with team not being allocated dedicated floors in the hotel as it was the Asia Cup in the UAE.

However, despite a tight bubble in Dubai, the virus managed to enter the environment and a league game between Sri Lanka and Bangladesh had to be abandoned after two officials involved in the game tested positive.