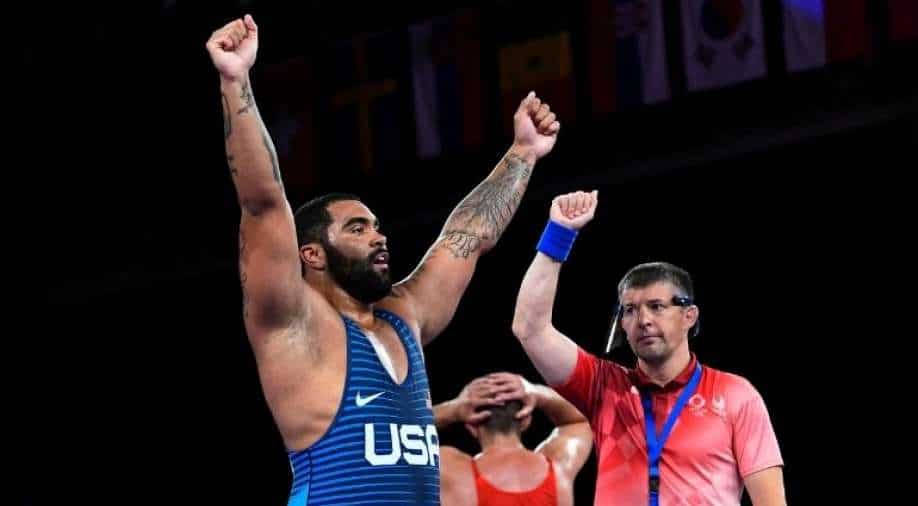 But with 10 seconds left, Steveson turned things around with two spin-behind takedowns, the second coming just as the buzzer sounded to go up 9-8.

Steveson took the lead when he slammed his 125 kg opponent down for a takedown that echoed around the near-empty arena and nearly scored with a four-point throw but the Georgian gamely fought back with two gut wrench moves to lead 8-5.

But with 10 seconds left, Steveson turned things around with two spin-behind takedowns, the second coming just as the buzzer sounded to go up 9-8.

Petriashvili`s corner challenged the decision on the final takedown in desperation and lost another point in the process, giving the American a 10-8 victory.

"You saw that? Oh my god, wow. No way, ain`t no way," Steveson said in disbelief. "I`m speechless, I`ve never done it before but today was the day. Damn!

"In those last few seconds, I knew I could fire it up, I tricked him and he bought it. I looked at the clock at it was 0.3 (seconds) left... It was the match of the century."

A visibly upset Petriashvili punched a sign and shouted in despair as he returned to the dressing room. He did not raise his head once during the medal ceremony.

"I came here for back-to-back gold medals after Rio," Akgul said. "But... an Olympic medal is still important and valuable."

Pang jumped into a 4-0 lead at the break but Mukaida stormed back into the contest to level it at 4-4 before pushing the Chinese out of bounds for the point to seal victory.

Japan`s Kawai sisters - Risako and Yukako - won the lightweight and middleweight golds while Yui Susaki is in Saturday`s flyweight final.

"It`s been a long, hard journey and wasn`t easy (after) my fifth place in Rio," Abdurakhmonov said. "I had many sleepless nights after I lost there and now thank god, a lot of work paid off."