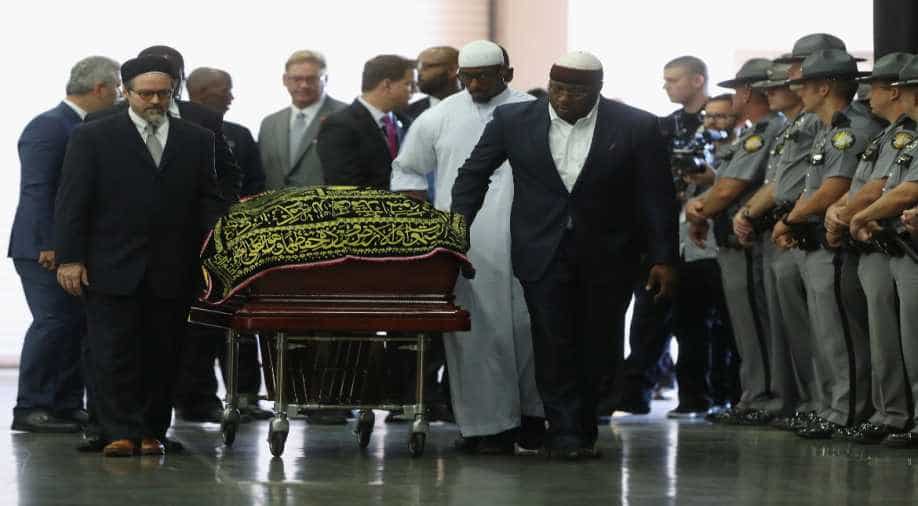 The casket with Ali's body arrives at the Kentucky Exposition Center in Louisville. Photograph:( Getty )

A Muslim funeral for Muhammad Ali on Thursday drew thousands of admirers to the boxer's hometown of Louisville, Kentucky, where mourners prayed over the body of a man who battled in the ring and sought peace outside it.

An estimated 14,000 people, representing many races and creeds, attended the jenazah, or "funeral" in Arabic, where he was repeatedly feted as "the people's champion."

Ali, a three-time heavyweight champion known for his showmanship, political activism and devotion to humanitarian causes, died on Friday of septic shock in an Arizona hospital. He was 74.

"The passing of Muhammad Ali has made us all feel a little more alone in the world," said Sherman Jackson, a Muslim scholar at the University of Southern California.

"Something solid, something big, beautiful and life-affirming has left this world," he said of a man who was forced to give up more than three years of boxing at the height of his career for his refusal to serve in the U.S. military during the Vietnam War.

Jackson praised Ali for advancing the cause of black Americans during and after the civil rights movement of the 1960s. Others admired him for making Islam more acceptable and giving US Muslims a hero they could share with the American mainstream. Imam Zaid Shakir, a founder of Muslim liberal arts school Zaytuna College in Berkeley, California, led worshippers in prayers over Ali's body, which lay in a casket covered with a black and gold cloth.

Ali and his family planned his funeral for 10 years, making sure it would honour his Muslim faith while also adapting to the demands of Western media-driven culture.

U.S. President Barack Obama also praised Ali on Thursday in a Facebook live broadcast from the White House, showing off a copy of the book, "GOAT: A Tribute to Muhammad Ali," and a signed pair of boxing gloves gifted to him by Ali.

"It's very rare where a figure captures the imagination of the entire world," Obama said. "He was one of a kind and in my book he'll always be the greatest."

The two-day funeral will continue on Friday, after a procession and before one final goodbye when thousands more will gather for an inter-faith service.

"Ali will never die. His spirit will live on," boxing promoter Don King told Reuters from Thursday's venue at Freedom Hall, the complex where Ali defeated Willi Besmanoff in 1961 in his last fight in Louisville.

Ali rose to the top of the boxing world when black fighters were expected to be quiet and deferential. His braggadocio, even before he changed his name from Cassius Clay, startled white America. He further shocked Americans after he joined the Nation of Islam and adopted an Islamic name in 1964.

In the 1970s, Ali converted to Sunni Islam, the largest Muslim denomination worldwide. Late in life he embraced Sufism, a mystical school of the faith.

Ali's boast of being "the greatest of all time" and his ability to "float like a butterfly and sting like a bee" stoked controversy at home, while his criticism of the U.S. war in Vietnam earned him admiration in much of the developing world.

With time, even his American critics grew scarce, and he achieved near mythical status as he lit the flame to open the 1996 Olympics in Atlanta, by then muted and trembling from the Parkinson's disease that afflicted him over the final three decades of his life.