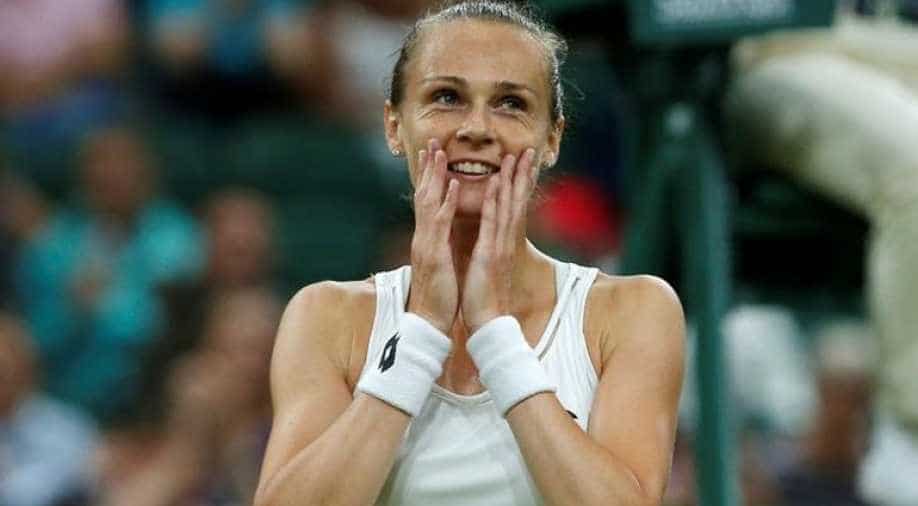 Slovakia?s Magdalena Rybarikova celebrates one of her victories. Photograph:( Reuters )

Rybarikova made an impressive start, firing two aces on her way to winning the first set over her French opponent.

The 29-year-old ranked 22 in the world, struggled with injury during the majority of the second set, and after ceding a 4-1 lead, took a medical timeout.

Mladenovic, unaffected by the break, raced to a second set win, in which she hit 13 winners and only five unforced errors.

The players exchanged early breaks in the final set but Rybarikova clinched the decisive lead in the tiebreak, before sealing the victory on her seventh match point.

"I am happy that I went through this match because conditions were tough and I had some problems with my leg," Rybarikova said after the match.

"I was saying to myself that I had to win this match because I had so many match points and it would be really cruel to end the season like this."

Rybarikova improved her record in the Azalea Group to 1-1 after dropping her first match to Julia Goerges on Tuesday.

Mladenovic will now have to beat Goerges in their match later in the week to have any chances to reach the final four.

Australia`s Ashleigh Barty moved to the top of the Rose Group with a convincing 6-4 6-1 win over Anastasia Pavlyuchenkova.

Barty broke the Russian`s serve four times and served nine aces in the victory and will qualify for the semi-finals outright, should she beat Angelique Kerber on Thursday.

"To qualify for this week is just a massive bonus," Barty, the youngest player in the draw at 21, told reporters.

"And now to get a win, I can just look forward to the match tomorrow and try and go out there and play with freedom again."