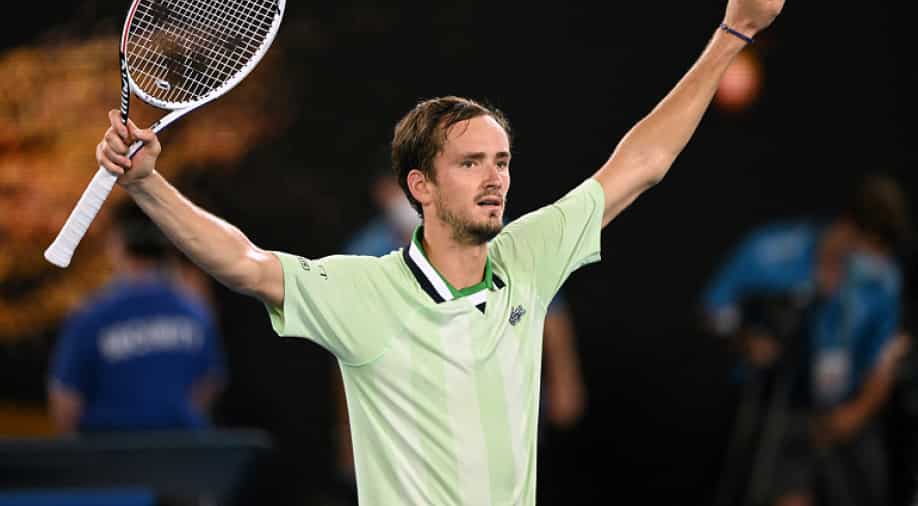 Have faith in my capabilities; there is no pressure ahead of final clash with Nadal: Medvedev Photograph:( AFP )

"Playing on this unbelievable court, probably the best in the world, with an amazing crowd is really special," Hurkacz said in his on-court interview.

World No.2 Medvedev was leading Hurkacz by two sets to one on Monday with the fourth set on serve when play was cancelled for the day because of rain after the players had spent two hours and 25 minutes on Court Two.

"Playing on this unbelievable court, probably the best in the world, with an amazing crowd is really special," Hurkacz said in his on-court interview.

"Daniil is an unbelievable player. We battled so hard on Number Two Court. So to win is incredible... I knew I needed to get off to a strong start today and I think I did a pretty good job."

Hurkacz could not have hoped for a better start as he broke Medvedev immediately after the resumption with the Russian double-faulting on break point. The Pole then held serve to level the match at two sets each.

Medvedev took a comfort break at the end of the fourth set having just played two games but things did not change when he returned to court.

The Pole broke the Russian`s serve to love at the start of the deciding set to continue his ascendancy before a second break sealed the fate of the contest with Medvedev finding the net with a low forehand volley on match point.

Next up for the world number 18 will be the 39-year-old Federer, the 20-time major winner, who defeated him in their only previous meeting in 2019 at Indian Wells.

"Roger, what he does, the titles he has won, is a real inspiration," Hurkacz said about the Swiss great. "I will be hoping to get a little bit of support tomorrow."