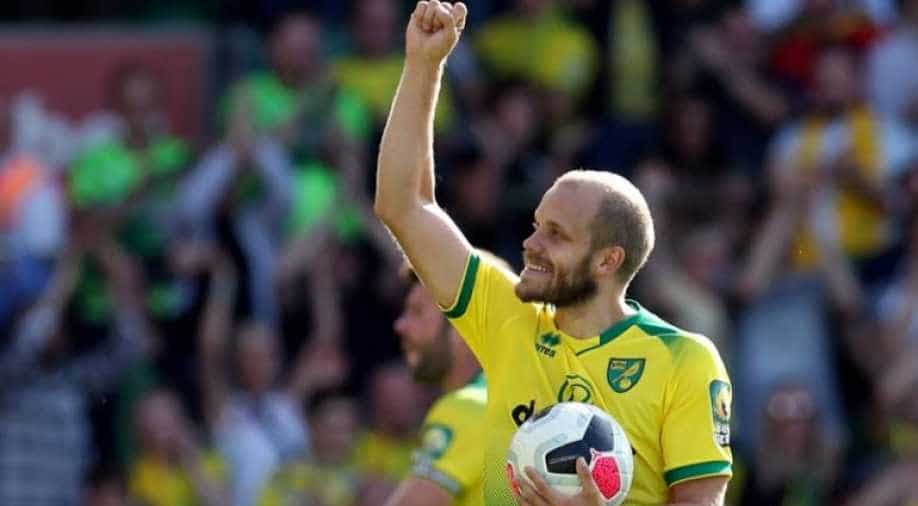 Norwich City's Finland striker Teemu Pukki grabbed a hat-trick, including a thunderous volley, as they beat Newcastle United 3-1 in their first home game back in the Premier League after a three-year absence at a sunny Carrow Road on Saturday.

Last season's Championship top scorer and Player of the Season showed his class as the Canaries handed Newcastle's new manager Steve Bruce his second league defeat of the season on an unhappy return to a club he captained in the mid-1980s.

"Three points was what we wanted today. The first hat-trick in England so I'm really happy. Good, good victory especially after the display last week," said 29-year-old Pukki, who also got on the scoresheet in Norwich's opening 4-1 loss at Anfield.

"There are better players than in the Championship, but we are playing better football and the guys are creating chances - I could have scored more.

"My daughter will probably play with the match-ball. It will have a special place."

Norwich, who had dominated the opening exchanges, took the lead just past the half hour when Pukki gave goalkeeper Martin Dubravka no chance with a stunning strike from 15 metres after a cross from Emiliano Buendia was headed out by the defence.

The Finn got his second after 63 minutes when Todd Cantwell rolled the ball to him and Pukki cut inside before striking a low shot into the bottom corner from just inside the area.

The striker wrapped up the points with his third goal in the 75th, after being set up by Cantwell again, before Jonjo Shelvey's late consolation for the visitors as Daniel Farke's Norwich put their opening league defeat behind them.

Pukki is the first Norwich player to score a Premier League hat-trick since Efan Ekoku against Everton in 1993.

"It was a brilliant performance by Teemu today not just because of his goals but his workload," said the Norwich boss. "I was especially pleased with the defence. Grant Hanley had an unlucky time at Liverpool but a great performance today."

Norwich captain Hanley put Liverpool ahead last week with an early own goal but he marshalled the defence superbly against his old team, who rarely threatened and wasted the few chances they created including a glaring headed miss by Joelinton.

"It was hugely disappointing in the manner of it (the defeat)," said Bruce. "We certainly didn't do enough with or without the ball and we'll have to put that right for sure."