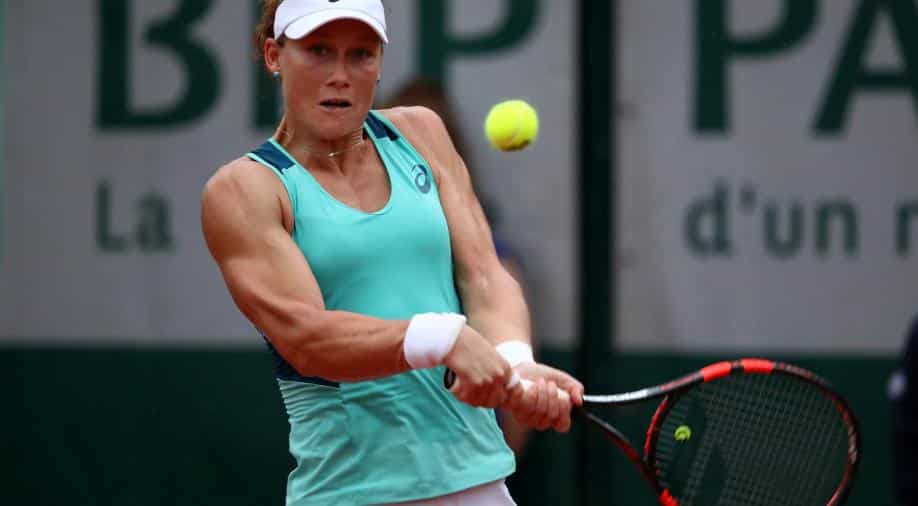 Sam Stosur powered into the French Open quarter-finals on Tuesday with a straight sets win against Simona Halep, adapting better to damp and heavy conditions that her higher-ranked Romanian opponent called unsafe.

In a match between two former Roland Garros finalists that spanned three days, which was often punctuated by drizzle and twice suspended due to rain, the 21st-seeded Australian overcame a slow start to beat Halep 7-6(0) 6-3.

Organisers lost a whole day's play on Monday, the tournament's first washout since 2000.

Stosur's win was her first against Halep in their last five encounters and marked a sharp turnaround from their previous clash in April, also on clay, in the Madrid Open semi-final, which the Romanian won 6-2 6-0.

"Madrid was not a good night for me, and ...obviously you get this opportunity to play her again in a big match," Stosur told a news conference.

"Heavy, wet conditions like this don't typically help me too much, but I think today I was able to use them better (than Halep)."

"It was impossible to play, in my opinion," she told reporters while praising her opponent. "I don't care that I lost the match today, but I was close to injuring my back... I didn't feel safe on court."

The first rain stoppage in the match was late on Sunday with Halep leading 5-3, the Romanian's steady pummelling of Stosur's weaker backhand side having paid off in the seventh game when she took the Australian's serve on her third break point.

But Stosur, who lost the 2010 final in Paris to Italy's Francesca Schiavone, was much the sharper when the players resumed on Tuesday.

She consistently served around 20 km/h (12 mph) faster than her opponent and peppered the lines on both sides of the court with forehand groundstrokes that gradually wore down Halep's defences.

Stosur broke back in the 10th game before, after two service holds, blitzing the tiebreak 7-0.

Stosur then broke again at the start of the second set and led 3-2 until play was suspended again when steady drizzle turned heavier, dropping just one further game to close out the match as Halep continued to struggle in the rain-sodden conditions.