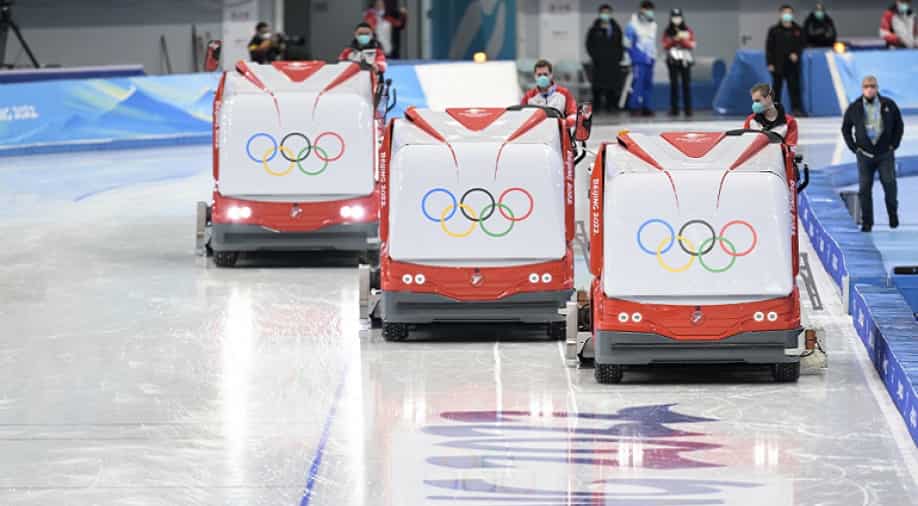 Groomers resurface the ice during a training session at the National Speed Skating Oval in Beijing. Photograph:( AFP )

Ice master Remy Boehler sleeps for just four hours a night during the ongoing Winter Olympics in Beijing to prepare the best skating conditions for athletes at the Capital Indoor Stadium.

Remy Boehler sleeps just four hours a night during the Beijing Olympics to make sure athletes can skate at the Capital Indoor Stadium.

The venue that hosted the `Ping Pong Diplomacy` matches in 1971 has been renovated to welcome the figure skating and short track speed skating events at the Winter Games.

It is ice master Boehler`s task to keep the rink in top shape for two competitions that require different surfaces.

"I leave the place around 3 a.m. with the last team and I come in around 6:30-7 a.m. for the first practice session," the 45-year-old Frenchman, who arrived in Beijing a month ago, told Reuters.

"For the figure skating, the ice needs to be softer than for the short track, where speed is essential.

"So for figure skating events the ice must be at -3.5 degrees Celsius and it needs to be at -7 for short track. It is a big difference, and you cannot do it too quickly otherwise the ice cracks."

Boehler said water is the key to getting it right.

"For each resurfacing, we have a team of patchers to fix the holes and we use about 800 litres of water to remodel the ice. Then we use the resurfacing machines)," said Boehler, who heads a team of 20 including 12 Chinese pilots and four interpreters.

"And the quality of the water is essential. The Chinese have done a great work in improving it in the last months."

For Boehler and his team, time is of the essence.

Some days the rink is used by both for figure skating and short track, leaving only three hours to redesign the ice, with an hour of that needed to change the padding around the rink.

Boehler, who was also the ice master at the Pyeongchang Olympics four years ago, worked on the Capital Indoor Stadium`s ice at the test events last October.

"Contrary to Pyeongchang, where everything was new, this place has a soul," the former ice hockey player, who started to learn the job as a student at the 1992 Albertville Games, said.

The ice master`s job has been made easier by technology in recent years, with temperature probes providing greater precision, but Boehler said the `ear factor` remains key.

"After you`ve worked on the ice, you listen to the skating and get a feeling of the ice`s texture, if it`s too hard or too soft," he added. "And the biggest satisfaction comes from the athletes saying they`re happy with the ice.

"If you get it wrong, it`s not like fixing the light, which you can just switch or off."

The quality of the ice has been praised repeatedly by the skaters in Beijing.

After his role in China comes to an end Boehler will head back to France, where he will be taking care of the ice at the figure skating world championships in Montpellier in March.