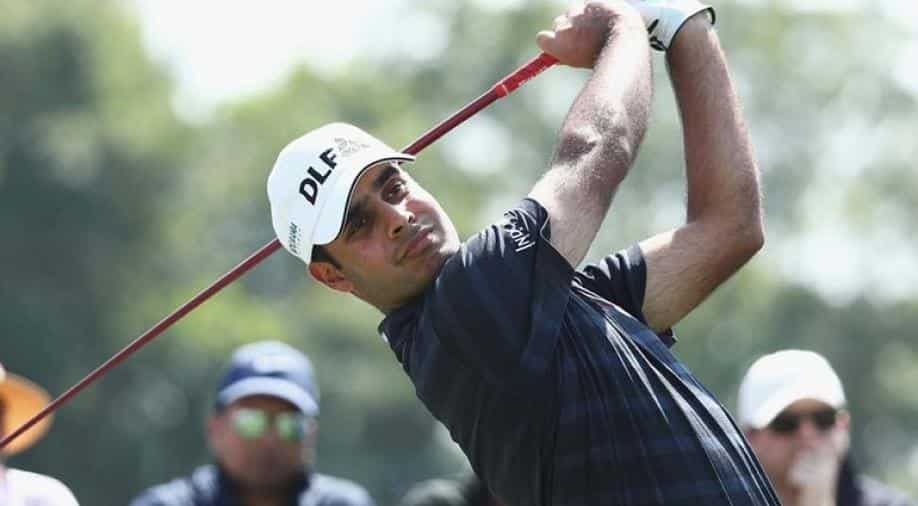 Sharma, who rose to as high as tied-fifth at one stage, dropped a double bogey on Par-5 14th, but recovered with birdies on 15th and 18th as he was seven shots behind England's Matt Wallace (65).

A limping Shubhankar Sharma shrugged off a heel injury to card an impressive five-under 67 to remain tied 20th at the end of the second day in the DP World Tour Championships here Friday.

Sharma, who rose to as high as tied-fifth at one stage, dropped a double bogey on Par-5 14th, but recovered with birdies on 15th and 18th as he was seven shots behind England's Matt Wallace (65).

Meanwhile, Wallace, with whom Shubhankar, played in the lead group of the Hero Indian Open, which the Englishman won, was in the pole position at 11-under after a sizzling seven-under.

"Hopefully, I am done with three-putts for the week," said Sharma, who also admitted that his injured heel did not bother him while hitting shots.

He said, "I had it well-cushioned and it did not bother me while hitting shots. There was some discomfort while walking in the morning when it was raw. It should get better over the next two days and I am looking forward to that."

Sharma added: "Today I hit very well and created chances and holed some putts, too. It was good to get that round in. Last few weeks I have often given it away after making a good start. Today also I had a fine start - birdie-birdie and then turned in three-under. The double on 14th was a bit disappointing."

"If you had asked me at the start of the day I would have taken 67, but now maybe I feel it could have been a shot or two better. But there is two more days to go," the youngster said.

Wallace was one shot ahead of the second placed trio of a resurgent 2016 Masters champion Danny Willett (67), Dubai-based Spaniard Adrian Otaegui (68) and Englishman Jordan Smith (68), all of whom were 10-under. At sole fifth with nine-under was Parick Reed (66).

Kiradech Aphibarnrat, runner-up here last year, exploded on the back nine with five birdies, three of which came in the last four holes, for a round of 66 that took his total to eight-under 136 and three shy of the leader. He was Tied-sixth alongside big stars like Rory McIlroy (67) and Tommy Fleetwood (67) and Reed at nine-under.