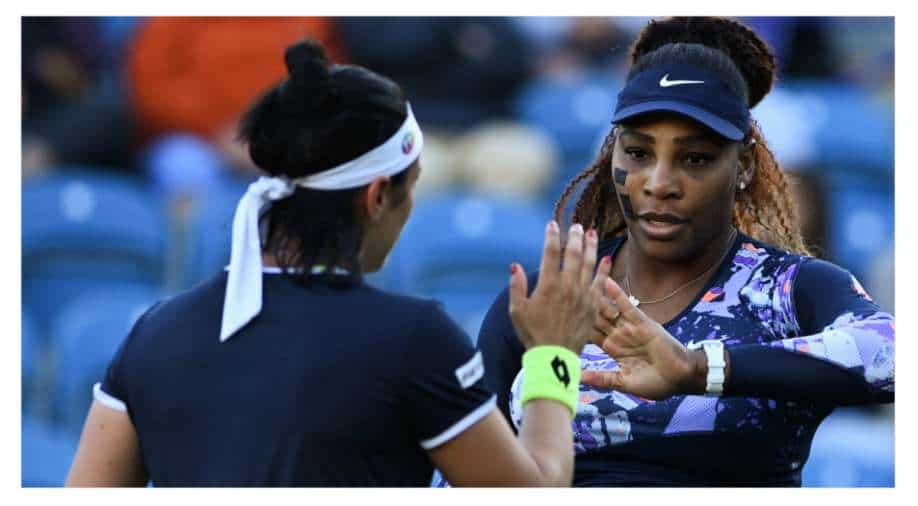 Serena Williams was playing her first tournament since retiring in the first round of Wimbledon last year. The 23-time Grand Slam champion has received a wild card into this year`s Championships and will make her singles return there.

Wild cards Ons Jabeur and Serena Williams have pulled out of their Eastbourne International doubles semifinal against Aleksandra Krunic and Magda Linette due to Jabeur`s right knee injury. Krunic and Linette will contest their first WTA double final as a team. It will be Krunic`s 10th doubles final overall, and Linette`s fifth. Krunic already owns five WTA doubles titles, while Linette won her first in Charleston this year alongside Andreja Klepac. Jabeur and Williams had thrilled the crowd with two victories in their first event together, saving a match point in the first round against Marie Bouzkova and Sara Sorribes Tormo before dispatching Shuko Aoyama and Chan Hao-Ching in straight sets.

Jabeur had captured her third WTA Tour title in Berlin the previous week and will go into Wimbledon as the No.3 seed next week. Williams was playing her first tournament since retiring in the first round of Wimbledon last year. The 23-time Grand Slam champion has received a wild card into this year`s Championships and will make her singles return there. On her return, the 23-time Grand Slam singles champion and 14-time Grand Slam doubles champion Williams kept her return to the WTA Tour rolling, as she and Ons Jabeur earned a 6-2, 6-4 quarterfinal win over Shuko Aoyama and Chan Hao-ching.

After a close first-round win against Marie Bouzkova and Sara Sorribes Tormo, Williams and Jabeur had an easier time in the quarterfinals, knocking out Doubles World No.10 Aoyama and No.49 Chan in just 65 minutes. In singles, defending champion and No.8 seed Jelena Ostapenko reached the quarterfinals after No.11 seed Madison Keys retired from their match due to an abdominal injury. Ostapenko had taken the first set 6-3 when Keys stopped the encounter due to her ailment.

Serena will now be eyeing the 135th staging of The Championships at Wimbledon, which is held at the All England Lawn Tennis Club. Main-draw singles play begins on Monday, June 27.