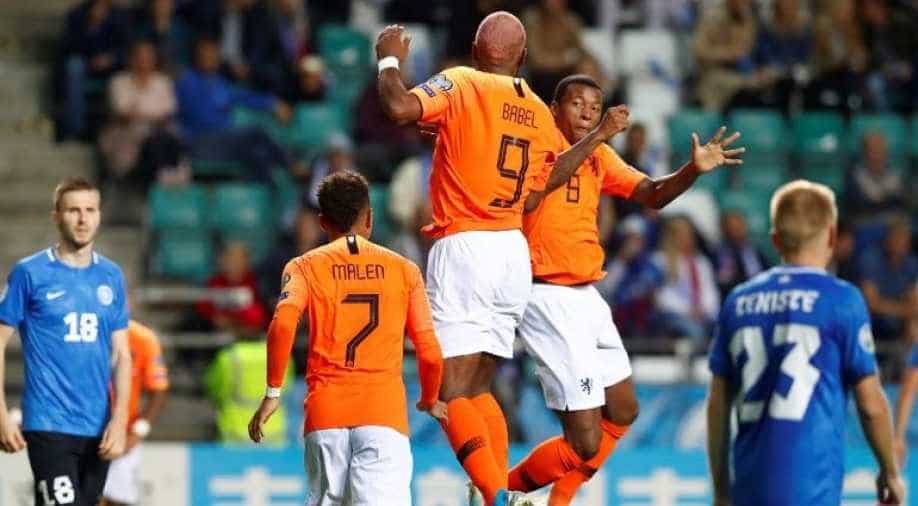 Estonia slipped to a fifth successive loss in the qualifiers

Ryan Babel scored twice as a rampant Netherlands claimed a comfortable 4-0 victory over Estonia in their Euro 2020 Group C qualifier on Monday.

Memphis Depay added an excellent third to mark his 50th cap and Georginio Wijnaldum netted the fourth late on as the Dutch recorded back-to-back wins under manager Ronald Koeman for the first time following Friday’s 4-2 victory in Germany.

The Netherlands remain three points behind the top two in the pool, Germany and Northern Ireland, who have 12 points each. The Dutch have a game in hand.

Estonia slipped to a fifth successive loss in the qualifiers.

The home side started brightly though and created a few half-chances before the visitors took the lead in the 17th minute.

Daley Blind’s low cross from the left was prodded home by Babel, who had ghosted in between the Estonia central defenders and was left with the relatively simple task of placing the ball past goalkeeper Sergei Lepmets.

Wijnaldum saw his shot from the edge of the box saved by Lepmets and the Dutch, for all their domination of possession, failed to add to their tally before halftime.

They scored a second three minutes after the break as Babel rose to head home a Depay’s cross from the right in what was another easy finish.

Netherlands skipper Virgil Van Dijk headed just wide from a free kick, but the visitors got their reward for some adventurous attacking play when Depay controlled the ball on the edge of the box and place a left-footed shot into the corner.

Wijnaldum’s fourth was a gift from Lepmets when his header went under the goalkeeper in what should have been a routine save.