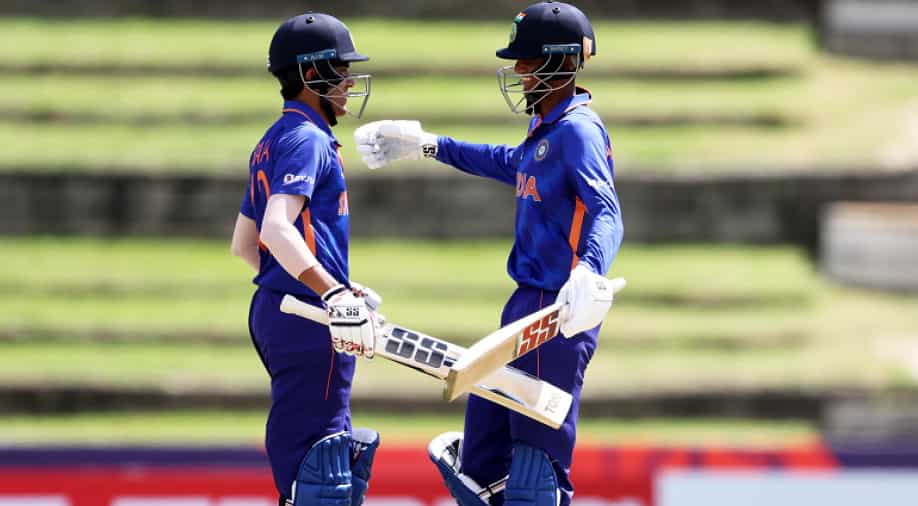 Raj Bawa slammed a record-breaking unbeaten 162 as India mauled Uganda in the U-19 World Cup 2022 on Saturday to reach the top four.

Angkrish Raghuvanshi and Raj Bawa smashed centuries as four-time champions India recorded a thumping 326-run win over minnows Uganda to top Group B in the U19 World Cup here. The victory on Saturday was India's largest win in tournament history.

The Hrishikesh Kanitkar-coached side thus ended the league stage with three wins in as many games, having earlier thrashed South Africa U19 (by 45 runs) and Ireland U19 (by 174 runs).

Put into bat at the picturesque Brian Lara stadium, India colts first rode on hundreds from Bawa (162 not out off 108 balls) and opener Raghuvanshi (144 off 120 balls) to post a mammoth 405/5, the highest total in this edition.

They then bundled out the opposition for a meagre 79 in 19.4 overs to eke out an easy win in a lop-sided affair.
India play their quarterfinals against Bangladesh on January 29, allowing their COVID-19 infected players including skipper Yash Dhull enough time to recover.

Raghuvanshi and Bawa shared 206 runs for the third wicket to take the game away from Uganda.  It was raining boundaries and sixes as Raghuvanshi hit 22 fours and four sixes, while Bawa, who came in at number four, decorated his innings with 14 fours and as many as eight hits over the fence.

After Raghuvanshi's departure in the 38th over, Bawa continued with his attacking instinct and clobbered the Uganda bowlers to all parts of the ground. It was one-way traffic as the Uganda bowlers had no answers to the Indian onslaught and for the East African side.

Skipper Pascal Murungi picked up three wickets for 72 runs, even as all others were brutally taken to task.
Courtesy of the hitting, India recorded their second-highest score in the history of the U-19 World Cup. For the record, India's highest score in the competition remains the 425 for three set against Scotland in 2004, while Australia hold the world record score of 480 for six against Kenya in 2002.

Bawa's unbeaten 162 is now the highest individual score by an Indian in the U19 World Cup as he surpassed flamboyant opener Shikhar Dhawan's unbeaten 155 against Scotland in 2004.

Chasing an insurmountable 406, Uganda were teetering at 17/3 as one-down wicket-keeper Cyrus Kakuru (0), Brian Asaba (5) and Ronald Lutayaa (5) fell cheaply inside the first four overs after opener Issac Ategeka (0) was retired out.

Stand-in-skipper Sindhu (4/19), himself a left-arm spinner, then castled Ronald Opio (11), to take his first, as Uganda lost their fourth wicket for 46.

Rival skipper Murungi (34 off 45 balls; 7x4) only delayed the inevitable as the writing on the wall was clear for Uganda, who always had an uphill task.