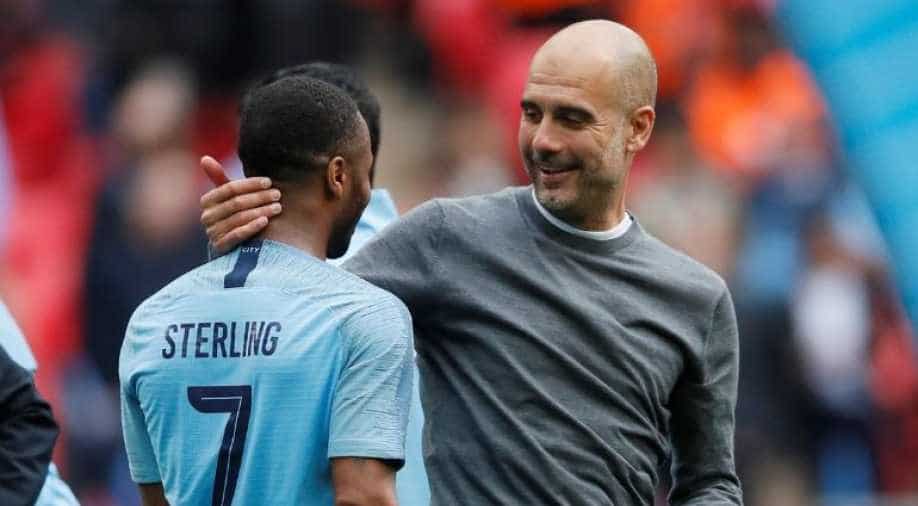 Pep Guardiola would love Raheem Sterling to reach the same level as Lionel Messi and Cristiano Ronaldo, but the Manchester City manager is not sure if any player will be able to equal the feats of that legendary pair.

Others have recently been comparing Sterling to the two dominant players of the last decade.

England manager Gareth Southgate suggested Sterling could eventually be mentioned in the same breath as Messi and Ronaldo when asked how far the City winger could go if he maintains his superb form.

Former Liverpool defender Jamie Carragher has also said that he sees Sterling as a potential future winner of the Ballon d'Or -- an award Barcelona star Messi and Juventus forward Ronaldo have each won five times.

City manager Guardiola is thrilled at Sterling's progress during their three years working together, but having also coached Messi at Barca, he knows the exceptional standards required at that exalted level.

"Right now, Raheem is not in that level, but maybe in the future I wish. It would be a dream for him and for all of us," Guardiola told reporters.

"The consistency of these two guys, they are legends, something unique in world football.

"If Raheem can target that level –- wow. We will be there to help him and of course he can do it.

"But right now, nobody, not in the club, or in all the clubs in the world can compare with these two guys and what they have done every single week for ten years. Nobody."

He has started the new season in electric form with eight goals in seven games for club and country. He scored in both Euro 2020 qualifiers for England during the international break.

To understand what Sterling is up against, Ronaldo's mark of 29 club goals last season for Juventus is the lowest figure either he or Messi have recorded in the last decade.

As City prepare to resume their Premier League campaign, away to Norwich on Saturday, Guardiola has noticed how the 24-year-old is becoming much more clinical in front of goal -- as Sterling aims to improve on his best league tally of 18 from 2017-18.

"Before Raheem made good actions and dribbles, but he didn't finish too much. Now he is a player who can win games for himself," Guardiola said.

"In the beginning, he didn't get there. Now he is always there. I have the sense that he has the desire and commitment to score goals and that's why he scores more goals and has more assists."