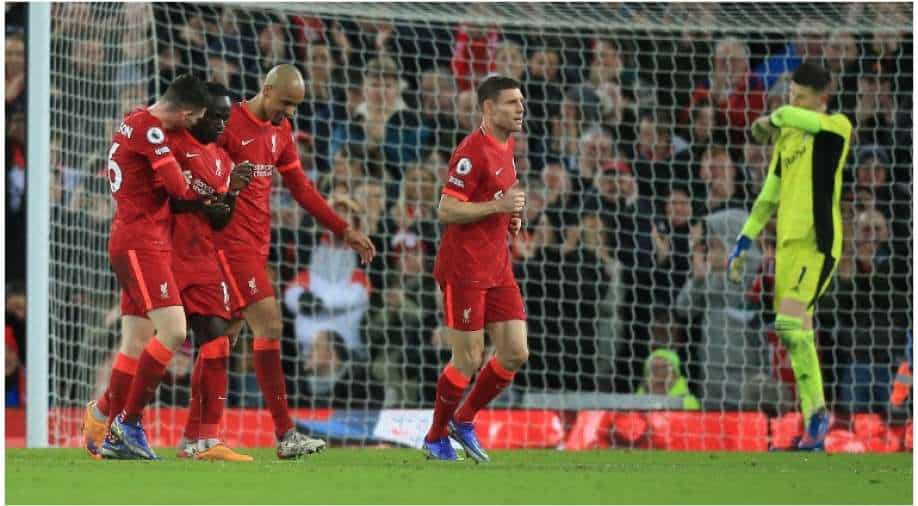 City are at the top of the table with 63 points from 26 matches with Liverpool now moving to 60 off 26. Chelsea are placed third with 50 points but have a match to play.

The 2019-20 winners Liverpool narrowed the gap with Premier League leaders Manchester City to just three points after a thumping 6-0 win at home to Leeds United. Two penalties from Mohamed Salah and a close-range finish from Joel Matip put Liverpool 3-0 up at the break against a rival that, as usual, looked lively in attack and vulnerable in defense.

Sadio Mane netted a fourth for Liverpool in the 80th minute after Salah and Jordan Henderson combined to give the Senegalese forward an open goal on Wednesday night. There was still time for two more goals, as Mane netted his second and Liverpool`s fifth in the 90th minute from close range. Virgil van Dijk then added a sixth with a powerful header from a corner as his side sounded out a warning to Pep Guardiola`s Manchester City, reports Xinhua.

City are at the top of the table with 63 points from 26 matches with Liverpool now moving to 60 off 26. Chelsea are placed third with 50 points but have a match to play.

Meanwhile, in other matches on the night, Watford coach Roy Hodgson had an unhappy reunion with his former club as Crystal Palace won 4-1 at Vicarage Road to deepen Watford`s relegation worries.

Although Moussa Sissoko quickly canceled out Jean-Phillipe Matete`s 15th-minute opener for the visitors, Conor Gallagher continued his excellent form with a 42nd-minute effort to restore Palace`s lead and two late goals from Wilfried Zaha gave the final score a sheen that flattered the visitors.

Burnley gave their survival hopes a huge boost at the expense of Tottenham`s European ambitions, thanks to Ben Mee`s powerful header which gave them a 1-0 win at home to Antonio Conte`s side.

The win is only Burnley`s third of the season but their second in two games and leaves them just two points behind Newcastle United and Everton and three behind Leeds, who have played two more games.