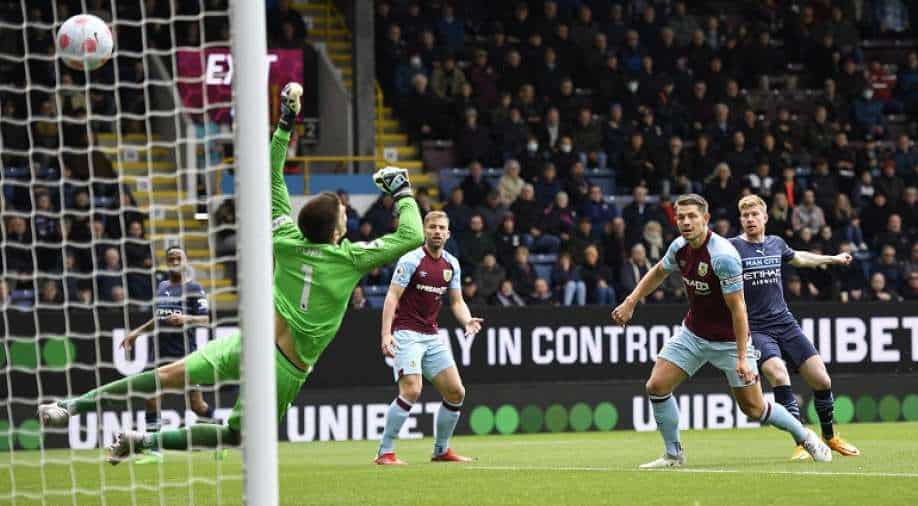 Manchester City moved a point clear of title rivals Liverpool at the top of the Premier League standings with a convincing 2-0 win at relegation-threatened Burnley on Saturday.

Manchester City moved a point clear of title rivals Liverpool at the top of the Premier League standings with a convincing 2-0 win at relegation-threatened Burnley on Saturday.

Needing a win to reclaim top spot after Liverpool beat Watford earlier in the day, first half goals from Kevin de Bruyne and Ilkay Gundogan with two assists from Raheem Sterling sealed all three points for Pep Guardiola's side.

City dominated possession throughout and they made a perfect start by taking a fifth-minute lead after De Bruyne pounced on Sterling's cushioned pass inside the box and pulled the trigger to find the top corner.

Sterling and De Bruyne were instrumental in doubling City's lead 20 minutes later when a quick one-two pass allowed the English forward to sprint down the right flank and cross into the box for Gundogan to score.

"We've played in these types of games for many years. We scored early on so that helped us a lot. But the game is never finished until you score the third or fourth," Guardiola said in a post-match interview with the Premier League.

"The pitch was so difficult because the grass was high, no water and everything was so slow. But we did well and won the game."

City had a wake-up call in the second half when Burnley nearly got one back as Maxwel Cornet's header was cleared off the line by Nathan Ake. Although Cornet was later flagged offside, the move spurred Burnley to press for a goal.

But City improved soon after and they could have scored more with Phil Foden wasting a couple of opportunities while substitute Gabriel Jesus, who has not scored a league goal since September, also failed to find the target.

Meanwhile, Burnley's fourth consecutive defeat leaves Sean Dyche's side 19th, but with games in hand over the relegation battlers.

"It's never a shock against Man City. Sometimes they can score at will if they're feeling it," Dyche told BBC.

"Our nemesis all season has been creating chances and not scoring goals... The second half showed signs of what we`re about, we've got to do that in the games coming up.

"We still have 10 games left and we're still in a fight... We have 10 efforts to get ourselves correct and move forward."