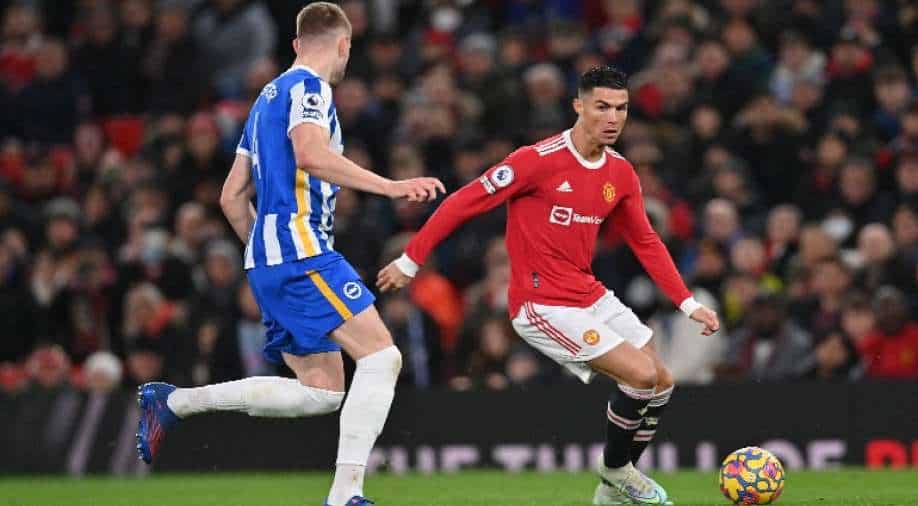 Cristiano Ronaldo broke his goal drought to score Manchester United's opener in a 2-0 defeat of Brighton & Hove Albion that lifted them into the Premier League's top four on Tuesday.

Cristiano Ronaldo broke his goal drought to score Manchester United's opener in a 2-0 defeat of Brighton & Hove Albion that lifted them into the Premier League's top four on Tuesday.

Ronaldo, without a goal since December and dropped to the bench by interim manager Ralf Rangnick in some recent matches, answered his critics five minutes after halftime with a superb finish after being played in by Scott McTominay.

Brighton had been the better side before halftime with United again looking disjointed and lacking spark.

But their hopes of responding after falling behind were damaged when Lewis Dunk was sent off after a foul on Anthony Elanga, an initial yellow card being upgraded to red.

Even then United were unconvincing and Brighton's Jakub Moder curled an effort against the crossbar before former United striker Danny Welbeck headed over a late chance.

Bruno Fernandes gave the scoreline a flattering look with a well-taken solo goal in stoppage time as United moved above West Ham United into the fourth spot with 43 points from 25 games.

The opening 45 minutes were tough to watch for United fans with Brighton looking the more polished side.

But for a sensational save by David de Gea to deny Moder's header, the boos at halftime would have been louder.

Ronaldo changed the mood, however, after the break.

ALSO READ: Kylian Mbappe's only focus will be on knocking out Real Madrid, says Ancelotti ahead of PSG clash

He had gone six games without a goal, his driest spell at club level since a run of seven games without scoring between December 2008 and January 2009.

Some have even suggested his second spell at United was fizzling out but his goal against Brighton was vintage Ronaldo.

When Brighton lost possession and McTominay fed Ronaldo he swerved away from three defenders and with minimal backlift, smashed a shot past Brighton keeper Robert Sanchez.

"An amazing goal," Rangnick said. "Not only an important one but an amazing goal and I think overall it was a good performance by Cristiano.

"Energetically, he was always trying to help teammates and I think in the last weeks definitely the best performance by him and a very, very important goal for us."

Brighton got themselves in trouble again soon afterwards trying to play out from the back and Dunk was too casual, losing the ball to Elanga who he then dragged back.

Despite being down to 10 men Brighton continued to cause United problems and it was quite a relief for the hosts when Fernandes broke away from the halfway line and sat Sanchez down before tucking away a fine goal.

It was only ninth-placed Brighton's second away league defeat of the season and manager Graham Potter could only marvel at Ronaldo's quality.

"Cristiano Ronaldo is absolutely amazing, world-class. There's nothing else to say with that."