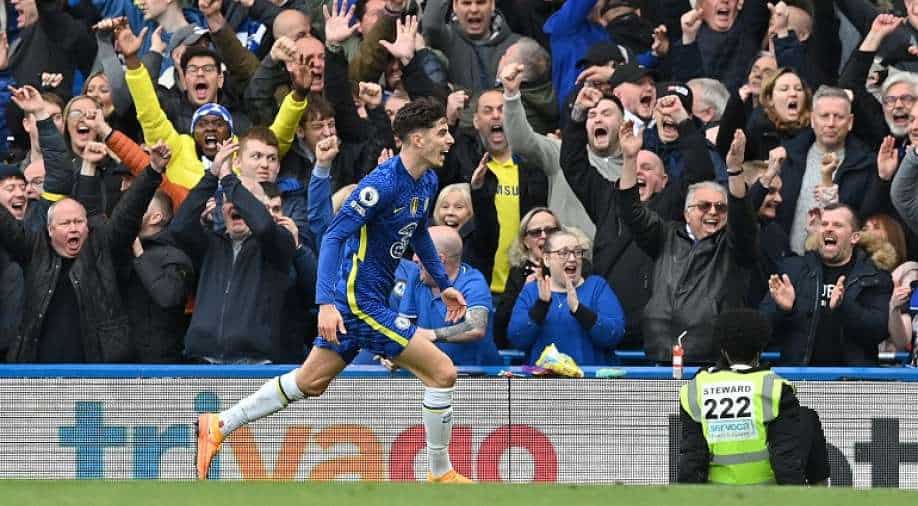 Chelsea put aside their off-field turmoil to keep a grip on third place in the Premier League with a 1-0 win over Newcastle United while Arsenal registered a 2-0 victory over Leicester City on Sunday.

Chelsea put aside their off-field turmoil to keep a grip on third place in the Premier League with a 1-0 win over Newcastle United while Arsenal leapfrogged Manchester United into fourth with a 2-0 victory over Leicester City on Sunday.

Everton's plummet towards the relegation zone continued as they lost 1-0 at home to Wolverhampton Wanderers but Leeds United gained some respite with a last-gasp 2-1 win over bottom club Norwich City.

Leaders Manchester City, who are three points ahead of Liverpool, are at Crystal Palace on Monday.

Liverpool won 2-0 at Brighton on Sunday.

The 19-year reign of Chelsea's owner and backer Roman Abramovich effectively came to an end this week after the UK government imposed sanctions on the Russian, with the club operating under a special licence.

With the club up for sale and dealing with a series of restrictions on their current operations, it was perhaps not surprising that Chelsea were far from their best against Eddie Howe's improving Newcastle.

But with the match seemingly heading for a draw, Jorginho launched a long pass over the Newcastle defence to Kai Havertz and the German's brilliant control allowed him to fire past Martin Dubravka for his fourth goal in three league games.

Chelsea's German manager Thomas Tuchel said the team had a responsibility to those at the club facing a much more difficult situation than the playing and coaching staff.

"There are a lot of people that I see on a daily basis who are worried and who work for decades. They are not so famous but they are worried for a pretty close future, wonder if things will be alright," he said.

"So for them, it's important to have the attitude right and also to focus on that and see the responsibility and what this means to these people. Even if it's just for 90 minutes," he added.

Goals from Thomas Partey and Alexandre Lacazette earned Arsenal a comfortable 2-0 win over Leicester at the Emirates.

Arsenal have now won their last five games and a run of nine wins from their last eleven encounters in the Premier League has transformed their season after a poor start to the campaign.

Partey opened the scoring with an 11th-minute header and Lacazette made sure of the win, after the break, from the penalty spot.

Arsenal have a great chance to return to Champions League football for the first time since the 2016/17 season but Arteta said work remained to be done.

"We have to be there, we should be there. Our history obliges to be there but we are not there yet and there are still a lot of games to play," he said.

Everton suffered their fourth straight defeat thanks to a 49th-minute header from Wolves defender Conor Coady leaving Frank Lampard's team only above the relegation zone on goal difference.

The Toffees are in 17th place on 22 points, the same as 18th placed Watford and just one more than 19th placed Burnley.

Leeds United have similar concerns to the Merseysiders but their survival hopes were boosted by a 2-1 win at Norwich which moved them four points above Everton.

Joe Gelhardt came off the bench to score a stoppage-time winner and give American coach Jesse Marsch his first win since replacing Marcelo Bielsa.

Rodrigo had put Leeds ahead in the 14th minute but their hopes of three points looked to have been dashed by Kenny McLean's stoppage-time leveller.

But then 19-year-old Gelhardt, who had been on the field for less than two minutes, tapped in from close range to the relief of the Elland Road crowd.

Roy Hodgson's Watford showed they are determined to fight for survival with a 2-1 win at Southampton earned by two goals from Cucho Hernandez.

Ukrainian Andriy Yarmolenko was on target for West Ham in their 2-1 win over Aston Villa.