Pliskova revels in 'top win' over Wozniacki at WTA Finals 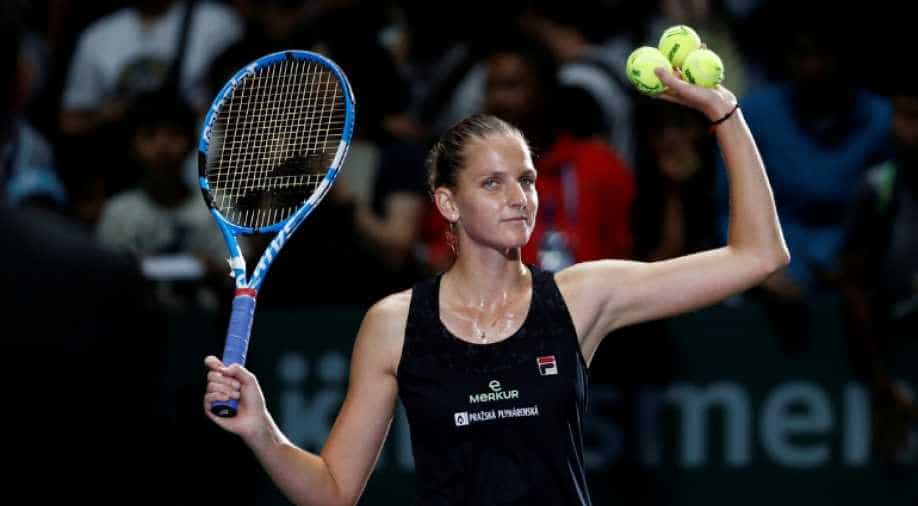 Pliskova has not enjoyed a great record against the defending champion, trailing 6-3 in head-to-head meetings before their latest encounter, but she served brilliantly this time to banish the memory of last year's loss to the Dane.

Karolina Pliskova was delighted to gain a modicum of revenge against Caroline Wozniacki at the WTA Finals on Sunday after the big-serving Czech opened her campaign with a 6-2 6-4 win over an opponent who knocked her out in the semi-finals a year ago.

Pliskova has not enjoyed a great record against the defending champion, trailing 6-3 in head-to-head meetings before their latest encounter, but she served brilliantly this time to banish the memory of last year's loss to the Dane.

The pair had not faced each other this season which was unusual, Pliskova told reporters after opening her White Group campaign with a win.

"I remember last year we played a lot. So I was just happy that I got this top win against a top player. So it's always very positive, always gives me extra confidence to beat a player like this," Pliskova said.

"And especially her, you really have to beat because she's not going to give you anything.

"She was missing a lot in the first set, but she played much better in the second and I had to really fight for it. I was just happy that I closed it out in the second."

In their meeting a year ago, Pliskova was broken five times as Wozniacki battled to a 7-6(9) 6-3 triumph, so she was elated to have saved every break point the Dane earned in their rematch on Sunday.

"I know my serve was quite okay today. The percentage was pretty high. I just tried to hit first serves. The surface here, if you try to mix the speed, it's working well. So I tried to do that.

"I played pretty well on my service games. Not always under control, but she's a good player so she's going to put a lot of balls back, make you work for it. I'm pretty happy with the performance."

Wozniacki was obviously disappointed to lose her first round robin match but the Australian Open champion will be looking to recover in her second tie against Petra Kvitova on Tuesday.

"I think with someone like Petra, she can play maybe not as well in one match and extremely well in the next. I think you don't really know what to expect. I just have to be out there and ready for everything," Wozniacki said.

"I have a few things to work on, but there are still some positives to take with me.

"The good thing I suppose with this format is you're not out. You still have a chance. So I'm going to try to use my second life out here and try and get through."

Ukraine's Elina Svitolina is the other player in the group.