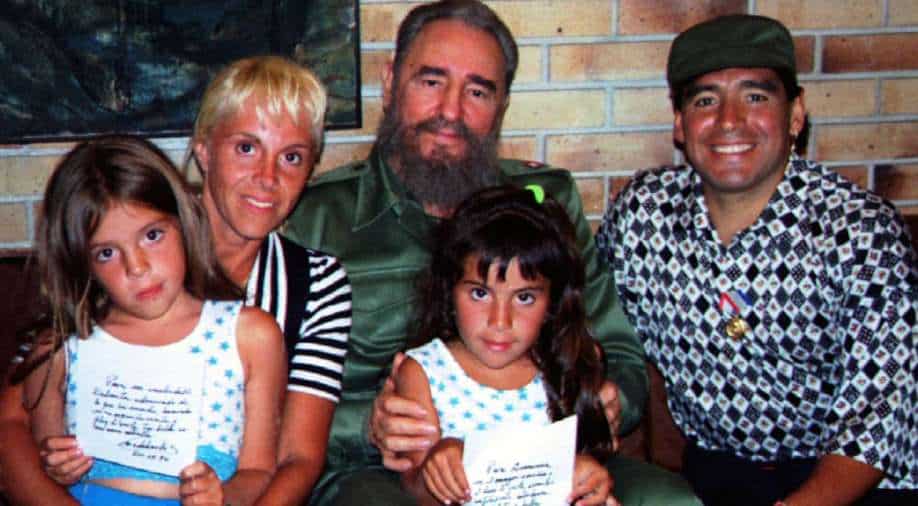 Former Reuters Cuba correspondent Andrew Cawthorne recalls taking the field with Diego Maradona, who died on Wednesday, in this Reuters story from 2004.

Former Reuters Cuba correspondent Andrew Cawthorne recalls taking the field with Diego Maradona, who died on Wednesday, in this Reuters story from 2004.

As I stepped up to take the penalty in Cuba’s national soccer stadium, a bloated but grinning Diego Maradona wiped and placed the ball, whispered words of advice and clasped his hands in prayer.

Inevitably, I scuffed the ball into the goalkeeper’s arms. “You struck it well, you’ll do better,” Maradona lied.

The foreign press lost 6-0 to a Maradona friends’ XI on that rainy evening in Havana in June, 2000 - a defeat that fulfilled a boyhood fantasy of playing alongside one of the world’s greatest footballers.

Maradona was in Cuba to receive free medical treatment for his drug and alcohol problems. His manager Guillermo Coppola had quietly asked us to avoid tackling the then grossly overweight Argentine so as not to humiliate him.

But the humiliation was all ours as Maradona, despite his awful state, used his innate vision and skill to score two long-range goals past our chain-smoking goalkeeper.

That was one of several games I played with Maradona. He had arrived in Cuba earlier in the year after nearly dying in Uruguay and used the kick-arounds to build up fitness.

The Cuban Football Federation laid on their national Pedro Marrero stadium — complete with post-match masseurs — that night in the great man’s honour. At other times, we just played on pitches in a field and behind a hotel.

Every time he scored, Maradona’s goal celebrations were the same I remembered from his glory days, beating England en route to winning the World Cup in Mexico in 1986 or helping transform Napoli’s fortunes in Italy.

Fists clenched, arms raised, head tilted back, eyes to the heavens, Maradona would whoop in delight before falling to the ground or running wildly across the pitch to celebrate.

“What a wonderful feeling to score a goal. I love this game. This is my life,” he roared in ecstasy during one five-a-side.

I had Reuters colleague Alfredo Tedeschi to thank for my friendship with Maradona in Cuba.

‘DO THEY HATE ME IN ENGLAND?’

A TV cameraman and fellow Argentine, Tedeschi infuriated Maradona so much with his paparazzi-style tactics that the footballer punched through his car window in anger within a few days of coming to Cuba to get out of the limelight.

Tedeschi was also a larger-than-life character and the pair made up within days with a bearhug and a barbecued steak.

After that Maradona began visiting his house nearly every day, enjoying Tedeschi’s fine wines and thick steaks to the surprise of those of us who thought he was on a strict diet.

Watching his beloved Boca Juniors or the Argentine national team live via a special satellite link Tedeschi had organised just for him, Maradona would scream like a madman at the referee and celebrate goals by diving fully clothed into Tedeschi’s swimming pool.

One night, over cigars and wine after dinner, I posed him the question I had been longing to ask: “So how did it feel to score those two goals against England in 1986?”

I feared he would be bored to answer it yet again but to my delight, Maradona — aware of the uncritical adulation from myself and Tedeschi’s two boys sitting with us — launched into an hour-long reminiscence.

He laughed at the famous “Hand of God” goal, before asking with real concern “Do they hate me in England?”.

Then he talked us through every swerve and swivel of his famous waltz through England’s team for arguably the best goal in the history of the World Cup.

Maradona’s pipe-dream was to manage a big club. “Manchester United or Real Madrid would do”, he said half-seriously, his ego and desperation to stay in the game blinding him to how badly his reputation had been shattered by his drug problem.

During one game on Tedeschi’s television, Maradona rushed up to the set at halftime when a publicity spot showed him as a teenager. “That’s me, look at me!” he shouted like a kid.

His delight was unbounded when, following a discreet mobile telephone call from Coppola to a Buenos Aires TV contact, the camera swung round to show his daughter standing in the crowd.

In Havana, Maradona met his own hero, Cuban President Fidel Castro, several times. Once, behind closed doors at Havana’s Revolution Palace, he taught the septuagenarian, baseball-loving revolutionary how to dribble a soccer ball.

Maradona showed off to Cuba’s “Maximum Leader” a tattoo of Castro that the Argentine had on his left shin, and another longer-standing tattoo of Argentine revolutionary Ernesto “Che” Guevara on his right shoulder.

“I’m not communist, but I’m ‘Fidelista’ to my death,” Maradona told us later.