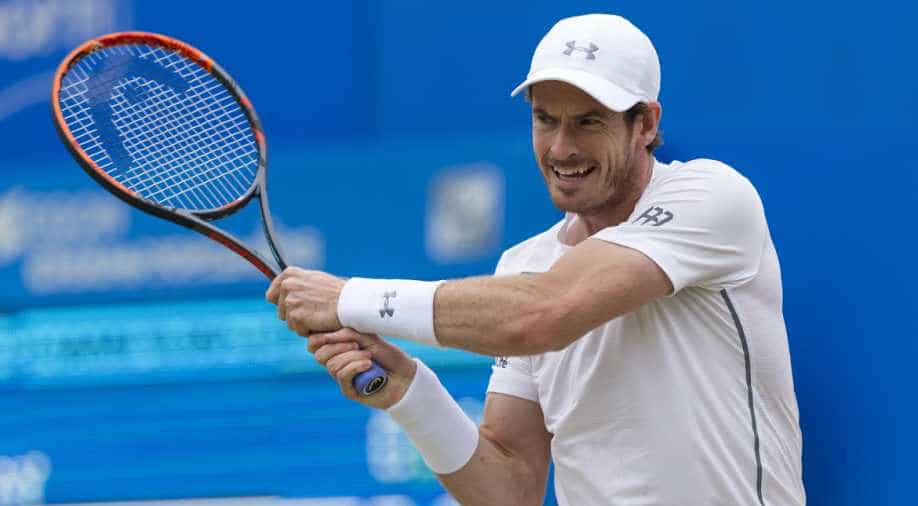 This is a winning start for Murray's renewed coaching relationship with Ivan Lendl. Photograph:( Getty )

Follow Us
Andy Murray became the first player to hold aloft the super-sized Queen's Club trophy for a fifth time after he beat big-serving Canadian Milos Raonic 6-7(5) 6-4 6-3 in the final of the Aegon Championships on Sunday.

The British top seed's title hopes appeared to be faltering when he trailed by a set and 3-0 down in the second but the 2013 Wimbledon champion drew on his greater grasscourt pedigree to turn the match around.

Murray, who also hoisted the trophy in 2009, 2011, 2013 and 2015, had shared the previous record of four Queen's titles with seven other men, including Boris Becker, Roy Emerson and Raonic's new grasscourt coach John McEnroe.

However, a backhand volley into the net from Raonic allowed Murray to climb to the top of the pile and celebrate a winning start to his renewed coaching relationship with Ivan Lendl.

"This tournament has loads of history... it's a pleasure to play in front of someone like John (McEnroe)... and any time you can do something a bit better than someone like him, it's an amazing feeling," Murray said during the presentation ceremony. "To win here for a fifth time means a lot to me."

While McEnroe was among those applauding the champion, Lendl performed a swift disappearing act from Centre Court even before Murray had a chance to celebrate his victory.

"It was nice of Ivan to stick around for the presentation," joked Murray, who successfully defended the title at the Wimbledon warm-up tournament for the first time in his career.

Raonic's gamble to hire seven-times grand slam champion McEnroe appeared to be paying off as he looked set to win his first title on the lush green surface midway through the second set. The Canadian had reached the final without dropping serve all week and when he led 3-0 in the second set, it seemed that Murray would also fall under his spell.

But a blistering cross-court service return in the fifth game allowed the Scot to finally break Raonic's momentum and from then on the Canadian third seed, who hurled down 14 aces, was powerless to stop Murray's victory charge.

"Congratulations to Andy for winning this tournament for a fifth time but I'm sure it's not nearly as special as having your first fathers' day as well," Raonic said after contesting his first grasscourt final. "It's my first grass match on a Sunday and hopefully we can have a rematch in a couple of Sundays. I'm feeling pretty good."

Following runner-up finishes at the year's first two majors in Melbourne and Paris, Murray will now hope his decision to re-hire Lendl will allow him to add to the two grand slam titles he won during his first stint with the Czech-born great.