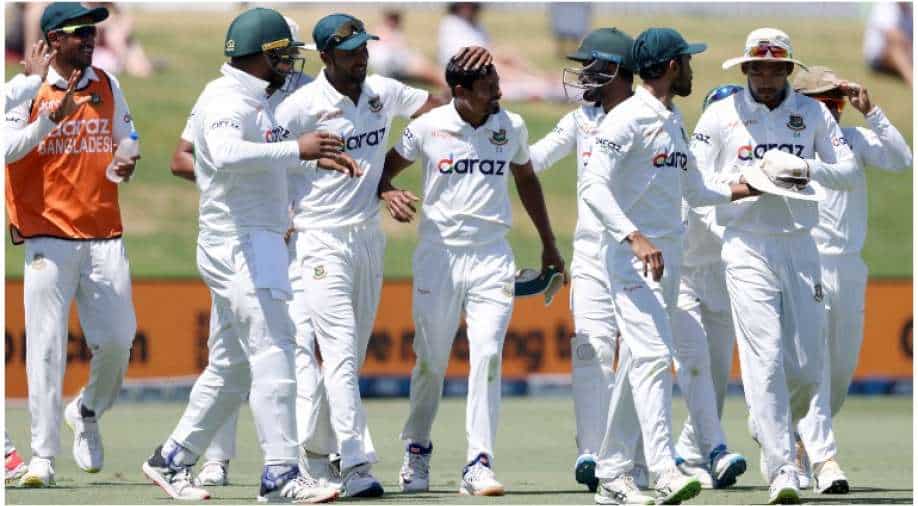 Needing 40 runs for the win, Bangladesh wrapped up the chase in overs with Mominul Haque (13*) and Mushfiqur Rahim (5*) remaining unbeaten at the crease.

Ebadot Hossain picked up a six-wicket haul in the second innings as Bangladesh defeated New Zealand by eight wickets in the first Test of the two-match series here at the Bay Oval, Mount Maunganui on Wednesday. With this win, Bangladesh has become the first team to defeat New Zealand in New Zealand in a Test match since March 2017. This is also Bangladesh`s first Test victory over the BlackCaps.

Needing 40 runs for the win, Bangladesh wrapped up the chase in overs with Mominul Haque (13*) and Mushfiqur Rahim (5*) remaining unbeaten at the crease. For New Zealand, Tim Southee and Kyle Jamieson picked up one wicket each in the second innings. Earlier, resuming Day 5 at 147/5, hosts New Zealand managed to add just 22 more runs to the total, setting Bangladesh a target of just 40 runs for the win.Kyle Jamieson and Tim Southee were dismissed for a duck on the final day of the Test while Trent Boult scored eight runs. For Bangladesh, Ebadot Hossain picked up six wickets in the second innings while Taskin Ahmed scalped three.