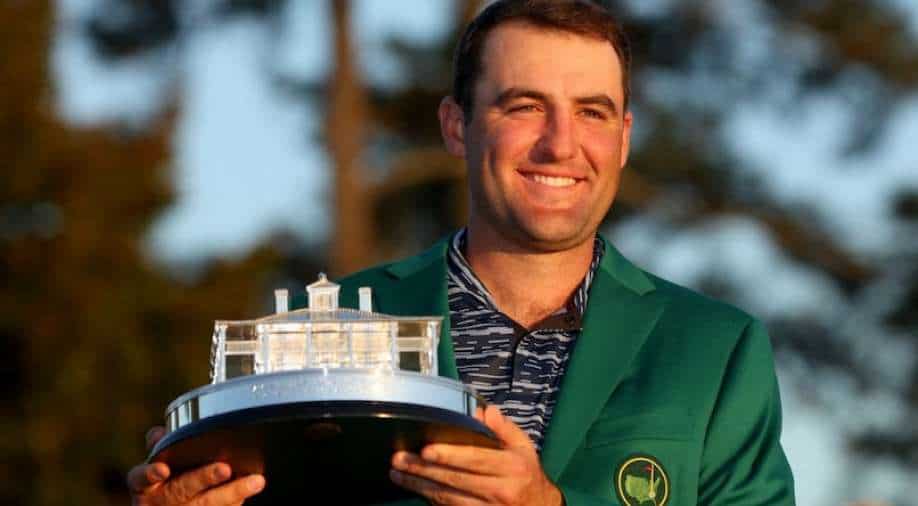 Scheffler held off the chasing pack to further cement his position as No. 1 on the FedEx Cup standings and Official World Golf Ranking. The American also became the sixth player to win in his first PGA Tour start as world No. 1 and sixth world No. 1 to win the Masters as he aggregated 10-under 278 for the tournament.

In-form American and current world No. 1, Scottie Scheffler carded a final round 71 at the famed Augusta National to earn his first major title and fourth win on the PGA Tour here on Sunday. Scheffler, who went 10-under for the tournament, finishing three strokes ahead of Northern Ireland`s former world No. 1 Rory McIlroy, became the first player to win four times in a six-start stretch on the PGA Tour since Australian golfer Jason Day in 2015.

Scheffler held off the chasing pack to further cement his position as No. 1 on the FedEx Cup standings and Official World Golf Ranking. The American also became the sixth player to win in his first PGA Tour start as world No. 1 and sixth world No. 1 to win the Masters as he aggregated 10-under 278 for the tournament.

Tiger Woods finished 47th in his first start since the 2020 Masters and some 14 months after a horrific car mishap, which led to serious leg injuries. Among Asians, South Korea`s Sungjae Im settled for a second top-10 finish in three starts at the Masters. A cold putter proved to be a bane for the 24-year-old in his chase for major glory as he signed for a disappointing 3-over 75, finishing nine back of Scheffler.

ALSO READ | Just going play my game: Tiger Woods 'proud' of himself after battling to stay in Masters hunt

Defending champion Hideki Matsuyama closed with a 72 to finish tied-14th, which was a commendable effort considering he was battling a back injury for a month leading up to the Masters.

After missing birdie attempts on his first three holes, Im dropped the first of six bogeys at the par 3 fourth hole, and it was subsequently uphill for the two-time PGA Tour winner, who was runner-up in his Masters debut in 2020.

"It was a little bit disappointing. I missed a lot of putts," rued Im, who averaged 1.83 putts per green in regulation, his highest of the week. "Overall, I think top-10 is good, and I am happy especially when I didn`t play well."

The top-10 guaranteed a quick return to the year`s first major which Im intends to keep knocking on the door as he feels Augusta National is suited to his precision game. "It is good to secure an invitation early," said Im, who was the first-round leader following a 67.

"I will keep the same strategy... play for the cut, and then try to compete for a win. The Masters was my dream since I was a kid and watched this on TV. I always hoped to play at Augusta National and compete with the greatest golfers, and competing for the trophy. This is huge."

Im leaves Augusta National with every belief he has garnered greater knowledge and understanding of the nuances at the challenging layout.

"Accuracy is more important than power here. Finding the right side of the green is key. It is very important to place the ball where you can make par. If not, you can easily three putt," he said.

"I was top of the leaderboard and was able to compete for a win. It was also the first time I played in front of patrons and I enjoyed the atmosphere and roars. It makes the tournament enjoyable and I will never forget this experience."

Matsuyama, who made history as Asia`s first Masters winner 12 months ago, traded five birdies against as many bogeys as he held his head high to finish inside the top-15. He later presented the Green Jacket to Scheffler, who defeated Rory McIlroy of Northern Ireland by three strokes with his 10-under 278 aggregate.

"I`m happy I was able to play all four days," said Japan`s first male major champion. "I struggled to play the type of golf that I was envisioning. I wish I was able to contend a little more."