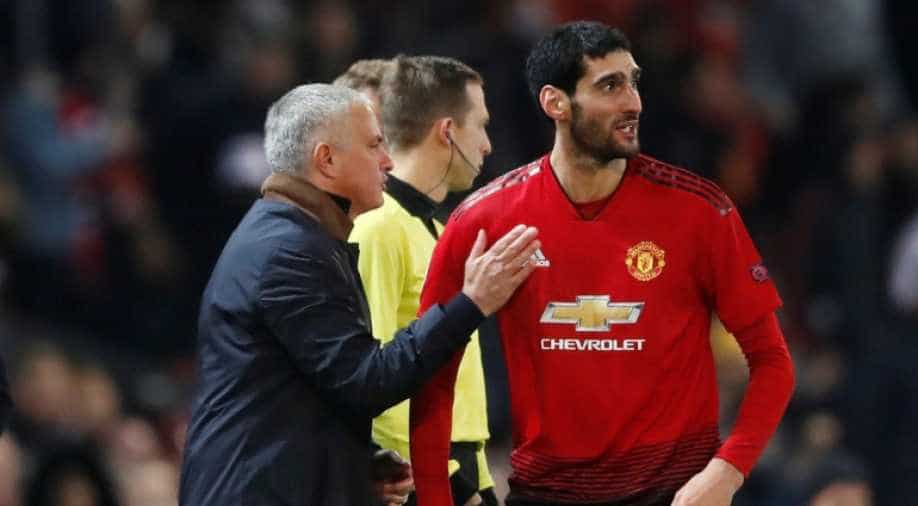 The late win after another sub-par performance at least ensured United qualified from Group H.

Manchester United's Marouane Fellaini struck a controversial stoppage-time winner to bring blessed relief to Old Trafford after a laboured 1-0 win over Young Boys edged them into the Champions League last 16 on Tuesday.

United's struggles at home and their fans' disenchantment had looked set to continue as it seemed that, for the first time in their history, they were going to fail to score at their own ground in a European tie for three matches in a row.

Yet, after largely dominating the match while being betrayed by a blunt edge up front, Belgian Fellaini turned to shoot home in the 91st minute, despite the ball appearing to come off his hand as he swivelled to strike it.

"For me it was not a handball," he told BT Sport. "If it touched my hand, it was not on purpose."

United, though, were also grateful for the right hand of goalkeeper David de Gea, who made a truly remarkable second-half save at full stretch from a deflected Ulisses Garcia strike, clawing the ball off the line at full stretch.

It was so brilliant that it even prompted United manager Jose Mourinho to hail the Spaniard as "the best goalkeeper in the world."

The save came as the Swiss champions grew in confidence in the second half, encouraged by the prosaic efforts of United, who struggled to create chances and squandered the few they did fashion.

Marcus Rashford, one of their livelier players, was also their most wasteful, missing five opportunities, including an outstanding one in the opening five minutes.

The relief around Old Trafford when Fellaini turned to fire his effort through the legs of defender Loris Benito was so pronounced that an emotional Mourinho even picked up and hurled the pitchside drinks holder furiously to the ground.

The late win after another sub-par performance at least ensured United qualified from Group H as they moved on to 10 points, two behind leaders Juventus who beat Valencia 1-0 to eliminate the Spaniards who have five. Young Boys are on one.

"The most important thing is to qualify and for some of my lovers, and those that like stats, I am 14 seasons in the Champions League and 14 times my teams have qualified through to the group stages," Mourinho told BT Sport.

"The season I was not in the Champions League, I won the Europa League."

On a wet night at Old Trafford enlivened by the sight of 3,000 visiting fans all in yellow rain macs cheering on the underdogs, United began brightly, even with Mourinho having left Paul Pogba on the bench and omitted Alexis Sanchez.

The Frenchman scored twice in the corresponding fixture in Berne when United won 3-0 and it looked from the start, as Rashford chipped over when one-on-one with keeper David von Ballmoos, as if it could be a comfortable night for the hosts.

Rashford forced another sharp save from Von Ballmoos on the quarter-hour and fired one wide 10 minutes later with his exciting approach play betrayed by poor finishing as United began to perform in now-familiar stodgy fashion.

Young Boys created barely an opportunity but could have sneaked the lead just before halftime had it not been for Djibril Sow's attempt at an over-elaborate back-heel finish.

Rashford's profligacy continued after the break when he sliced wide with his left foot before Fellaini hoiked another volleyed opportunity skywards.

It all encouraged the visitors to come out of their shells and Garcia forced the incredible stop from De Gea as the Swiss side looked increasingly dangerous.

"We're thankful for David pulling off an unbelievable save but we dug in there, kept going and, okay, it wasn't pretty but we won the game." said United defender Phil Jones.

"It takes the pressure off going to Spain but we need to finish the group strongly."