Mahrez scores as Algeria qualify for Africa Cup of Nations 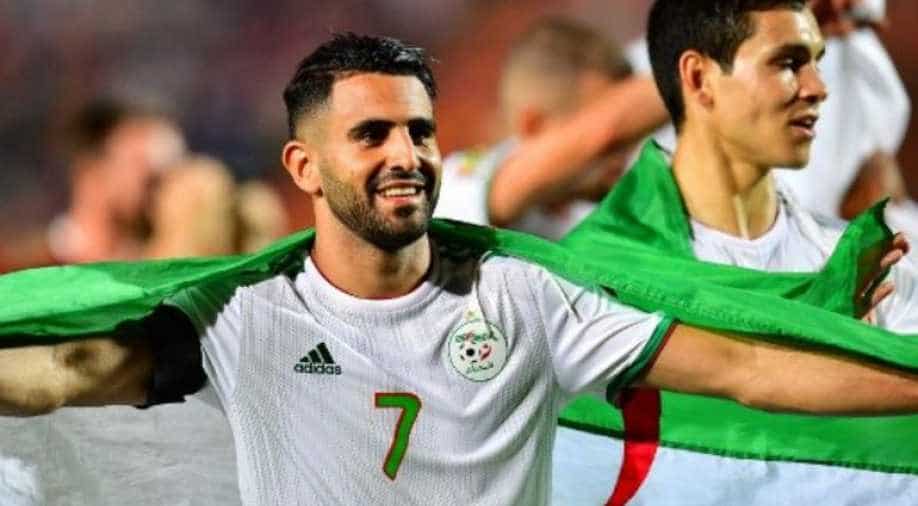 Manchester City winger Riyad Mahrez scored as title-holders Algeria drew 2-2 in Zimbabwe Monday and became the third country to book a place at the 2021 Africa Cup of Nations.

Manchester City winger Riyad Mahrez scored as title-holders Algeria drew 2-2 in Zimbabwe Monday and became the third country to book a place at the 2021 Africa Cup of Nations.

Cameroon qualify automatically as hosts while Senegal secured a spot Sunday by winning in Guinea-Bissau thanks to a Sadio Mane goal.

Andy Delort and captain Mahrez gave the Desert Foxes a two-goal advantage in Harare that was halved just before half-time when Knowledge Musona netted.

Algeria coach Djamel Belmadi took off Delort and Mahrez as he made five second-half substitutions within 12 minutes, but the bold move backfired when Prince Dube equalised eight minutes from time.

Drawing ended the perfect three-win record Algeria took into a match played behind closed doors because of the coronavirus, but it guaranteed them a top-two finish in a section including Zambia and Botswana.

Zambia, hoping for a resurgence under Serb coach Milutin 'Micho' Sredojevic, suffered a blow to hopes of accompanying Algeria from Group H when they fell 1-0 away to Botswana.

Mosha Gaolaolwe scored what proved the only goal in Francistown after just six minutes and it lifted Botswana to third, one point behind Zimbabwe.

This was the third loss in four group matches for 2012 African champions Zambia, who will host Algeria and visit Zimbabwe during the final two matchdays next March.

Uganda suffered a shock loss 1-0 away to South Sudan and Burkina Faso drew 0-0 in Malawi to miss out on chances to qualify from Group A.

Uganda-born Tito Okello condemned his country of birth to a first defeat in the section when he converted a first-half penalty in a qualifier marred by two red cards.

Khalid Aucho got a straight red to leave Uganda with 10 men for an hour while South Sudan substitute Abdallah Musa was yellow-carded twice and sent off during 15 minutes on the pitch.

Making the victory more memorable for South Sudan was the fact that they had to play the 'home' fixture in Kenya because the national stadium in Juba is being renovated.

Sao Tome, who are 110 places behind South Africa in the world rankings, lost Ivonaldo Mendes nine minutes from time when he was red-carded following a second caution with the sides level.

The minnows held on for six minutes before Belgium-based Tau gave South Africa the lead for the second time in the see-saw struggle and Zwane put the outcome beyond doubt.

Victory took South Africa to nine points, equal with Ghana but behind on head-to-head records. Sudan are the other contenders for a top-two place.

Modou Barrow and Musa Barrow scored to put the Scorpions in control until a late goal from Bruno Ecuele Manga created a tense finish.

Cameroon are part of the qualifying competition to gain match practice and increased their Group F lead to six points after a 2-0 win in Mozambique with Vincent Aboubakar among the scorers.

In Manzini, eSwatini were eliminated and Congo Brazzaville strengthened a grip on second place behind Senegal after a 0-0 draw.