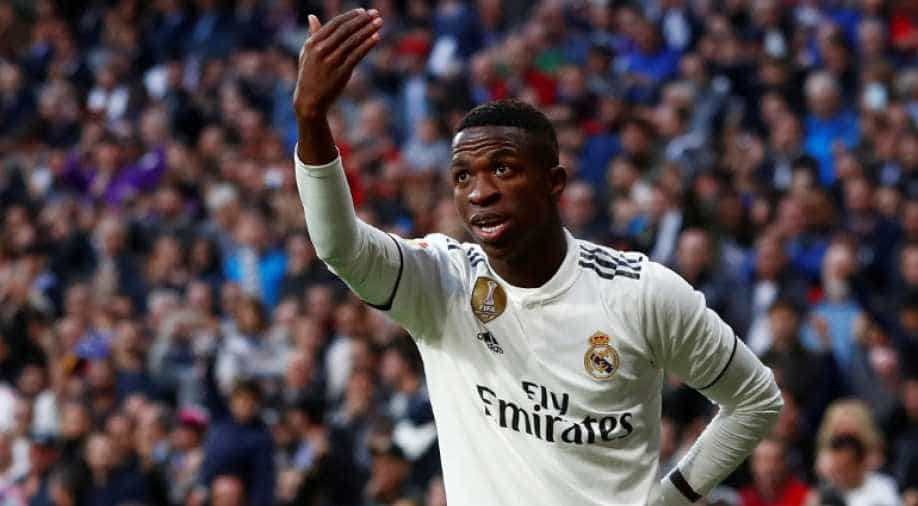 Real Madrid missed the creativity of the injured Eden Hazard as only a fortuitous goal from substitute Vinicius Junior earned them a 1-0 victory over Real Valladolid in La Liga on Wednesday.

Real Madrid missed the creativity of the injured Eden Hazard as only a fortuitous goal from substitute Vinicius Junior earned them a 1-0 victory over Real Valladolid in La Liga on Wednesday.

Vinicius capitalised on some chaotic defending in the Valladolid penalty area after coming on for Luka Jovic, Madrid's misfiring striker who was committed but ultimately fruitless again in front of goal.

"We know we have to improve and we are going to," said Zinedine Zidane.

Jovic could yet be allowed to leave before the end of the transfer window on Monday and he must have looked on enviously as a simple chance fell to Vinicius to give Madrid their second win of the season.

But the lack of goals only served to highlight the absence of Hazard, who had been due to make his first appearance of the season only to pull out of the squad earlier on Wednesday with a muscle injury in his right leg.

Hazard sat out Madrid's opening two games, with Zidane adamant the Belgium midfielder needed to be fully fit and completely pain free from the troublesome ankle problem he struggled with last term.

Yet a separate injury means Hazard is now expected to be out for at least another two weeks, leaving Madrid to cope without their 100 million euros ($117 million) signing, just as they had to for prolonged periods during his opening year.

"It's a little thing," said Zidane. "I don't know if it will be days or weeks but it isn't much."

With Gareth Bale and James Rodriguez gone, the attacking onus will fall on the likes of Vinicius, even if Zidane preferred to start with the Brazilian on the bench and give Jovic another chance to impress alongside Karim Benzema.

"We lacked a bit of rhythm, we needed to the move the ball faster," added Thibaut Courtois.

"If you don't move the ball fast, it's easy for them to defend. In the second half we were better."

Jovic, who has scored only two goals since joining from Frankfurt for 60 million euros in July 2019, could not be faulted for a lack of effort and was arguably Madrid's busiest attacking player in the first half.

But two good chances went begging and Zidane finally brought on Vinicius just before the hour.

Seven points from nine continues a solid start for the reigning champions, with Barcelona due to play away at Celta Vigo on Thursday.

Earlier, Atletico Madrid followed up their 6-1 thrashing of Granada on Saturday with a much less spectacular goalless draw away at Huesca.

Valladolid are still without a victory after four games, having only managed draws at home to Real Sociedad and Celta Vigo.

Jovic was involved early for Madrid, his driving run down the left giving Marcelo a sight of goal, before a speedy counter-attack ended with Fede Valverde sliding the ball across, but he fired over.

Jovic lashed into the side-netting after some good work by Luka Modric and then saw a header saved early in the second half, with Casemiro smashing the rebound against the crossbar.

With the game in the balance, Valladolid sniffed an opportunity. Waldo Rubio dragged wide from close range and then Shon Weissman raced forward and forced Courtois into a smart save.

But as the visitors were gaining in confidence, Madrid struck, Vinicius taking advantage of a string of defensive errors, the last committed by Bruno, his attempted clearance falling to the feet of the 20-year-old, who made no mistake.

Raul Garcia and Waldo went close to an equaliser before Modric hit the post late on.