As it happened | IPL 2019: Hyderabad beat Rajasthan by 5 wickets 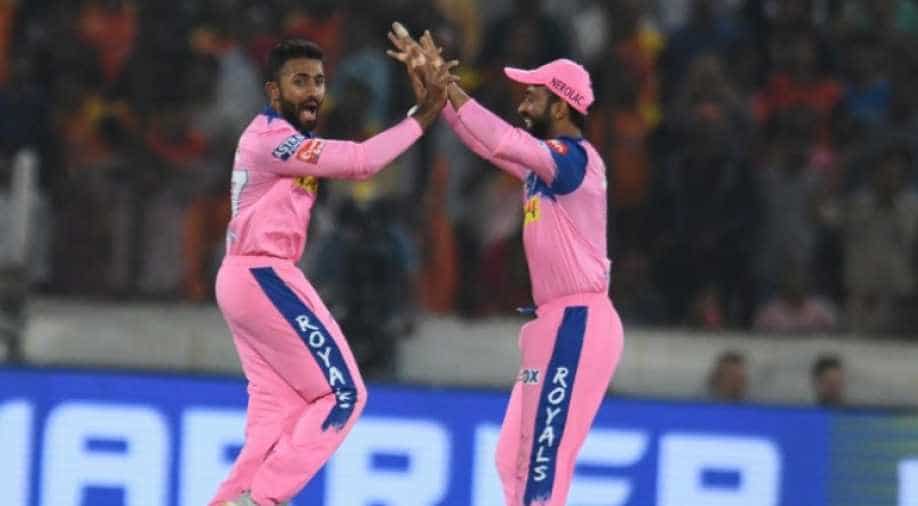 Sanju Samson's second IPL ton was overshadowed by David Warner's blistering fifty as Hyderabad beat Rajasthan by five wickets to register their first win in the ongoing edition of the tournament.

Shreyas Gopal to Shankar, catch out by Chopra.

Next batsman is Yusuf Pathan.

Unadkat to Williamson, catch out by Rahul Tripathi.

Soon after Warner, Jonny Bairstow also takes a walk back to the pavilion.

Shreyas Gopal to Bairstow, catch out by Dhawal Kulkarni again.

And what a brilliant catch.

Running catch at the long-off along with the boundary rope... just brilliant.

Next batsman is India's, Vijay Shankar.

Ben Stokes to Warner, catch out by Dhawal Kulkarni.

Warner departs after scoring 69 runs off 37.

Next batsman is Kane Williamson.

David Warner and Jonny Bairstow are leading the charge.

Hyderabad are 54/0 after five overs.

The opening pair have propplled team's chase to achieve the set target.

Hyderabad are off to steady start, are 34/0 after 3 overs.

After scoring the century, Samson said, "Feels good to score an IPL hundred, but this is just the start of the tournament and I got to stay grounded and do what the team wants."

A fine century from Samson and a knock of 70 by the Skipper, propel @rajasthanroyals to a total of 198/2.

"The pitch was a bit slow to start with, but with time it got easy. I think we have set a good target with our bowling line-up. But cricket is a funny game, anything can happen."

Opting to bat, Rajasthan made 198 for two against Sunrisers Hyderabad in an Indian Premier League at the Rajiv Gandhi International Stadium.

This might cost Hyderabad alot more then how it looks.

Skipper Ajinkya Rahane and Sanju Samson are leading the charge.

The skipper is leading from the front as he found a determined ally in Samson. Rahane is playing 24 at and Samson is at 31.

Samson has picked up pace quickly which is important for the team.

After nine overs, Rajasthan are 62/1.

The second ball of his first over, and he takes a wicket.

Buttlers walks back to pavilion after scoring five runs off eight balls.

Next batsman is Sanju Samson.

After three overs, Rajasthan are 15/0

Rajasthan openers Ajinkya Rahane and Jos Buttler are at the crease.

What the captains say:

Ajinkya Rahane:  "I don't know how this wicket will behave but I am sure that the wicket won't change much in the 40 overs, so looking to put runs and then defend."

Kane Williamson: "It looks like a good surface and it is important that we adapt with the ball first up and it's all about executing our skills and our plans."

Rajasthan skipper Ajinkya Rahane won the toss and elected to bat first against Hyderabad in an Indian Premier League match on Friday at the Rajiv Gandhi International Stadium.

Rajasthan have fielded an unchanged team, while Sunrisers have made two changes.
Kane Williamson has returned to lead Sunrisers in place of Shakib Al Hasan, while Deepak Hooda made way for Shahbaz Nadeem.

Hello and welcome you all, it is the Match 8 of Indian Premier League 2019.

Get live updates, stats and analysis of the match here.