As it happened: PAKvBAN: Pakistan defeat Bangladesh by 94 runs 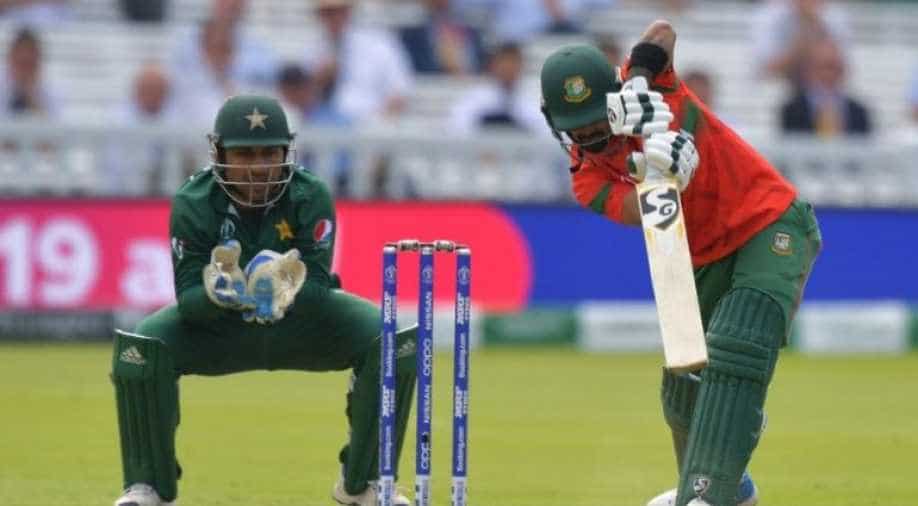 Pakistan beat Bangladesh by 94 runs in the match 43 of Cricket World Cup 2019 and ended their tournament on a winning note.

Pacer Shaheen Afridi took a six-wicket haul as Bangladesh were all-out for 221 in 45th over.

In the first innings, opener Imam-ul-Haq made a run-a-ball century and Babar Azam scored 96 to help Pakistan post a 315-9 even though they are effectively out of the semi-finals race.

Pakistan's abysmal net run rate meant the 1992 champions had no real chances of pipping New Zealand to the last semi-final slot, but Imam and Azam added 157 for the second wicket to lay the foundation for a big total.

Mohammad Saifuddin denied Azam a century when he trapped him lbw and Imam's innings ended in a hit-wicket dismissal when he retreated too much to break his own stump trying to flick Mustafizur Rahman.

Shaheen took the 6th wicket of the match and Pakistan defeat Bangladesh by 94 runs.

He gave 6 runs from in over.

Including a massive sixer on the 4th ball of the over.

Shaheen's 8th over, brilliant spell by this young fella.

Took 2 wickets and gave 2 runs in this over.

He became the youngest player to take a 5-wicket haul.

Next batsman is Mashrafe Mortaza.

Shaheen to Saifuddin, caught out by Mohammad Amir.

Saifuddin departed on a golden duck.

Next batsman is Mehidy Hasan.

He took an important wicket and gave 6 runs.

Shadab Khan to Mosaddek, caught out by Babar Azam.

Next batsman is Mohammad Saifuddin.

8 runs from this over.

Shadab Khan is back into the attack.

It's his 6th over and 5 runs from this over.

Including a beautiful boundary on the second last ball of the over.

4 runs from this over.

Wahab Riaz is nack into attack.

He took a crucial wicket also.

Shaheen Afridi to Shakib, caught behind.

Next batsman is Mosaddek Hossain.

Mohammad Amir is back into the attack.

Shahhen Afridi to Das, caught out by Haris Sohail.

Next batsman is Mahmudullah.

Fifty up for Shakib!

Shakib brings up his fifth fifty of #CWC19

To go with two hundreds.

And in his other innings he made 41.

His fifth fifty of the tournament.

They have crossed the 100-run mark.

Shakib is looking good with the bat, he will look to win the game to end the tournament on a winning note.

Their #CWC19 campaigns might be coming to an end before the knockouts, but Pakistan and Bangladesh's fans still had plenty of reasons to cheer after proud, hard-fought campaigns 🙌

Can their teams give them one more special moment today?#PAKvBAN pic.twitter.com/p3gSoWKwYS

Their final game and few of the players are playing their last World Cup game as well.

Next batsman is Mushfiqur Rahim.

Bangladesh have made a strong start to their chase of 316, reaching 47/1 after 10 overs.

The start has been good.

Mohammad Amir to Soumya Sarkar, caught out by Fakhar Zaman.

Chasing 316 to win, Bangladesh are off to a stable start.

Tamim Iqbal and Soumya Sarkar are at the crease to start the run chase.

Pakistan's abysmal net run rate meant the 1992 champions had no real chances of pipping New Zealand to the last semi-final slot, but Imam and Azam added 157 for the second wicket to lay the foundation for a big total.

Mohammad Saifuddin denied Azam a century when he trapped him lbw and Imam's innings ended in a hit-wicket dismissal when he retreated too much to break his own stump trying to flick Mustafizur Rahman.

Mustafizur to Amir, caught out by Rahim.

Next batsman is Sarfaraz Ahmed.

The captain will face the last ball and Mustafizur is on a hat-trick.

Mustafizur Rahman to Imad, caught out by Mahmudullah.

Next batsman is Shaheen Afridi.

Next batsman is Mohammad Amir.

Riaz came in to bat as a replacement for Sarfaraz Ahmed, who could not continue because of an injury around his elbow are.

He was hit by Saifuddin's ball.

Next batsman is Shadab Khan.

Mustafizur to Haris, caught out by Soumya Sarkar.

Haris has been struggling in from of rising deliveries.

Mehidy Hasan to Hafeez, caught out by Shakib.

Next batsman is Imad Wasim.

That's the worst way a batsman can loose his wicket.

Next batsman is Haris Sohail.

A maiden World Cup 💯 for Imam-ul-Haq 👏

It's been a brisk knock, coming off 99 balls. Can he add a final flourish to drive Pakistan to a huge total?#CWC19 | #PAKvBAN | #WeHaveWeWill pic.twitter.com/8tWdsWoHvz

It's his maiden World Cup hundred.

The chances of reaching the semis are diminishing as every over goes.

The task to score 400 looks improbable.

The current run rate is 5.64 and from here the projected score is 282.

If they increase the run rate to 8 runs per over, then the projected score would be 313.

Babar Azam out, fell 4 runs short of his century.

The on field decision was out, although Babar went upstairs to review it but three reds on the screen and he has to walk back to the pavilion after brilliant innings.

Next batsman is Mohammad Hafeez.

Babar has played some beautiful shots and he is looking good with the bat.

Pakistan need to score 400+ to have at least a chance to go further in the tournament.

Pakistan crossed 100-run mark in the 22nd over.

Both the batsmen are holding up at the moment as the team is looking to put up a high score.

Fifty up for Babar!

It's his fourth fifty-plus score of #CWC19 - what a tournament he's having 💪#WeHaveWeWill | #PAKvBAN pic.twitter.com/yQyftqK6sd

The score is 94/1, which is not even close to what Pakistan needed in this clash.

Imam-ul-Haq and Babar Azam are looking good at the moment and they are off to build a crucial partnership.

"Only chance we have is to bat first and put a big total on the board. So we will try our best," Sarfaraz Ahmed had said at the time of toss.

Not the ideal start skipper Sarfaraz would have wanted from the openers.

Pakistan need to build partnerships to score a big score in their bid to reach the semis.

Fakhar Zaman and Imam-ul-Haq are at the crease to open the innings and Mehidy Hasan has launched the bowling attack.

Both the teams are put on the ground to sing their national anthems.

The match will start in 10 minutes.

Pakistan have won the toss and opted to bat first against Bangladesh.

Mathematically, they still have a chance to make it to the last four.

"Obviously it's a hard time for the team, but we want to finish on a good note," said Pakistani pacer Wahab Riaz.

He admitted that the game against Bangladesh is a dead rubber but assures Pakistan will do all they can to entertain the crowd.

Pakistan trained hard ahead of their #CWC19 clash against Bangladesh at Lord's. The Men in Green will be keen to give their 💯 per cent in their final group game! #WeHaveWeWill pic.twitter.com/1geT5YJJ5S

🇧🇩 Shakib Al Hasan: "For me, there's no difference between the first and last ODIs of the tournament."
🇵🇰 Wahab Riaz: "We have played good cricket in the last three games and we hope to keep that momentum going."

Watch the latest installment of At The Nets ahead of #PAKvBAN ⬇️ pic.twitter.com/YyvnYdWdRN

Both the teams are ready for this intriguing clash.

The chances of rain in today's clash are minimal and the day is expected to be sunny.

Pakistan and Bangladesh have faced each other 36 times in the One-Day International format, with Pakistan having an upper hand over Bangladesh.

In World Cup history, both have previously clashed only once in the 1999 World Cup, and Bangladesh defeated Pakistan by 62 runs in the clash.

Sarfaraz Ahmed-led Pakistan team has a difficult task to pave their way to semi-finals of Cricket World Cup 2019 when they take on Bangladesh in the final group stage game at the Lord's.

If Bangladesh bat first, then Pakistan are out even before the game begins.

Pakistan are just below New Zealand, who are placed fourth with eleven points from nine matches and have a net run rate of +0.175 even after their loss to England.

Although, the scenario of the entering the semi-final is very difficult, however, Pakistan will try their luck as the skipper said that the team will look to score more than 500 runs against Bangladesh.

Hello! And welcome to the Match 43 of the Cricket World Cup 2019 which is between Pakistan and Bangladesh in London.