As it happened | AFGvAUS: Australia beat Afghanistan by 7 wickets 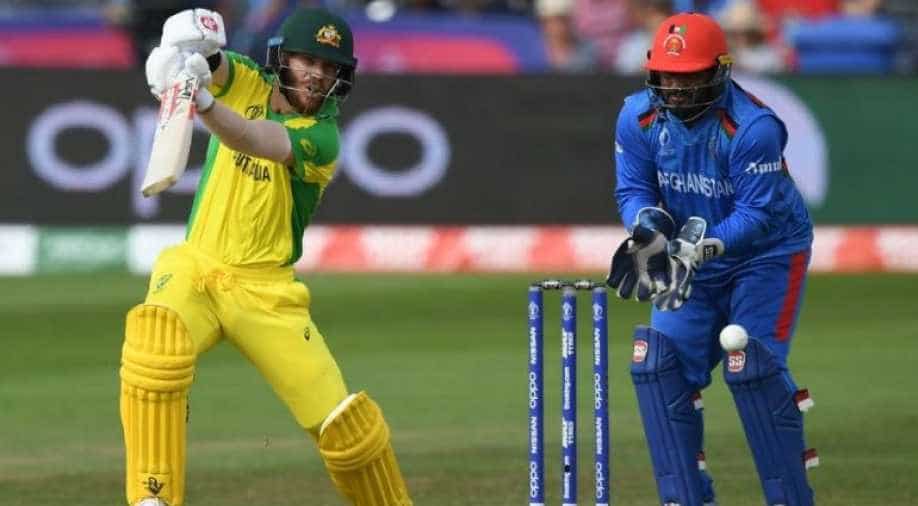 Match 4 of Cricket World Cup is between Afghanistan and Australia

Openers Aaron Finch and David Warner completed their half-centuries as Australia chased down the target of the 208-run target in 34.5 overs.

Finch scored a total of 66 runs off 49 balls and his innings included 6 fours and 4 sixes before losing his wicket to Gulbadin Naib.

Warner, who returned after a year-long ban, played a brilliant innings and scored an unbeaten 89 runs.

Steve Smith, who is also coming after serving a one-year ban, scored 18 runs.

Earlier, Australia's Pat Cummins and Adam Zampa took three wickets each as Afghanistan were bowled out for 207 in 39 overs.

Paceman Cummins finished with figures of 3-40 and leg spinner Zampa took 3-60 as the holders kept the brakes on their inexperienced but flamboyant opponents.

Afghanistan lost both of their openers in the first two overs but rallied with a half century from captain Najibullah Zadran and an aggressive cameo from Rashid Khan to creep over the 200-run mark.

Rahmat Shah steadied the innings with a 43-run knock after coming in at No. 3, but it was Najibullah and Gulbadin Naib who gave the Afghanis hope of a competitive total with a swashbuckllng 83-run sixth-wicket partnership off only 75 balls.

Najibullah, who won the toss and elected to bat, scored 51 off 49 balls while Gulbadin hit 31 off 33.

Rashid Khan also flashed his bat but his knock of 27 runs off 11 balls ended when Zampa trapped him leg before wickets.

All-rounder Glenn Maxwell is the next batsman.

Rashid Khan to Khawaja, lbw out.

What a comeback after one-year gap.

Gulbadin Naib gets the first breakthrough as he took Aaron Finch's wicket.

Naib to Finch, catch out by Mujeeb Ur Rahman.

Khawaja is coming at number three. He's used to open with Finch in the absence of Warner.

Australia have capitalised on the their good start.

The opening pair has played a responsible innings so far.

Australia are off to a stable start against Afghanistan.

It's must be an emotional moment for Warner here as he is returning to international cricket after a year gap.

"Credit to Afghanistan, they played some fearless cricket," says Zampa during the break.

Mujeeb Ur Rahman out after scoring 13 runs.

The positive intent of Afghanistan team has helped them to put up a decent target.

After playing a few big shots, Rashid Khan out.

Zampa to Rashid, lbw out.

Next batsman is Hamid Hassan.

Afghanistan lose another wicket, Zardan out after scoring 4 runs off 6 balls.

Mujeeb Ur Rahman is the next batsman.

Stoinis strikes again in the same over.

Next batsman is Dawlat Zadran.

Marcus Stoinis gets first wicket of this World Cup.

Next batsman is Rashid Khan.

Thanks to a brilliant fielding by Steve Smith.

Now, Nabi returns to the pavilion.

Next batsman is Najibullah Zadran.

Spinner Zampa to Shahidi, and stumped by the wicket-keeper.

Next batsman is Mohammad Nabi.

Cricket is a game of fine margins...

That's quite a start for the defending champions Australia.

Another wicket! Zazai out

Zazai also out without scoring a single run.

Next batsman is Hashmatullah Shahidi.

It's just the first over and Afghanistan lose its first wicket.

Next batsman is Rahmat Shah.

Afghan openers Mohammad Shahzad and Hazratullah Zazai are at the crease and Mitchell Starc will launch the bowling attack.

What the captains are saying:

Gulbadin Naib: We're batting first and hoping to put a good score on the board. Yes, they (Australia) are a champion side and we need to start well against them.

Aaron Finch: I would have batted first as well, looks a good wicket to put runs on the board. Not that hard on top and hopefully, we can get some movement early on.

Afghanistan win the toss and opt to bat.

The day is expected to be a fine, dry and warm day, with lengthy spells of sunshine.

Dry conditions might bring spinners into play as it did in Afghanistan's win against Pakistan last week.

Afghanistan are very new when it comes to international cricket. They have played two ODI games against Australia and lost both.

Steve Smith and David Warner will seek redemption on the biggest stage as they re-launch their one-day international careers for Australia at the World Cup.

The star batsmen were both banned for a year for their roles in a ball-tampering scandal but they have found form on their return to the international set-up.

Warner was the top run scorer in the recent Indian Premier League while Smith struck a hundred in a warm-up victory against England last weekend.

The defending champions have endured a tumultuous past year but the Aaron Finch-led side are peaking at the right time and are considered one of the favourites in the 50-over showpiece event.

After edging out hosts India 3-2 in a five-match ODI series in March, Australia welcomed back Smith and Warner with open arms.

The five-time champions will start as overwhelming favourites in Bristol against an Afghanistan side only playing their second 50-over World Cup.

Afghanistan's rise from associate-nation status to cricket's elite has been nothing short of a fairytale.

The minnows witnessed a captaincy change two months before the start of the World Cup, with little-known Gulbadin Naib named leader of the ODI side in place of Asghar Afghan, a move that did not go down well with some senior members of the team.

But the team have now settled to focus on their World Cup campaign.

Hello! And welcome to the Match 4 of the Cricket World Cup 2019 which is between Australia and Afghanistan at County Ground, Bristol.