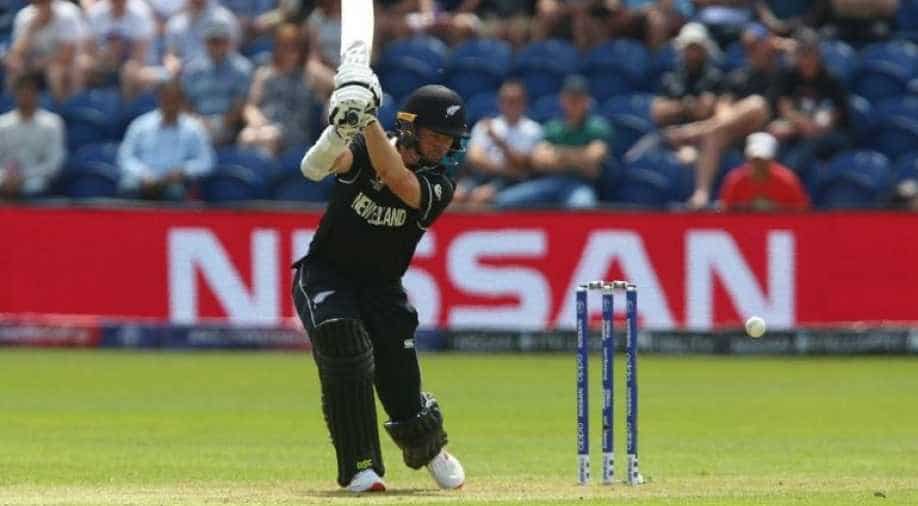 Kane Williamson-led New Zealand defeated Sri Lanka by 10 wickets to open their World Cup campaign on a winning note at the Cardiff's Sophia Gardens on Saturday.

The openers Martin Guptill and Colin Munro completed their half-centuries to inspire the team towards victory.

Kiwis chased down the 137-run target in 16.1 overs as earlier, New Zealand fast bowlers produced a clinical display to dismiss Sri Lanka for a paltry 136.

Kiwis skipper Kane Williamson won the toss and chose to bowl on a pitch so green that it was indistinguishable from the outfield, and he was rewarded when Matt Henry trapped Lankan opener Lahiru Thirimanne leg-before in the first over.

Canterbury seamer Henry, who conceded 107 runs in the warm-up match against West Indies earlier this week, continued his resurgence to remove Kusal Perera and Kusal Mendis in the ninth over to leave the Sri Lankan middle order exposed at 46-3.

Fast bowler Lockie Ferguson joined the party with two wickets in his first three overs, while Colin de Grandhomme claimed the prized wicket of the experience Angelo Mathews for a duck.

Captain Dimuth Karunaratne led the Sri Lankan recovery, carrying his bat through the innings with an unbeaten 52 to take the total past 100. But apart from all-rounder Thisara Perera (27), he received no support from the lower order as they were skittled out with 20.4 overs to spare.

Henry and Ferguson, who returned to remove Lasith Malinga to wrap up the innings, finished with three wickets apiece as Lanka finished with the lowest ODI total at Sophia Gardens - below their own record of 138 against the Kiwis in the 2013 Champions Trophy.

New Zealand are just 17 runs away from victory.

Sri Lanka are clue-less on how to stop Guptill and Munro.

Colin Munro inching towards a half-century, batting on 35 off 28 balls.

Openers Martin Guptill and Colin Munro are still at the crease.

Martin Guptill and Colin Munro are at the crease and veteran Lasith Mlainga will open bowling attack.

Trent Boult to Lakmal, catch out by Santner.

With this wicket, comes Boult's first wicket of the World Cup.

A good bouncer that Lakmal failed to judge.

Neesham to Udana, catch out by Matt Henry.

He departs without scoring a run.

Next batsman is Suranga Lakmal.

Santner to Perera, catch out by Trent Boult.

Skipper Dimuth Karunaratne is leading from the front.

Ferguson to Mendis, catch out by Jimmy Neesham after scoring just 1 run.

Next batsman is Thisara Perera.

Next batsman is the experienced Jeevan Mendis.

Half of the Sri Lankan team is back to the pavilion.

He gets Kusal Perera and Kusal Mendis in quick succession and left Sri Lanka reeling.

In the same over, Henry strikes again and sends Kusal Mendis back to the pavilion.

Henry to Mendis, Guptill takes a brilliant catch in the slips.

Mendis departs on a golden duck.

Next batsman is Dhananjaya de Silva.

Henry to Kusal Perera, catch out.

It's just the first over and Sri Lanka have lost their first wicket.

Thirimanne lbw out and departs after scoring 4 runs off 2 balls.

Next batsman is Kusal Perera.

Lahiru Thirimanne and Dimuth Karunaratne are at the crease.

For New Zealand, Matt Henry will open the bowling attack.

It's time for the national anthems and both the teams have arrived on the field.

New Zealand won the toss and opted to field first.

Chances of rain are negligible and there will be sunny intervals throughout the day. Unlike the previous two matches, a full 100-over game with lots of runs can be expected.

And teams batting first scored well in excess of 300 in the two completed warm-up matches at Cardiff.

New Zealand skipper Kane Williamson has called on his players to be adaptable, forecasting a return to the "scrappy" one-day cricket of the past amid the talk about the 500-mark being breached in the World Cup.

There have been plenty of pre-tournament chat about hitting the 500-mark, but Williamson thought otherwise on the eve of their tournament opener.

"There has been a lot of talk about really high scores but I think there will be a number of games where that isn't the case and it will require adjustment," Williamson said at the pre-match press conference.

"For us at the last World Cup, there was a trend in how we played. It was about being smart with the crop that we had to try and get the best performance.

"That meant we were aggressive, the ball swung and we looked to use that."

Their approach has changed in the last four years with the retirement of the big-hitting Brendon McCullum.

Which captain are you backing today?

Both the teams have played a total of 98 ODI matches. New Zealand won 48 on the other hand, Sri Lanka emerged victorious in 41 matches.

One tied and eight ended without any result.

It is a bit of a coincidence that New Zealand are again opening their World Cup campaign against Sri Lanka the way they did in the previous edition of World Cup.

New Zealand are happy to go under the radar as they prepare to launch their campaign for World Cup glory against Sri Lanka.

Black Caps reached the final four years ago for the first time after six semi-final defeats, only to be soundly beaten by Australia in Melbourne.

Kane Williamson has replaced the swashbuckling Brendon McCullum as captain but the core of the team that came so close in 2015 remains.

Since the last World Cup, New Zealand have risen as high as second in the world rankings but have also been beaten at home by South Africa, England and India.

New Zealand beat fancied India in their opening World Cup warm-up game before going down to the West Indies.

The Kiwis start clear favourites in their opener against 1996 winners Sri Lanka, a side that has slumped to ninth in the ODI rankings.

Newly appointed captain Dimuth Karunaratne, who has returned to the ODI fold after four years away, has been handed the responsibility of lifting a team that have lost eight of their past nine ODIs.

But Sri Lanka have an impressive World Cup record, with one title, two runners-up finishes and one semi-final appearance.

Hello! And welcome to the Match 3 of the Cricket World Cup 2019 which is between New Zealand and Sri Lanka at Sophia Gardens, Cardiff.