As it happened | ENGvSL: Sri Lanka defeat England by 20 runs 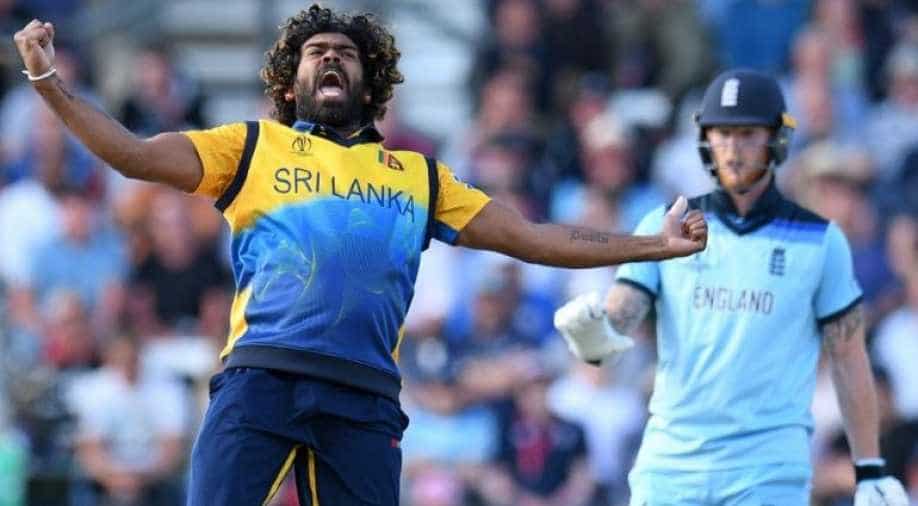 Biggest upset so far...and it's done and dusted.

Malinga dismissed dangermen Jos Buttler and Joe Root among his victims in a devastating spell that ruined England's bid to chase down Sri Lanka's modest total of 232-9.

Sri Lanka were also indebted to an unbeaten 85 from Angelo Mathews as they won for just the second time in six games.

Tournament favourites England, bowled out for 212, have now lost two of their six group matches.

A good over for England.

2 big sixes on the first two balls of the over.

Malinga's last over of this match and what a spell it has been!

This is his second best bowling figure in World Cup history (it's his 4th World Cup).

Splendid over by Isuru Udana.

Jofra Archer out after scoring 3 runs.

Isuru Udana to Archer, caught out by Thisara Perera.

Next batsman is Mark Wood.

Malinga is back into attack.

2 singles from this over.

Isuru Udana is back into attack.

Brilliant...brilliant over for Sri Lanka here at this moment.

Dhananjaya de Silva has done just enough to bring Lankans back into this game despite posting a achievable target.

2 wickets and gave 2 runs in this over.

Dhananjaya de Silva strikes again and has changed the course of the game...

Next batsman is Adil Rashid.

Nuwan Pradeep comes back into attack.

5 runs in this over.

A boundary on the 2nd ball of the over.

A good over by Dhananjaya de Silva.

7 runs in this over and he took a crucial wicket.

He departs after scoring 16 runs.

5 runs from Kusal Perera's 8th over.

Just 3 runs from this one.

Sri Lanka have fought brilliantly to defend a modest total.

3 runs from Malinga's 8th over.

Just a boundary on the second ball of this over.

A good over by Malinga.

Jos Buttler out after scoring 10 runs.

Malinga to Buttler, lbw out.

Next batsman is Moeen Ali.

Thisara Perera comes back into attack.

9 runs from this over.

1 boundary on the last ball of this over.

Malinga comes back into attack.

A good over here.

Malinga to Root, caught behind by wicket-keeper Kusal Perera.

The original decision was not out but Perera convinced the captain to review and it was worth it.

A small spike on the ultra edge signalls Root departure.

A slightly better over by Jeevan Mendis.

5 runs from Nuwan Predeep's 8th over.

A good over for England here... 14 runs from this over.

2 massive sixes on the 1st and 4th ball of the over.

Nuwan Pradeep is back into attack!

1 boundary on the 4th ball of this over.

Fifty up for Joe Root!

3 runs from this one.

Good to see Sri Lanka making a fight out of a 230 game. Still think a 260-270 game is the best ODI. The bowlers should have a chance and the best batsmen should find a way to get there.

1 boundary on the 4th ball of the over from the bat of Ben Stokes.

Dhananjaya de Silva is back into attack.

Next batsman is Eoin Morgan.

Malinga strikes to give Sri Lanka a perfect start.

James Vince and Jonny Bairstow are at the crease to start the run chase.

Malinga to bowl the first over.

Mathews starred in two crucial partnerships, adding 71 and 57 runs with Kusal Mendis (46) and Dhananjaya de Silva (29) for the fourth and sixth wickets, respectively, as Sri Lanka recovered from a disastrous start.

Mathews had five hits to the fence and a six in his innings.
Avishka Fernando, too, contributed to the team score with a 39-ball 49.

Electing to bat, Sri Lanka were reduced to 3 for 2 in 2.2 overs after Archer and Woakes struck early, removing Dimuth Karunaratne (1) and Kusal Perera (2) in three balls.

Fernando then blasted six fours and two sixes, sharing some valuable runs with Mendis. But an uppercut gone wrong saw Sri Lanka lose Avishka Fernando (49) and slip to 62 for three in 12.5 overs.

Mathews joined Mendis and brought up the team hundred in 23.2 overs.

However, leg-spinner Rashid struck twice, removing Mendis and new man Jeevan Mendis (0), as Sri Lanka slumped to 133 for five in the 30th over.

Mathews and Dhananjaya then resurrected Sri Lanka and took the team close to the 200-mark.

Once Dhananjaya was removed by Archer in the 44th over, it was a lonely battle for Mathews.

Mark Wood sends Lasith Malinga back to the pavilion.

Next batsman is Nuwan Pradeep.

Mark Wood to Udana, caught out by Joe Root.

Next batsman is Lasith Malinga.

Perera scored 2 runs before losing is wicket as Adil Rashid grabs the catch.

Joe Root takes a brilliant catch at the mid-on to dismiss Silva.

Next batsman is Thisara Perera.

Just on the next ball, Adil Rashid strikes again to get Mendis' wicket.

Next batsman is Dhananjaya de Silva and Adil Rashid is on a hat-trick.

Adil Rashid gets the breakthrough as Eoin Morgan grabs a catch to break the Mendis-Mathews partnership.

Next batsman is Jeevan Mendis.

Sri Lanka have a great support here in Leeds.

Avishka Fernando departs after playing a beautiful knock in a pressure situation.

He scored 49 runs before losing his wicket to Mark Wood.

Avishka Fernando has started in some style.

Avishka Fernando has impressed the spectators with his blistering knock so far.

Avishka Fernando has played some big shots to release some of the pressure.

Another wicket as Kusal Perera out.

Chris Woakes to Perera, catch out by Moeen Ali at third man.

Next batsman is Avishka Fernando.

Dimuth Karunaratne and Kusal Perera are at the crease to open Sri Lanka's innings.

Both the teams are out to sing their national anthem.

The game will start in 10 minutes.

Did you know, Leeds is the third largest city in Britain and sits in the heart of the UK – equal distance from London & Edinburgh. 🏙️ pic.twitter.com/vgjz7DSLla

Stay connected to get all updates related to the match.

This is the first match to be played at Headingley, Leeds of Cricket World Cup 2019.

The chances of rain are very less as Leeds is expected to wake up to a sunny day with some clouds hanging overhead.

Both the teams stand neck-to-neck when it comes to ODI head-to-head records.

Sri Lanka face a tough battle for survival when they lock horns with a dominant England.

With just one win, Sri Lanka are currently at the sixth spot with four points and will have to win rest of their four matches to salvage hopes of a semi-final berth.

England are placed comfortably at the second spot with four wins from five games, the only blemish being their loss to Pakistan.

Eoin Morgan and his men have emerged as the best batting side this World Cup as they have blown away their opponents, amassing 300 plus scores in four of the five games -- two of them being 386/6 against Bangladesh and 397/6 against Afghanistan.

In fact, five English batsmen are among the 10 highest-scoring batsmen this World Cup and the team boasts of five hundreds out of the 12 World Cup centuries so far.

Though England missed the services of opener Jason Roy due to an injury, Morgan's brutal 148 which was studded with a record 17 sixes helped them put 397-6 against Afghanistan, with Joe Root playing the second fiddle.

To stop this brute force called England, Sri Lanka will have to play out of their skins with the onus resting on the pace duo of Lasith Malinga and Nuwan Pradeep.

In batting, Sri Lanka too have to address their vulnerability in the middle order which saw them collapse in every match so far.

While against New Zealand, Sri Lanka lost five wickets for 14 runs to be bundled out for 136, they were dismissed for 201 in 36.5 overs by Afghanistan after losing seven wickets for 36 runs.

In their last match against Australia, Sri Lanka slipped from 205 for 3 to be all out for 247 and the Dimuth Karunaratne-led side will have to come up with an extraordinary batting effort to counter the likes of Jofra Archer and Mark Wood, who have 12 and 9 wickets so far respectively.

Hello! And welcome to the Match 27 of the Cricket World Cup 2019 which is between England and Sri Lanka in Leeds.