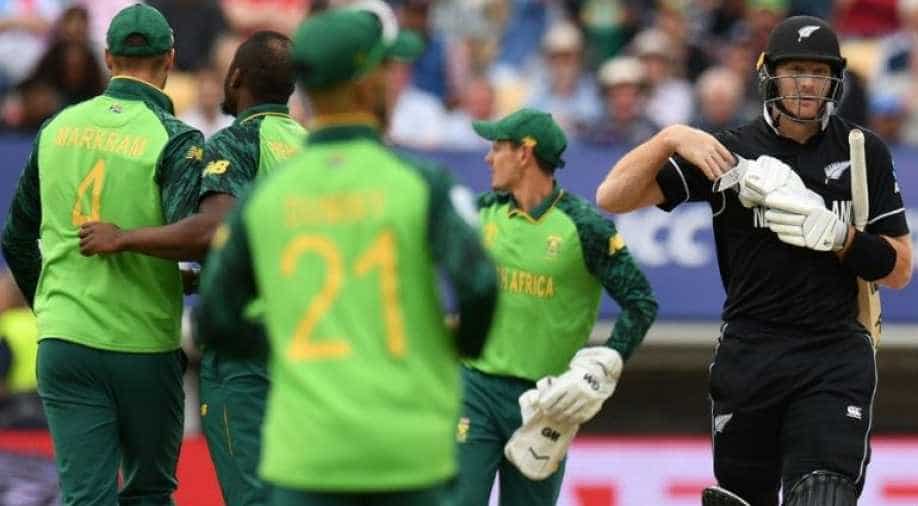 New Zealand's Martin Guptill walks back to the pavilion after losing his wicket. Photograph: AFP

New Zealand's Kane Williamson played a captain's knock as he smashed brilliant century to inspire the team towards victory.

After electing to bowl first, New Zealand restricted South Africa to a modest total of 241-6 in their rain-delayed World Cup match.

The toss was delayed due to a wet outfield that led to a game that was reduced to 49 overs a side.

South Africa's batsmen, barring Hashim Amla and Rassie van der Dussen, failed to build on their starts in the face of a disciplined bowling effort from the Kiwis.

South Africa had hope while Amla was at the crease but that too faded after he was bowled for 55 by Mitchell Santner in the 28th over but Van der Dussen's unbeaten 67 gave them a respectable total.

Kiwi pacer Lockie Ferguson was the pick of the bowlers, picking up three wickets, while all-rounder Colin de Grandhomme contributed with an economical spell of 1-33 in his 10 overs.

Almost a brilliant over by Ngidi. He took an important wicket but the last-ball boundary was just not in favour of NZ.

However, it showed Kiwi's class.

8 runs needed off last over.

Colin de Grandhomme out...It is the twist in the tale?

Will see that, but for now, Grandhomme departs after scoring 60 runs.

Ngidi gets the breakthrough as Faffy takes a crucial catch, it was not easy.

Next batsman is Mitchell Santner.

Rabada's last over of this match.

Lungi Ngidi is back.

Last over by Chris Morris.

A very expensive over by Phehlukwayo.

Faffy has called Chris Morris to bowl this over.

Phehlukwayo is back into attack.

Rabada from the other end.

Lungi Ngidi is back into the attack.

A good over for New Zealand here...

Rabada comes back into attack and gives 10 runs.

There was a wicket chance, as Williamson edged into de Kock's gloves...

Phehlukwayo has been expensive.

9 runs from this one.

Just look how much the wicket meant to Chris Morris!

6 runs from this one.

6 runs from this over, one boundary on the fifth ball of the over.

Another good over by Tahir, just 3 singles.

9 runs from here and a crucial wicket.

Chris Morris gets the breakthrough.

South Africa are not leaving any stone unturned.

Neesham scored 23 runs before gifting a catch to Hashim Amla.

Colin de Grandhomme is the next batsman.

A slight expensive over by Phehlukwayo.

Will these fans be celebrating come the end of this #CWC19 game?

Fans are enjoying the intriguing contest...

Very good over by Rabada.

Change of bowler from the other end also, Andile Phehlukwayo is back into attack.

Kagiso Rabada is back into attack.

and 4 runs from this over.

8 runs from the over.

1 beautiful boundary came on the first ball of the over.

Fifty up for Kane Williamson!

Another tight over by Ngidi.

4 runs in this over.

Another good over by Tahir.

No run in this over, a maiden by Lungi Ngidi.

Good over by Imran Tahir.

There was a massive lbw appeal also but South African skipper Faf du Plessis did not review it, a good decision as it was pitching outside.

Wicket-taking pacer Lungi Ngidi is back into the attack.

5 runs from the over.

The experienced spinner gave just 3 runs in this over.

8 runs from this over, 1 boundary and 4 singles.

South Africa have made it a tough contest.

Next batsman is James Neesham.

Chris Morris strikes to send Taylor back to the pavilion.

Next batsman is Tom Latham.

When was the last time it happened in a World Cup match?

Next batsman is Ross Taylor.

Colin Munro out after scoring 9 runs.

Kagiso Rabada gets the breakthrough and South Africa needed this wicket as they are defending a below par score.

Munro caught and bowled by Rabada.

Next batsman is Kane Williamson.

Martin Guptill and Colin Munro are at the crease to start the run chase against South Africa.

A tight bowling performance from New Zealand restricted South Africa to a modest total in their rain-delayed World Cup match.

Asked to bat first in a game that was reduced to 49 overs a side, South Africa's batsmen, barring Hashim Amla and Rassie van der Dussen, failed to build on their starts in the face of a disciplined bowling effort from the Kiwis.

South Africa had hope while Amla was at the crease but that too faded after he was bowled for 55 by Mitchell Santner in the 28th over but Van der Dussen's unbeaten 67 gave them a respectable total.

Kiwi pacer Lockie Ferguson was the pick of the bowlers, picking up three wickets, while all-rounder Colin de Grandhomme contributed with an economical spell of 1-33 in his 10 overs.

Phehlukwayo departs on a duck.

Next batsman is Chris Morris.

Trying to do the same, he lost his wicket to Lockie Ferguson and Trent Boult took his catch.

Next batsman is Andile Phehlukwayo.

Aiden Markram was looking to up the intent of the South Africa innings but perishes caught on the boundary off the bowling of Colin de Grandhomme!

South Africa 136/4 with just over 16 overs of their innings remaining.

New Zealand are flying high and a fourth win would lift the 2015 finalists to the top of the table ahead of matches against West Indies, Pakistan, Australia and hosts England.

Colin de Grandhomme strikes to send him back to the pavilion.

Next batsman is David Miller.

Trent Boult dropped an easy catch as Aiden Markram gets a lifeline here.

Hashim Amla out after scoring 55 runs.

It's great to have cricket at Edgbaston for the first time at #CWC19 today! pic.twitter.com/DkbAd7KOOr

Can he go on and celebrate with a big one today?#CWC19 pic.twitter.com/V1GvAkYrwZ

Next batsman is Aiden Markram.

Trent Boult to de Kock, bowled. The stumps are thrashed.

Next batsman is Faf du Plessis.

Quinton de Kock and Hashim Amla are at the crease and Matt Henry will launch New Zealand's bowling attack.

Both the teams are done with their national anthems.

The match will begin in two minutes.

The umpires have judged the outfield is too wet to begin.

There will be a further inspection at 11AM 🙏#CWC19

The umpires will inspect the pitch and outfield at 3:30pm IST.

Listen in what Shaun Pollock has to say...

The toss has been delayed due to a wet outfield.

South Africa gear up to keep their chances alive at the World Cup.

Light showers with heavy cloud cover is expected for the morning, but the conditions will get better as the day goes by with bright sunlight throughout rest of the day.

New Zealand have won five matches while the South African team has managed only two victories.

South Africa will be looking to avenge their 2015 semi-final defeat while New Zealand will aim to reclaim their position at the top when the two sides clash.

South Africa, who suffered a heartbreaking loss to New Zealand in the last edition, had a dismal start to their World Cup campaign, losing three straight games followed by a wash-out before registering their maiden win against bottom-placed Afghanistan.

In contrast, New Zealand are yet to face defeat in the tournament and are lying second on the table with three wins and a washout.

With Ngidi fully fit and the team finally tasting victory, skipper Faf du Plessis will breathe a sigh of relief.

"Hopefully this is a real confidence booster for everyone on the team. And there's a little bit of weight that you feel that's off your shoulders now. We need to win every game that we play" Du Plessis had said after the win against Afghanistan.

The Proteas have been mostly done in by their batting but they will take heart from the fact that openers Hashim Amla and Quinton de Kock finally clicked in the previous game.

The pair, alongside du Plessis, will have to navigate their way through a quality seam attack led by Trent Boult.

New Zealand have a solid batting unit. Skipper Kane Williamson anchored the side to victory against Bangladesh and Afghanistan while Ross Taylor has also been among the runs but the team will hope for openers Colin Munro and Martin Guptill to start clicking.

Hello! And welcome to the Match 25 of the Cricket World Cup 2019 which is between New Zealand and South Africa in Birmingham.