As it happened: WIvBAN: Bangladesh beat West Indies by 7 wickets 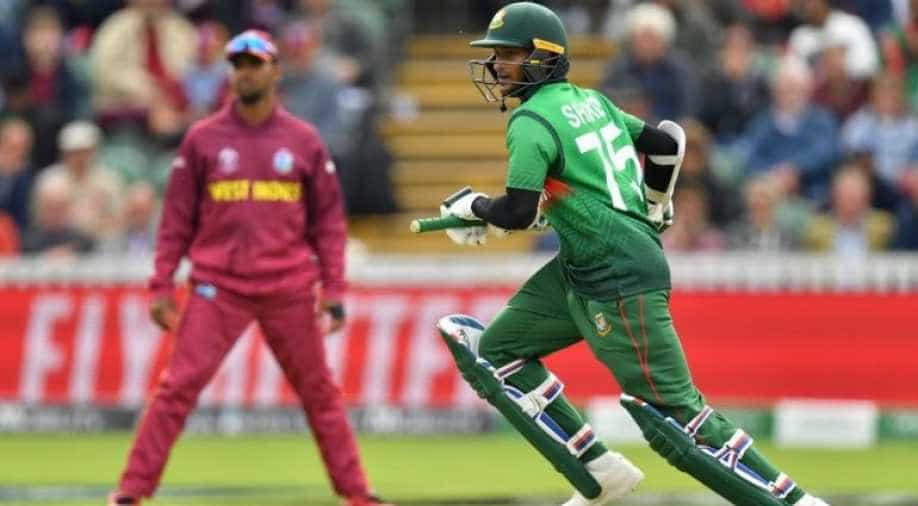 Win with a splendid boundary!

Bangladesh's joint highest one-day international run chase put them behind only Ireland's 329-7 against England in 2011 in the history of successful World Cup chases.

Mashrafe Mortaza's side remain in with a chance of reaching the semi-finals after their second win in five matches.

Jason Holder back into attack.

4 runs from Shannon Gabriel's 8th over.

Total 5 runs from this over.

Huge over for Bangladesh... 24 runs from this over.

5 runs from this one.

Fifty up for Liton Das!

What a partnership it has been!

Shakib Al Hasan completes his century. It's his 9th overall ton and second of this tournament.

Bowlers have no answers to Shakib and Liton's shots.

Sheldon Cottrell comes back into attack.

Chris Gayle is bowling from the other end.

He has been expensive.

West Indies are losing grip from the game.

He departs after scoring 1 run.

Thomas to Mushfiqur, caught behind.

Next batsman is Liton Das.

He's taken a sensational catch. Now, just as dramatic a run-out from Sheldon Cottrell! Good to see a fast bowler doing that.

Cricket analyst and presenter Harsha Bhogle is full of praises for Sheldon Cottrell.

Sheldon Cottrell gets the breakthrough.

Cottrell's brilliant throw on his own bowling to effect a run out to dismiss Tamim Iqbal.

Next batsman is Mushfiqur Rahim.

Andre Russell gets the breakthrough.

Russell to Sarkar, caught out by Chris Gayle.

The Bangladesh team is off to a stable start.

Shai Hope hit a patient 121-ball 91 while Shimron Hetmyer produced a quick-fire fifty as West Indies posted a challenging 321 for eight against Bangladesh.

Hope shared a 116-run partnership with Evin Lewis (70) for the second wicket before adding another 83 runs with Hetmyer (50 off 26 balls) after West Indies had a sedate start following Bangladesh's decision to field first.

The two-time champions seemed to be on course for a 350-plus score before Bangladesh tied things up a bit in the last five overs, which yielded just 33 for loss of one wicket.

Earlier, West Indies lost Chris Gayle (0) early and could manage only 32 runs in the first powerplay with the Bangladesh pacers bowling in tendum.

Lewis and Hope then brought up the team hundred in 22.4 overs. The left-handed opener then exploded, smashing successive fours off Shakib before sending one from the bowler out of the park in his next over.

But Shakib returned to dismiss Lewis, having him caught at long-off as West Indies slipped to 122 for two.

Hope then completed his fifty in 75 balls but new man Nicholas Pooran (25) could not stay longer as WI lost their third wicket in the 33rd over.

That brought Hetmyer to the crease and he took the Bangladesh bowlers to the cleaners, smashing four boundaries and three sixes in his 26-ball whirlwind innings.

Once Hetmyer was back to the hut, captain Jason Holder blasted 33 off 15 balls with the help of four hits to the fence and two sixes to keep the flow of runs but West Indies lost their way after he was dismissed in the 44th over.
Hope too holed out in the 47th over.

Shai Hope out, he missed his century by just 4 runs.

Mustafizur gets the breakthrough.

Mustafizur to Hope, caught out by Liton Das.

Next batsman is Oshane Thomas.

Shimron Hetmyer's innings was rather special.

6 runs from Saifuddin's 8th over.

Mehidy Hasan is bowling from the other end.

5 singles in this over.

Mohammad Saifuddin comes back into attack with a good over.

Holder tried to hit big but it went high up and Mahmudullah takes the catch on the long-off.

Next batsman is Darren Bravo.

Mashrafe Mortaza is back into attack.

Big over for Windies, 13 runs from this one.

Mustafizur's 7th over and he gives 7 rund from this one.

Shakib's 8th over and 11 runs from this one.

Brilliant over by Mustafizur.

He departs on a duck.

Next batsman is Jason Holder.

Mustafizur gets the breakthrough.

Mustafiz to Hetmyer, caught out by Tamim Iqbal.

Andre Russell is the next batsman.

After massive run flows, a good over by Mehidy Hasan.

6 runs from the over.

Mosaddek Hossain is back into attack.

Mehidy Hasan is back into attack.

Another huge over for Windies.

Expensive over by Saifuddin.

This is not acceptable, 19 runs from the over.

Mustafizur Rahman, who was back into attack, losing the plot.

There was a run out chance but the throw missed the stumps.

8 runs from this over.

1 wicket after giving 8 runs, not bad by Shakib.

Shakib strikes again to get one more wicket.

Shakib to Pooran, caught out by Soumya Sarkar.

Mohammad Saifuddin is back into attack.

Shakib's 6th over and he gives 5 runs.

9 runs from this over.

One massive six on the first ball of the over when Nicholas Pooran sent the ball straight onto the roof of the stand.

Shakib has changed his strategy it seems.

He was expensive at the start, then got a breakthrough and now he is back with his fine bowling.

9 runs from Mehidy Hasan's 5th over.

In this over only, Shai Hope completes his half-century.

Brilliant over by Shakib. Just one over. Now, Bangladesh are trying to build pressure on Windies batsmen.

7 runs from the over, including one boundary.

Shakib gets the breakthrough for Bangladesh.

He departs after scoring 70 runs.

Shakib to Lewis, caught out by Sabbir Rahman.

Nicholas Pooran is the next batsman.

Another good over by Mosaddek.

6 singles in this over.

An expensive over by Shakib.

Fifty up for Evin Lewis!

It's his 4th ODI half-century.

Mosaddek has become the central of Bangladesh's bowling plans. Especially in this game.

4 runs from this over.

Mosaddek is not letting batsmen to open their arms.

4 runs from his first spell.

Another brilliant over by Mosaddek.

Just 4 runs from this one.

Total 7 runs from this one.

One boundary on the last ball of the over as Evin Lewis' top edge goes straight down the leg-side.

Mosaddek Hossain comes into attack and gave just one run.

The batsmen are holding up which is needed for Windies.

On the other hand, Bangladesh need to break this partnership.

Another economical over by Mustafizur.

Yes, this can be dangerous!

8 runs from the over including one boundary.

A pleasant shot by Shai Hope when he struck a boundary through the covers.

Mustafizur Rahman is back into attack. Total 6 runs from the over.

5 runs from Mehidy Hasan's 3rd over.

There was one lbw appeal but on-field umpire denied it. Mortaza was discussing with the bowler but eventually did not review it.

8 runs from skipper's 7th over including 1 beautiful boundary by Evin Lewis.

A good over by Mehidy Hasan.

3 runs from the over.

Mashrafe Mortaza is going on with his tight and skiddy bowling.

Total 10 runs from the over.

Chris Gayle departs for a 13-ball duck! An excellent start with the ball for Bangladesh – Saifuddin with the breakthrough. #WIvBAN | #CWC19 pic.twitter.com/1jvLWvi0AY

Well, that's how you celebrate after taking Gayle's wicket.

Mohammad Saifuddin gets the first breakthrough and Windies lose a crucial wicket.

Chris Gayle out on a duck.

Saifuddin to Gayle, caught behind.

Next batsman is Shai Hope.

Chris Gayle and Evin Lewis are at the crease to start Windies' innings.

Both the teams are out on the field to sing their national anthems.

The match will start in 10 minutes.

Bangladesh made one change, bringing in Liton Das in place of Mohammad Mithun.

For West Indies, Carlos Brathwaite made way for Darren Bravo in the playing XI.

"If you want to put us in the underdog category, fair enough," Holder told a news conference on Sunday.

"We've played them quite a bit in the past and they've got the better of us, but it's a different occasion and there's lots at stake, so we're all up for it.

"It's a challenge against Bangladesh, so we just want to get over them and move forward."

"It's a very important match for us, especially losing few points in the last three matches," Mashrafe said.

"I think our bowling has been fantastic against them in the last two-three series we played.

"Obviously the top five West Indies batsmen are left-handers, and Mehidy bowled against them really well too."

Both the teams are eager to return to winning ways.

It's a bright sunny day in Taunton with partly cloudy intervals.

Sun will out, boundaries are short, a high-scoring match could be expected.

Bangladesh and West Indies have played each other nine times since the 2015 World Cup, and the Asian side has emerged victorious in seven occasions, including three wins in the tri-nation tournament held in Ireland last month.

Bangladesh will have the psychological advantage when they face West Indies though both teams are sailing in the same boat as far as their World Cup campaign is concerned.

Bangladesh beat West Indies as many as three times in tri-series that Ireland hosted ahead of the World Cup.

Even though West Indies stars such as Chris Gayle and Andre Russell were not part of that series, Jason Holder's team still must be smarting from those three consecutive losses last month.

Both teams are on three points from four games, having lost two games with one game each being a washout.

Bangladesh, who last played on June 8 when they lost to England, will be itching to take the field after a forced break of one week with the game against Sri Lanka called off due to rain.

They had the opportunity to score two points against a struggling Sri Lanka before the weather sealed their fate.

The Mashrafe Mortaza-led side has batted pretty well so far but needs to step up in the bowling department. The bowlers conceded as many as 386 runs against England in

Cardiff and it was too much of an ask for the batsmen who ended at 280.

West Indies, on the other hand, need to change their approach in batting. Most of their batsmen seem to be in T20 mode while playing 50-over cricket.

Hello! And welcome to the Match 23 of the Cricket World Cup 2019 which is between West Indies and Bangladesh in Taunton.