As it happened | SLvAUS: Australia beat Sri Lanka by 87 runs 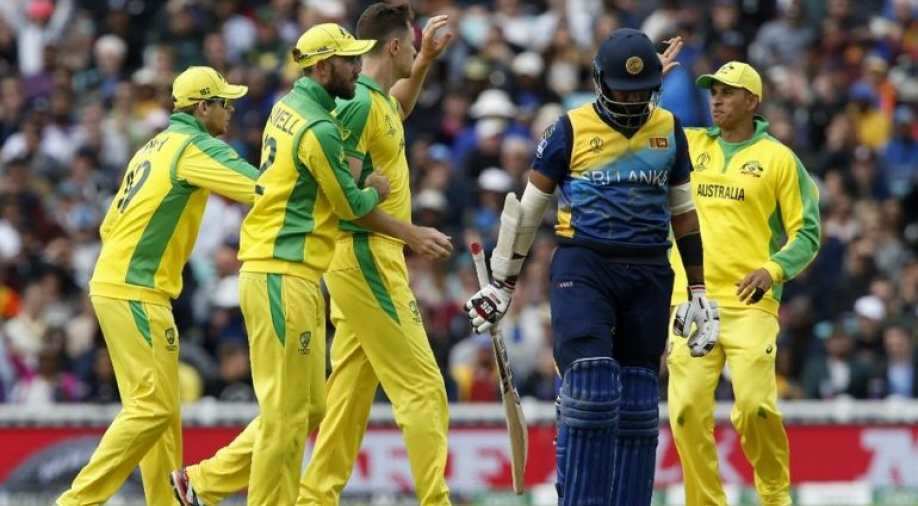 Australia beat Sri Lanka by 87 runs at the Oval on Saturday to move to the top of the World Cup table with four wins from five matches.

Captain Aaron Finch scored 153 in Australia's imposing total of 334 for seven and despite a good start, Sri Lanka were bowled out for 247, with paceman Mitchell Starc taking four wickets.

Australia win the match by 87 runs.

Kane Richardson comes back into attack.

He gives 6 runs from this over.

1 boundary and 1 single and 1 was extra.

2 runs from the over.

Pat Cummins has been good with his line and length.

Certainly, no fifer for Starc this time.

A wicket maiden by Richardson.

Lasith Malinga out, it was a soft dismissal as he gives an easy catch to Usman Khawaja standing at the covers.

Kane Richardson gets the wicket.

Next batsman is Nuwan Pradeep.

A good over by Starc.

It's his 9th over and he gives just one run.

He gives a total 7 runs.

Kane Richardson sends Isuru Udana back to the pavilion.

next batsman is Lasith Malinga.

Another good over by Starc.

He was caught behind.

5 runs from Jason Behrendorff's 9th over.

A much-needed over by Starc.

9 runs and 2 wickets from this over.

Starc strikes again in the same over to get one more wicket.

Next batsman is Dhananjaya de Silva.

Pat Cummins to Mathews, caught behind.

Next batsman is Milinda Siriwardana.

Maxwell last over, he gives 3 runs from this over.

A good over by Kane Richardson, total 4 runs including 1 wicket.

Kane Richardson to Karunaratne, caught out by Maxwell.

Total 8 runs from the over.

2 runs from the over.

Lahiru Thirimanne out after scoring 16 runs.

Australia finally get the breakthrough.

Next batsman is Lahiru Thirimanne.

Sri Lanka have got the necessary start they needed in this massive run chase.

Aaron Finch's brilliant 153 lifted Australia to an imposing total of 334 for seven in their Cricket World Cup match against Sri Lanka.

Captain Finch flayed the Sri Lanka attack all around the ground as the defending champions accelerated smoothly in the second half of their innings to set up a strong position from which to secure their fourth win of the tournament.

After Sri Lanka had won the toss, Finch and David Warner shared a solid opening partnership of 80 before Warner, on 26, was bowled by spinner Dhananjaya de Silva as he tried to cut a straight ball.

Australia end their innings on 334/7!

Skipper Aaron Finch was their star with the bat, scoring 153 – the equal highest individual score of #CWC19 so far. pic.twitter.com/ws0yiAv6l6

Usman Khawaja was caught low down at square leg by Isuru Udana off De Silva for 10, bringing former captain Steve Smith to the crease.

Finch launched De Silva for successive sixes and the right-hander lifted Milinda Siriwardana for another maximum to reach three figures off 97 deliveries.

Finch moved past 150 and must have had his sights on a double century when he skied Udana to extra cover to end a stand of 173 after hitting five sixes and 15 fours.

Smith was bowled by Lasith Malinga for 73 as Australia's momentum stalled briefly but despite a flurry of late wickets, Glenn Maxwell's quickfire unbeaten 46 ensured his team posted a very competitive total.

Sri Lanka, whose last two matches were washed out, have struggled with the bat recently and will have to show a big improvement to pull off the highest successful World Cup run chase and notch up their second victory of the tournament.

Another wicket as Pat Cummins out.

Just like Alex Carey's wicket, Udana sends Pat Cummins back to the pavilion, just that it was striker's end this time.

Udana to Cummins, run out.

A brilliant run out by Isuru Udana.

Udana to Maxwell and Carey run out.

Shaun Marsh out after scoring 3 runs.

An inch-perfect yorker by Lasith Malinga sends back Steve Smith back to the pavilion.

Next batsman is Shaun Marsh.

Aaron Finch out after scoring 153 runs.

Isuru Udana gets the breakthrough.

This partnership is getting away from Sri Lanka.

This partnership between Smith and Finch is probably taking the game away from Sri Lanka.

It's his 14th One-Day International hundred.

De Silva to Khawaja, caught out by Isuru Udana.

Fifty up for Aaron Finch

It's his 3rd half-century of this World Cup.

Sri Lanka needed a breakthrough and they got one.

It's time for Drinks Break!

Sri Lankan bowlers have clearly failed to take advantage of the conditions.

They need to take wickets here. 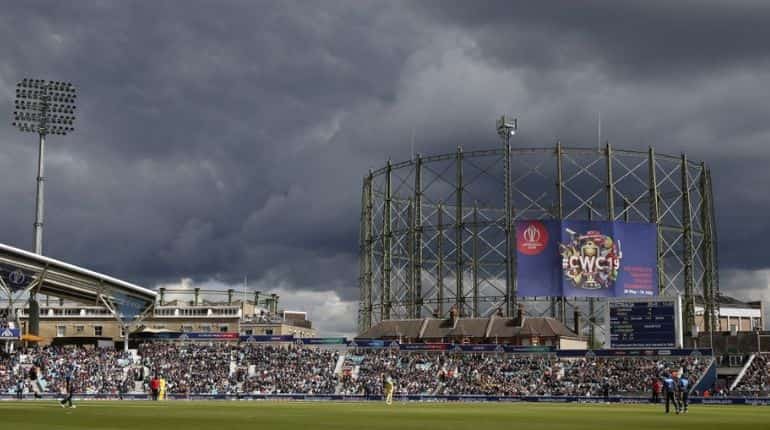 Dark clouds are seen at The Oval.

The opening batsmen have given a stable start to the team.

Both the Australian openers, David Warner and Aaron Finch, are at the crease.

Both the teams are out on the field to sing their national anthem.

The match will start in five minutes.

"It has been rainy, so the moisture will help seamers initially so we need to take advantage."

"We haven't done too well particularly with the bat. We have done well in patches in the tournament, but it hasn't come together for us. We need to be disciplined against the new ball."

Sri Lanka win the toss and opt to bowl first against Australia.

Clouds will make appearances every now and then but overall, it will be a bright and sunny day.

Light rains can be expected too.

Did you know, London is officially the greenest city of its size in the world. Hyde Park alone covers 350 acres right in the heart of the city! 🍃#SLvAUS pic.twitter.com/rQc9tG6g0Z

Today is the last game of Cricket World Cup 2019 at this venue.

India ODI format, both the teams have played a total of 96 matches. Australia won 60 and Sri Lanla 32.

After two washed out games, Sri Lanka will be desperate to come out all guns blazing but defending champion Australia's depth will be hard to beat.

Sri Lanka have not played a match at the World Cup since June 4, forced to split points with Bangladesh and Pakistan following two washed out games.

Australia, on the other hand, have been simply unstoppable with their loss against India being the only blemish in an otherwise professional performance so far in the tournament.

With two fifties and a hundred, David Warner has been simply outstanding, helping Australia post 300-plus scores in the last two matches.

Skipper Aaron Finch too has two fifties to show in the last four innings.

However, Australia have looked vulnerable against quality pace bowling -- they were reduced to 79 for five by West Indies.

Their middle order is brittle and squandered superb starts against Pakistan and India. Sri Lanka will look to exploit these weaknesses on Saturday.

Sri Lanka will hope that fast bowler Nuwan Pradeep, who had injured himself ahead of the Bristol game, returns Saturday to strengthen the bowling attack.

Veteran pacer Lasith Malinga is also likely to play Saturday and the onus would be on the pace duo to get wickets.

In the batting department, the Dimuth Karunaratne-led side has failed to last the full 50 overs against New Zealand and Afghanistan.

The former champions will have to address their batting woes before they take on the likes of Mitchell Starc and Pat Cummins, both of whom have taken nine wickets each so far.

Hello! And welcome to the Match 20 of the Cricket World Cup 2019 which is between Sri Lanka vs Australia at The Oval.