As it happened | INDvAUS: India beat Australia by 36 runs 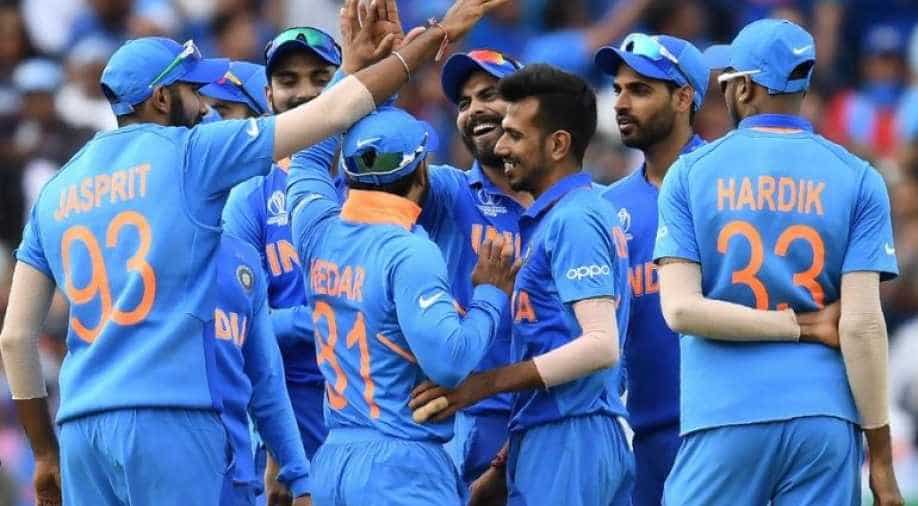 Virat Kohli-led India defeated the defending champions Australia by 36 runs in the Match 14 of Cricket World Cup 2019 on Sunday at London's Kennington Oval.

Indian skipper Virat Kohli opted to bat first after winning the toss and took the full advantage of the conditions.

Opener Shikhar Dhawan smashed his 17th century in one-day internationals as India's top order fired in unison to power them to 352 for five wickets.

Australian team failed to chase down the target as they were all out 316-all out.

Dhawan added 127 runs with fellow opener Rohit Sharma (57) and 93 with skipper Virat Kohli to lay the foundation for a big total before departing for 117 at the Oval.

Kohli made a typically breezy 82 and Hardik Pandya, dropped behind the wicket on the very first ball he faced, smashed 48 off 27 balls to justify his promotion in the batting order.

Marcus Stoinis claimed 2-62 for Australia who had beaten Afghanistan and West Indies in their first two matches.

Next batsman is Adam Zampa.

3 runs from the over.

9 runs from the over and one wicket also.

Pat Cummins was trying to hit a big shot but lost his wicket as he edged it.

And Dhoni, making no mistake, took the catch.

Next batsman is Mitchell Starc.

One boundary and 33 singles.

Bumrah is back into attack.

He gave 6 runs and took a wicket also.

Hardik's last over of his spell.

Jasprit Bumrah comes back into attack.

India are dominating the game.

He walks back after scoring 28 runs.

Next batsman is Nathan Coulter-Nile, who had played a match winning knock in Australia's previous game.

3 runs from the over including 2 wickets.

Can Maxwell do the magic from here?

Another wicket... Marcus Stoinis departs on a duck.

A massive wicket here goes in Bhuvi's account as he sends back Steve Smith back to the pavilion.

Next batsman is Marcus Stoinis.

6 runs from the over including one crucial wicket of Usman Khawaja.

Khawaja scored 42 runs after losing his wicket to Jasprit Bumrah.

An expensive over from Kuldeep Yadav.

Total 14 runs from the over.

Hardik Pandya comes back into attack.

8 runs from the over, 1 boundary and 4 singles.

6 runs from the over. One boundary and 2 singles.

Chahal's seventh over of his spell.

4 runs from the over.

At the halfway stage Australia require 219 runs to win from 150 balls.

David Warner out after scoring 56 runs.

Chahal to Warner, caught out by Bhuvi.

There are overcast situation at the Oval.

Aaron Finch out after scoring 36 runs.

Hardik to Warner, Finch run out.

Wrong decision to take another run.

The first powerplay is over and Australia have dominated it to some extent as they scored runs and managed to save wickets.

David Warner and Aaron Finch are at the crease to start the run-chase.

Shikhar Dhawan and Virat Kohli played knocks of 117 and 82 respectively, allowing India to post a challenging score of 352 runs for the loss of five wickets.

After opting to bat first, openers Shikhar Dhawan and Rohit Sharma provided a steady start to the Men in Blue as the duo put up a stand of 127-runs, which saw both Sharma and Dhawan bringing up their respective fifties before the 22nd over.

In this match, Sharma became the fastest Indian batsman to score 2000 runs against Australia. Previously the record was held by Indian batsman Sachin Tendulkar.

Nathan Coulter-Nile finally took his first wicket in this World Cup as he dismissed Sharma (57) in the 23rd over. Coulter-Nile bowled a slower delivery, Sharma tried to upper cut it, but he just managed to lob a simple catch to the wicket-keeper Alex Carrey.

After reaching his half-century, Dhawan changed the tempo of his innings and he started looking for some big shots. Virat Kohli came out to bat next, and he along with Dhawan did not let go off the momentum. The duo stitched together a partnership of 93 runs, which saw Dhawan bringing up his century from just 95 balls in the 33rd over.

In search of some quick runs, Dhawan`s (117) wicket perished as he was dismissed by Mitchell Starc in the 37th over. Hardik Pandya got a reprieve on his very first ball as he was dropped by wicket-keeper Alex Carrey.

Pandya and Kohli hammered the Aussie bowlers for boundaries in the death overs. Pandya played a knock of 48 runs from 26 balls, but he was sent back to the pavilion by Pat Cummins, ending the 81-run stand between Pandya and Indian skipper Kohli.

MS Dhoni who has been surrounded by the controversy of late regarding his army insignia on his wicket-keeping gloves came out to bat next, and he played a cameo of 27 runs off just 14 balls, but he was sent back to the pavilion in the final over as Marcus Stoinis took a stunning catch. Kohli (82) also departed in the final over, but India posted a challenging total of 352 runs on the board.

In the same over, Marcus Stoinis strikes again and gets Virat Kohli's wicket.

Next batsman is Kedar Jadhav. One ball left, KL Rahul is on strike.

MS Dhoni out after scoring 27 runs.

Stoinis to Dhoni, caught to bowled.

Next batsman is KL Rahul.

Pat Cummins to Pandya, caught out by Aaron Finch.

Shikhar Dhawan out after scoring 117 runs.

Mitchell Starc to Dhawan, caught out by Nathan Coulter-Nile.

India have crossed the 200-run mark.

It's his third World Cup hundred.

A third World Cup hundred for Shikhar Dhawan and what an innings it has been from the Indian opener today!#INDvAUS #CWC19 #TeamIndia pic.twitter.com/6Qzbm4PRcO

What an innings it has been so far from Dhawan!

Rohit Sharma out, Nathan Coulter-Nile gets the breakthrough.

Coulter-Nile to Rohit, caught out by the wicketkeeper Alex Carey.

Next batsman is Virat Kohli.

First powerplay is over. It was equally balanced by both the teams.

India managed to save wickets but the run rate was below par.

A chance was created for Australia but Nathan Coulter-Nile just missed the catch. Rohit Sharma gets a lifeline here...

Done with the national anthems, India's Rohit Sharma and Shikhar Dhawan have arrived on the crease.

India won toss and the skipper Virat Kohli has elected to bat first against Australia.

Australia captain Aaron Finch has hailed Steve Smith as the world's best batsman, saying having him and David Warner back in the fold is a huge boost for the team.

Smith and Warner played their first official international matches at the World Cup in England and Wales after serving year-long ball-tampering bans.

Smith made a gritty 73 in Australia's win over West Indies after Warner smashed an unbeaten 89 not out in his team's opening win against Afghanistan.

"Well, when you've got world-class players coming back into your side, it's unfortunate for the guys who have missed out and the guys that have played some really good one-day cricket in the past," Finch said.

"Steve is the best batter in the world in my opinion over all three forms of the game," he said.

"I think that when you have David who's so destructive at the top of the order, his record shows how destructive he is.

"To have them to come back, yes, it's great for the side and our batting line-up and for experience in World Cups and a great help for me as a leader, as well, in terms of tactics and stuff out on the field," Finch added.

Ahead of match, Rohit Sharma said:

Rohit Sharma is seeking to curb his natural strokeplay and bat for longer to help India's World Cup campaign.

"Experience teaches you a lot of things, and that is something that has come into my game of late, the past few years rather.

"You want to make sure that you start the innings and you finish off the innings as well. That gives you immense pleasure."

Will #ViratKohli light up the #CWC19 on 🔥 today? 🤔 #TeamIndia pic.twitter.com/DB3uvPuR8K

What a contest this is going to be.

Sunday's #CWC19 action will see India take on Australia at The Oval. Which side will continue their unbeaten start to the tournament?#TeamIndia #CmonAussie pic.twitter.com/abnInkgOmn

Glenn Maxwell is a big favourite with his team-mates. Can he crush India in #CWC19 today?#CmonAussie pic.twitter.com/ROpppbmKVN

Both the teams will surely look to build up towards an exciting contest in this World Cup.

It's a fine day with sunny spells throughout but a few isolated showers might be expected in the afternoon.

Dryness, and large square boundaries might well bring the spinners into play.

In the past five World Cup tournaments, India are the only team to have denied the Australians the trophy, which was in 2011 when India were the champions.

India's quest for glory will face a stern test in formidable Australia, forcing Virat Kohli and Ravi Shastri to put their thinking caps on and contemplate a tactical rejig, as one of World Cup's most storied rivalries resumes.

India were clinical in their six-wicket victory against a depleted South Africa while Australia, who have raised their game in the last couple of months, were professional against Afghanistan and brilliant in their come-from-behind victory against the West Indies.

Having struggled in the past one year after suspensions of Steve Smith and David Warner, Australia finally seemed to have picked their pieces and are playing exactly like a five-time champions ought to.

This will certainly be a cause of worry for India, who lost their ODI series at home during the last bilateral encounter and are still in search of a perfect combination both in batting and bowling.

In fact, Australia's batting coach Ricky Ponting is apprehending a shift in strategy from the Indians, who have of late rattled them with quality pace bowling.

Hello! And welcome to the Match 14 of the Cricket World Cup 2019 which is between India and Australia at London's Kennington Oval.