As it happened | ENGvBAN: England beat Bangladesh by 106 runs 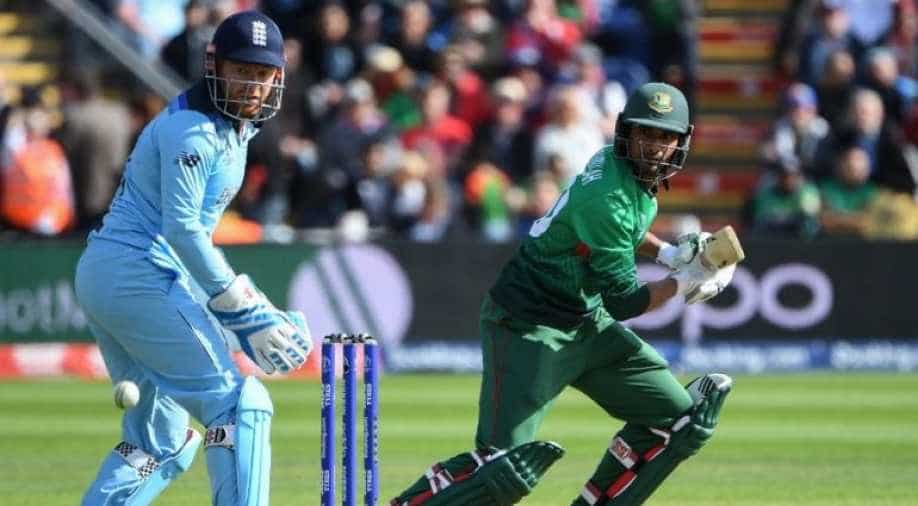 England defeated Bangladesh in the Match 12 of Cricket World Cup 2019 on Saturday at Cardiff's Sophia Gardens.

Shakib Al Hasan's century went in vain as Bangladesh failed to reach the massive 387 run-target as the team was all-out at 280.

Earlier, a superb 153 from Jason Roy and a big-hitting 64 from Jos Buttler fired England to their highest ever Cricket World Cup total as they posted 386-6 in their third match at this year's tournament.

Put into bat in blustery conditions, Jonny Bairstow and Roy got England off to an impressive start with just the second-century opening partnership of the World Cup so far, before Bairstow (51) fell to a brilliant catch from Mehidy Hasan.

Roy went on to reach his ninth ODI hundred off 92 balls as England continued to pile on the runs, before smashing three sixes in a row to pass 150, only to be caught by Bangladesh captain Mashrafe Mortaza the very next ball in the 35th over.

Buttler moved up the order to keep England in the attacking ascendancy, then fired the joint-fastest half-century at the World Cup before being caught on the boundary chasing another six.

Captain Eoin Morgan (35) was next to fall off the bowling of Mehidy -- the pick of the Bangladeshi bowlers with figures of 2-67 from his 10 overs -- before Chris Woakes and Liam Plunkett plundered 45 runs off the final 17 balls to see England post the seventh highest World Cup total ever.

One more wicket and it's over.

Mustafizur Rahman out on a duck.

Jofra Archer comes into attack and takes a wicket.

Archer to Mehidy Hasan, caught out by wicket-keeper Jonny Bairstow.

Next batsman is Mustafizur Rahman.

Sixth over of Ben Stokes' spell in this game.

He gave 3 runs from this over.

Three runs and one wicket from this over.

Ben Stokes has taken at least one wicket in his previous two wicket.

He scored 5 runs before losing his wicket to Ben Stokes.

Next batsman is Mashrafe Mortaza.

One wicket and four runs from Mark Wood's seventh over.

Mark Wook to Mahmudullah, caught out by wicket-keeper Jonny Bairstow.

Mehidy Hasan is the next batsman.

A good over by Ben Stokes.

One wicket and just three runs.

Next batsman is Mohammad Saifuddin.

An expensive over by Chris Woakes.

A total of 12 runs from the over, two boundaries and 4 singles.

It's his eighth ODI hundred.

Adil Rashid gets his wicket...

Next batsman is Mahmudullah.

Liam Plunkett to Mushfiqur Rahim, caught out by Jason Roy.

Next batsman is Mohammad Mithun.

ICYMI, watch the rather dramatic moment when Jason Roy brought up his maiden World Cup 💯 and got this reaction from his team-mates (and everybody else!)

The reactions are epic...

Mark Wood to Iqbal, caught out by Eoin Morgan.

In the previous overs, Jofra Archer was continuously pushing Iqbal with bouncers and Wood got the result.

Mushfiqur Rahim is the next batsman.

Soumya Sarkar out in their massive run chase.

Jofra Archer has broken through and sends Soumya back to the pavilion.

Opener Jason Roy smashed his way to a sensational 153 before Jos Buttler provided the late charge with a strokeful fifty as England posted a massive 386 for six against Bangladesh.

Roy, who blasted five sixes and had 14 hits to the fence in his 121-ball innings, laid the foundation with two crucial partnerships -- 128 with opener Jonny Bairstow (51) and 77 with first-down Joe Root (21).

Buttler then scored a 44-ball 64 laced with four sixes and two fours and added 95 with skipper Eoin Morgan (35) as England posted the first 350 plus total of the tournament.

Put into bat, England were off to a flying start as Roy and Bairstow scored 67 in the first powerplay and then brought up the hundred in 15 overs.

A stunning catch by Mehidy Hasan at short cover finally ended Bairstow's innings as Bangladesh produced a much-needed breakthrough in the 20th over bowled by skipper Mortaza.

Roy, however, continued in the same vein and completed his century with a boundary off Mustafizur in the 27th over but while completing the run he ended up knocking on-field umpire Joel Wilson down to the ground.

Roy and Root continued to dominate the proceedings as the hosts crossed 200 runs in 30.4 overs.

England lost their second wicket when Root perished in the 32nd over after inside-edging a slower ball to the stumps.

In the 35th over, Roy plundered three successive sixes off Mehidy Hasan to complete his 150 in 120 balls but he was holed out by Mortaza at extra cover in the next ball.

Buttler and Morgan then carried the onus with the former blasting two sixes and a four off Mosaddek Hossain to take England across the 250-mark in the 38th over.

However, the duo perished in the 46th and 47th over respectively, while Ben Stokes (6) too was out cheaply.

Liam Plunkett (27) and Chris Woakes (18) then provided some lusty blows to take England close to the 400-mark.

Liam Plunkett and Chris Woakes are the new batsmen.

Morgan and Stokes out!

Morgan out on 35 runs and Mustafizur gets the other wicket.

Mustafizur to Stokes, caught our by the skipper Mortaza.

Saifuddin gets Buttler for his second of the day! England are 330/4 in the 46th over. Can Morgan and Stokes give them a big finish? #ENGvBAN LIVE 👇 https://t.co/AmBAfhSMi9 pic.twitter.com/6JsAszcemP

Saifuddin to Buttler, caught out by Soumya Sarkar.

After playing a magnificent innings, Jason Roy out.

Mehidy Hasan gets the breakthrough.

Hasan to Roy, caught out by Mashrafe Mortaza.

Next bastman is Eoin Morgan.

Joe Root out after scoring 21 runs.

If England continued with the same run rate, what will be the target?

He has to make sure the umpire is OK before celebrating! pic.twitter.com/t0289Hu01Q

Third century by England player in the ongoing edition of World Cup.

Jason Roy completes century, which is his ninth ODI hundred of his career.

Joe Root is building a crucial partnership with the set batsman Jason Roy.

Just after completing his century, Jonny Bairstow lost his wicket.

Mashrafe Mortaza gets the breakthrough here and Mehidy Hasan takes a beautiful catch at slightly left of cover point.

His first half-century of this World Cup tournament.

England's openers have made hundred-run partnership.

The first powerplay is over and England have clearly dominated in the game so far.

Bangladesh are desperate need of taking a wicket to break this partnership.

Both the openers have given a stable start to the team.

Jason Roy and Jonny Bairstow are at the crease and Shakib Al Hasan will launch Bangladesh's bowling attack.

Time for the daily routine...both the teams are on the ground to sing their national anthems.

The match will start in 5 minutes.

Bangladesh won the toss and opted to field first against England.

Eoin Morgan is hoping for a better fielding effort:

Eoin Morgan is hoping for a better fielding effort as England seek to get their World Cup campaign back on track following their shocking loss to Pakistan.

"We didn't deserve to win the game. But we played some really good cricket, two guys scored a hundred and we nearly chased down 350," Morgan said in his pre-match press conference in the Welsh capital Friday.

"We lacked a bit in the field. And that still remains the case. Hopefully we put in a better showing in the field," the skipper added.

Mashrafe Mortaza believes anything is possible:

"I think they (England) are one of the biggest side in this tournament. It's not going to be easy, we knew that," said Mashrafe.

"But again, if we can play our best possible cricket, you never know."

🏴󠁧󠁢󠁥󠁮󠁧󠁿 "We are going to continue playing our brand of cricket"
🇧🇩 "The Tigers will do their best to spoil England's party"#WeAreEngland or #RiseOfTheTigers – Who will triumph in #CWC19 today? pic.twitter.com/UgIEolD7mC

What your prediction for today's match?

As we have in the matches so far, the venue which has offered a lot of assistance to the new ball bowlers early on.

Today's forecast suggests that it will be that an overcast and windy start to the day.

After winning the toss, the skipper will look to bowl first to try and exploit the conditions.

For Bangladesh, a match at Sophia Gardens sees them back at the scene of one of their greatest triumphs -- a 2005 ODI win over Australia, then as now world champions, that is arguably the biggest upset in the history of international cricket.

Both the teams have played a total of 20 matches, Bangladesh won four and England have won 16 times.

In the World Cup, both the teams have met thrice, England won once and Bangladesh have won it twice.

England will face the side who kick-started their transformation into a major threat in one-day internationals when the tournament hosts continue their World Cup campaign against Bangladesh.

The Tigers condemned Eoin Morgan's men to a first-round exit at the 2015 edition with a 15-run victory in Adelaide.

At that point there was no longer any way of hiding England's white-ball woes and, with a home World Cup up next, then England and Wales Cricket Board director Andrew Strauss was determined the national side's limited overs form had to improve.

To that end, Peter Moores was sacked as coach, with Strauss bringing in experienced Australian Trevor Bayliss as his replacement.

Since that debacle 'Down Under', England have risen to to the top of the one-day international rankings.

But having started their quest to win a first men's World Cup with a 104-run thrashing of South Africa at the Oval, they head into this weekend's clash on the back of a surprise 14-run defeat by Pakistan.

That match saw England lose their cool, with opening batsman Jason Roy and fast bowler Jofra Archer both fined for lapses in their conduct on the field.

Meanwhile, if England were annoyed by some of Pakistan's 'verbals', there were times when the large contingent of fans for the sub-continental side -- a common sight even when England are at home -- also had an effect.

England all-rounder Chris Woakes, usually the most mild-mannered of cricketers, put his finger to his lips in a bid to 'silence' Pakistan supporters after taking a catch on the boundary.

It could well be a similar story at Sophia Gardens on Saturday, particularly as several players on both sides who featured in England's ill-tempered 2016 win over Bangladesh in Dhaka are likely to be involved again.

England fast bowler Liam Plunkett, who could be recalled after missing the Pakistan defeat, said his team-mates knew how to maintain their composure.

Hello! And welcome to the Match 12 of the Cricket World Cup 2019 which is between England and Bangladesh at Cardiff's Sophia Gardens.