As it happened | AUSvWI: Australia beat West Indies by 15 runs 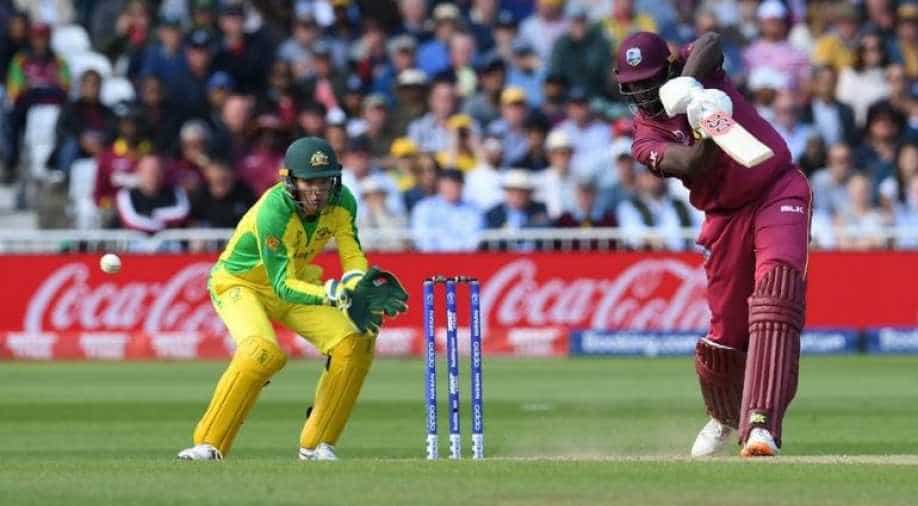 Australia defeated West Indies by 15 runs in the match number 10 of Cricket World Cup 2019 at Trent Bridge stadium on Thursday.

Mitchell Starc took a five-wicket haul as Australia successfully defended their target in their second match of the tournament.

Earlier, Australia posted a competitive 288 all out against West Indies after Nathan Coulter-Nile's 92-run knock.

Asked to bat first on a flat pitch at Trent Bridge, champions Australia got off to a terrible start as they were reduced to 79-5 before Coulter-Nile (92) and Smith (73) staged a rescue act with a 102-run stand for the seventh wicket.

Wicketkeeper-batsman Alex Carey (45) had earlier combined with Smith to arrest the slide, after Oshane Thomas, Sheldon Cottrell and Andre Russell put the Windies in a commanding position with their fiery pace in the opening hour.

The trio finished with two wickets each, before Coulter-Nile stole the show with the highest World Cup score for a number eight batsman, eclipsing Zimbabwean Heath Streak's unbeaten 72 in 2003.

The 31-year-old Australian was eight runs short of his maiden century when he was removed by Carlos Brathwaite, who cleaned up the lower order to finish with figures of 3-67.

Starc is on fire today, his inch-perfect yorkers are treat to watch.

Next batsman is Oshane Thomas.

Mitchell Starc comes into attack and gets two important wicket.

Starc strikes again to get another wicket, Jason Holder out.

Two wickets from the over and gave just 1 run.

He departs after scoring 15 runs.

Mitchell Starc gets the massive breakthrough.

Next batsman is Carlos Brathwaite.

Andre Russell is the next batsman.

Fifty for Hope, but Hetmyer is dismissed soon after!

Hope brought up the mark off 76 balls, but there's agony when Hetmyer is run out after a horrendous mix-up.

Next batsman is Jason Holder.

Shai Hope is holding up on the one end.

Yet another spectacular catch as #AaronFinch completes a fine one-handed effort to help Adam Zampa see the back of Nicholas Pooran.

Chris Gayle out...again he went upstairs to review the decision but this time... he is actually out.

West Indies retained the review though as it was umpire's call.

Next batsman is Nicholas Pooran.

Two wrong decisions by the on-field umpire both the time, it was Chris Gayle.

Gayle took DRS review and the decison was changed.

He departs after scoring just 1 run.

Next batsman is Shai Hope.

Chris Gayle and Evin Lewis are at the crease.

Australia are all-out for 288 against West Indies.

Nathan Coulter-Nile and Steve Smith helped Australia overcome a poor start to post a competitive 288 all out against West Indies in their second World Cup match on Thursday.

Asked to bat first on a flat pitch at Trent Bridge, champions Australia got off to a terrible start as they were reduced to 79-5 before Coulter-Nile (92) and Smith (73) staged a rescue act with a 102-run stand for the seventh wicket.

Wicketkeeper-batsman Alex Carey (45) had earlier combined with Smith to arrest the slide, after Oshane Thomas, Sheldon Cottrell and Andre Russell put the Windies in a commanding position with their fiery pace in the opening hour.

The trio finished with two wickets each, before Coulter-Nile stole the show with the highest World Cup score for a number eight batsman, eclipsing Zimbabwean Heath Streak's unbeaten 72 in 2003.

The 31-year-old Australian was eight runs short of his maiden century when he was removed by Carlos Brathwaite, who cleaned up the lower order to finish with figures of 3-67.

Brathwaite strikes again, and Australia are all-out after scoring 288 runs.

Brathwaite gets the breakthrough.

Next batsman is Adam Zampa.

Carlos Brathwaite comes into attack and gets one wicket.

Next batsman is Mitchell Starc.

Tailender Coulter-Nile is scoring runs and also he is making a crucial partnership with Steve Smith.

West Indies have been aggressive & are bowling test match line & lengths. They have used short pitched deliveries rather well. If they continue in this manner, they are contenders for the TOP 4. @windiescricket playing well is good for Cricket. 🏏#AUSvWI #CWC19 #MatchDekhaKya

Fifty for Steve Smith, his first since his international return! 👏

Steve Smith has completed his half-century.

Next batsman is Nathan Coulter-Nile.

Former skipper Steve Smith and Alex Carey are holding up.

The run rate has been improved in past few overs.

He departs after scoring 19 runs off 23 balls.

Seems a long time ago now, but how good was Oshane Thomas' delivery to get rid of #AaronFinch ?!#MenInMaroon | #CWC19https://t.co/jGESlhZWAR

total 8 runs from the over.

The first powerplay is over and it has been dominated by West Indies team.

He departs on a duck!

Next, batsman is Glenn Maxwell.

David Warner out after scoring just 3 runs off 8 balls.

Sheldon Cottrell gets the massive wicket.

Australian openers are back to the pavilion.

Usman Khawaja comes in to bat.

Finch outside edges the ball to the keeper, out for 6 runs.

Oshane Thomas gives 6 extras in the first over!

Australia are 10 for no loss after the first over.

Both the teams lined up for their National Anthems.

Match begins in another 5 minutes.

Before the match starts, the daily routine will happen, both the team will come out on the ground for their national anthems.

West Indies win the toss and elect to field against Australia.

Jason Holder's side has made one change as Evin Lewis replaced Darren Bravo while Australia are unchanged.

"The expectation from this #AUSvWI game is palpable!"@irbishi was at the nets to preview today's #CWC19 match 🏏 #CmonAussie #MenInMaroon pic.twitter.com/EbUFcSF6WO

What are you expectations from this match?

Live action from the Trent Bridge will start from 3:00 pm IST.

The history between the sides should ensure a compelling game but Holder played down the traditional rivalry.

"It's always been a great rivalry between West Indies and Australia," Holder told reporters on Wednesday.

Finch said the key to beating a resurgent West Indies is to have various strategies on hand to counter bowling attacks as teams could adjust very quickly in the tournament.

"I think if you just stick to one plan, then teams get on top of you pretty quickly or they adjust quick enough," Finch told reporters during a training session.

Finch warned against complacency especially against dangerous West Indies opening batsman Chris Gayle who is set to retire at the end of the tournament.

"I think when you come up against someone as dangerous as Chris, you have to be prepared, like I said before, that he's going to hit boundaries," Finch added.

"So I think it's important that you come prepared to take the contest to him because he definitely does that the other way."

The boundaries at Trent Bridge are short, hence the batsmen will be on an attack mode.

The bowlers will get assistance because of the overcast conditions. The start is expected to be cloudy.

There are also chances of rain throughout the day.

In the World Cup, both the team have met nine times and West Indies have a better record with five victories while Aussies won four contests.

Jason Holder's West Indies are reviving memories of their World Cup glory days with a pace attack that has the ability to strike fear into opposition batsmen.

The two-time champions opened their campaign at the tournament in England and Wales by skittling out Pakistan for just 105 at Trent Bridge as their quicks made good use of the bouncer.

Oshane Thomas led the way with four for 27, while Andre Russell, Sheldon Cottrell and captain Holder provided good support as the West Indies cruised to a seven-wicket win.

When West Indies beat Australia in the inaugural 1975 World Cup final at Lord's, their side included a four-man pace battery.

And when they defeated England four years later in another Lord's final to retain their title, the West Indies did so with the original "fearsome foursome" of Andy Roberts, Michael Holding, Colin Croft and Joel Garner.

Nobody is suggesting the current line-up is yet in that class but the fact they bowled Pakistan out cheaply without Kemar Roach and Shannon Gabriel shows that, once again, West Indies have an impressive stock of fast bowlers.

And it was further evidence that, although they only scraped into this World Cup via a qualifying tournament, they are more than capable of beating anyone on their day.

Australia, who began the defence of their title with a seven-wicket rout of outsiders Afghanistan, will pose a far sterner challenge at Trent Bridge on Thursday.

Hello! And welcome to the Match 10 of the Cricket World Cup 2019 which is between Australia and West Indies at Nottingham's Trent Bridge.