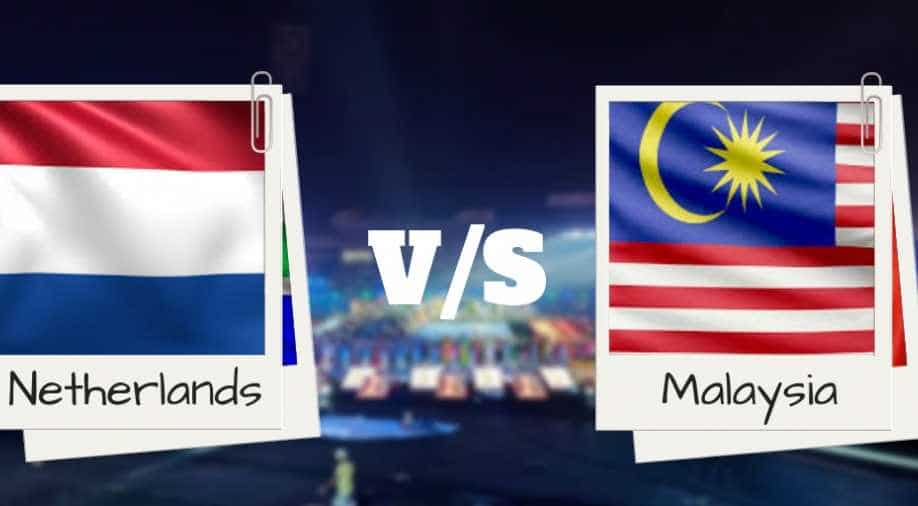 Netherlands vs Malaysia Photograph: Others

The Netherlands have won the first Pool D match after humiliating Malaysia 7-0 on Saturday at Odisha's Kalinga Stadium.

This is not the end, Malaysia, who recently won bronze at the Asian Champions Trophy, will look to make a stunning comeback in the tournament.

The Netherlands will next meet Germany on December 5 and Malaysia will clash with Pakistan on the same day.

The beautiful Dutch-dominated game finished with a 7-0 score.

It's celebration time in the Orange camp while team Malaysia will look for some answers. They need to revise their strategies after today's humiliation.

The seventh for the Netherlands.

Hertzberger scored another stunner for his team. He is on fire today.

Will there be another.

The game goes into the fourth and final quarter and the Dutch are flying high on spirits at Odisha's Kalinga Stadium.

Another brilliant goal by the Netherlands.

The Netherlands team earned a penalty corner which was beautifully converted.

The first shows a clear dominance of Netherlands despite having almost an equal ball possession.

Score after the first half: Netherlands 3-0 Malaysia

An attempt by the fans to mark the World AIDS Day which is dedicated to raising the awareness of the AIDS pandemic caused by the spread of HIV infection and mourning those who have died of the disease.

Malaysia is under pressure in front of the Euro giants.

Score after the second half: Netherlands 3-0 Malaysia

After the first quarter, Malaysia seemed to have lost momentum.

Poor and sloppy passes, no aggression.

It is becoming a Dutch-dominated game.

After several denials, Netherlands' striker Mirco Pruijser stretches the lead to 2-0 with a beautiful deflection.

A superb game by the Dutch!

Their dominance is visible on the pitch as Malaysia so far have two shots and Netherlands have 12.

He has made few terrific saves so far in the game.

Three Penalty Corners of Netherlands have been denied so far in this quarter.

End of a superb quarter!

Both the teams were neck-to-neck when it comes to stats, however, Jeroen Hertzberger of Netherlands got the breakthrough for his side in the 12th minute as Netherland lead 1-0.

🎥 | @hockeymalaysia has some of the best Hockey fans we know! Watch them cheer the team ahead of their match 😎#HWC2018 #Odisha2018 pic.twitter.com/pqRUeEGhfv

Fans have gathered at the Kalinga Stadium to support their team.

Netherlands will clash with Malaysia on Saturday at the Kalinga Stadium at 5 pm IST.

Having won the Summer Olympics twice, the Hockey World Cup three times, the Champions Trophy eight times, the EuroHockey Nations Championship three times and the 2012–13 Hockey World League tournament once, Netherlands is one of the most successful hockey teams in the world.

While Malaysia's head coach Roelant Oltmans believes that his team's recent performances will give them the required confidence to make an impact at the 14th edition of Men's Hockey World Cup 2018.

Recently, Malaysia won bronze at the Asian Champions Trophy after defeating Japan for the third-place match, where India and Pakistan were the champions as they shared the title.