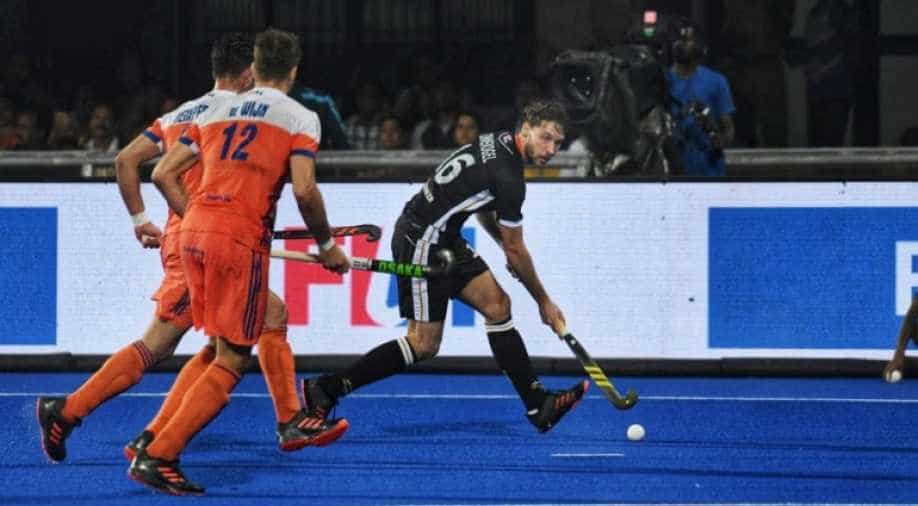 Hockey players of Netherlands and Germany in action. Photograph: Twitter

It's an end to Germany's fantastic hockey. They have defeated Netherlands 4-1 after lacking 0-1 in the first quarter.

They scored three late goals in the fourth quarter to put up a challenging game and register a win.

🏑 | LIVE | GAME-OVER! @DHB_hockey have prevailed but the @oranjehockey will look to take away many positives from this!

Penalty Stroke for Germany as the defender stop from foot at the goaline. Netherlands review for aerial ball, Video Umpire says no need to change on field decision and Christopher Ruhr converts the Penalty stroke. It is a brilliant from Germans who were coming from behind in the first half

Earlier, Marco Miltkau scored the third goal for Germany as Wellen pass from the left and Marco deflect it the near post.

Germany strikes again to double its lead. They are two goals ahead of Netherlands and it is an end to the game for the opposition.

Penalty corner for Germany and converted. What a goal! Germany gets the lead over Netherlands. It means it has almost diminished the chances of Netherlands.

🏑 | LIVE | Piece of cake! @DHB_hockey smash it in on the PC to take lead! @HerzbruchT the scorer!

Both the teams are trying hard to get the lead but the defenders must be applauded. Only few minutes are left in the third quarter to end and it seems the results will be same as of half time.

🏑 | LIVE | Glimpses from the first half!

And Germany equalises seconds before half time. The decision went for video referral and the results are same. It is a goal.

Penalty Corner for Germany Haner flicked another Penalty corner for dangerous ball and this time Germany managed to score as Mathes Muller converts the 2 deflection into a goal.

🏑 | LIVE | Scores are level at the halfway point in this game!

Germany trying hard to score the equaliser but getting tackled in the mid field and Netherlands are going for counter attack. Dutch getting most cricle entries from left that is 73%.

Quarter 1 end and Netherlands have an upper hand over Germany. A fantastic goal from Verger converted from Hertzberger pass have given the side a chance to dominate Germany in the next quarter.

Netherlands draw the first blood as Verger converts the pass from Hertzberger.

Jonas de Geus out for 2 minutes. Netherlands down to 10-men.

Meanwhile, Indian professional tennis player Leander Paes arrived at the Kalinga stadium to witness the game. Peas is considered to be one of the best doubles and mixed doubles players of all time.

📸 | Welcome to Bhubaneswar, @Leander. It is an honour to have you here at the Kalinga Stadium during the Odisha Hockey Men’s World Cup Bhubaneswar 2018.#HWC2018 #Odisha2018 pic.twitter.com/LThjGezAez

And the clash begins

Netherlands will lock horns with Germany in the first of today's Pool D encounters on day 8 of the Men’s Hockey World Cup 2018 at Kalinga Stadium in Bhubaneswar.

In the head to head comparison for previous World Cups, Germany have an edge as they won 2 games out of 6 while 3 ended in a draw.

The Hockey World Cup 2014 silver medallists Netherlands were in sublime form in their first match as they crushed Malaysia 7-0 thanks to a hat-trick from Jeroen Hertzberger a goal-a-piece from Mirco Pruyser, Mink van der Weerden, Robbert Kemperman, and Thierry Brinkman.

Germany, on the other hand, is coming into the match with a hard-fought win over Pakistan.