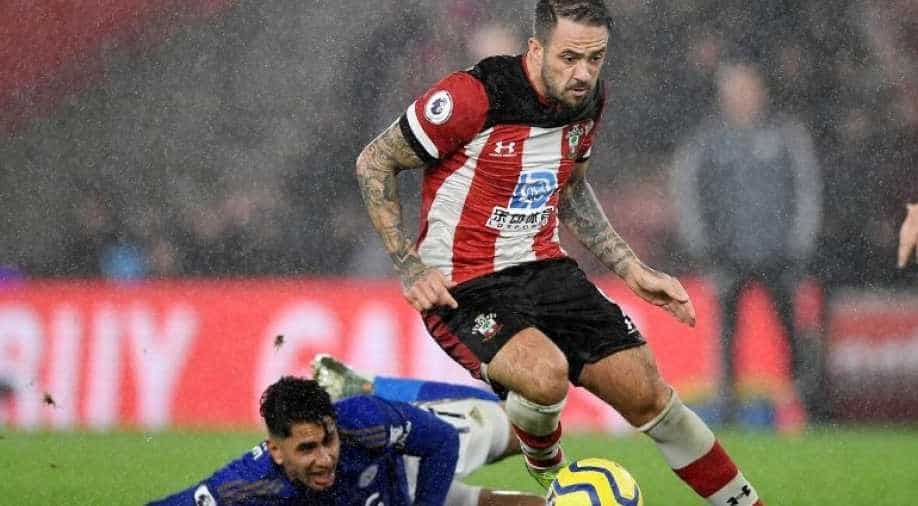 The biggest margin of victory on the road previously was eight goals, a joint-record held by three clubs.

Leicester City recorded the biggest ever English top-flight away win by beating 10-man Southampton 9-0 at a rain-sodden St Mary’s to move up to second place in the Premier League on Friday.

The biggest margin of victory on the road previously was eight goals, a joint-record held by three clubs.

It was also the first time a team had scored nine away goals in the Premier League and equalled Manchester United's record 9-0 Premier League win achieved at home to Ipswich Town in 1995.

The 2016 champions Leicester moved to 20 points from 10 games, their best start to a Premier League campaign, that leaves them five points behind leaders Liverpool and a point ahead of Manchester City, who both have a game in hand.

"I'm very proud of the team," said Leicester manager Brendan Rodgers. "To finish with nine (goals) was a remarkable effort away from home.

"We said at halftime... keep your tactical discipline, keep your speed in the game and we have to punish them. We have to do our job and score as many goals as we can and also keep a clean sheet."

Saints lost Ryan Bertrand to an early red card and were shambolic in defence as they slipped into the relegation zone on goal difference after taking one home point this season.

Southampton's heaviest Premier League defeat had been a 7-1 reverse to Liverpool 20 years ago, another unwanted record for their under-pressure manager Ralph Hasenhuettl.

"It was an embarrassing performance, the stuff of nightmares and especially playing at home," said Saints' forward Nathan Redmond.

"It just wasn't good enough and one of the poorest performances since I've been at the club and we’ll have to debrief that whole game from start to finish tomorrow."

There was a double blow for the hosts after 10 minutes when Chilwell tapped home a rebound to give Leicester the lead after Vardy’s shot was only parried by goalkeeper Angus Gunn.

A check by the Video Assistant Referee (VAR) showed a crude lunge by Bertrand on Perez in the build-up to the goal and the Southampton defender received his marching orders.

From there, Leicester was able to cut through their opponents at will.

Saints defender Yan Valery could only steer a poor clearance into the path of Tielemans to score after 17 minutes and two minutes later the latter turned provider for Perez to open his Leicester account.

He grabbed his second with a volley at the back post from Chilwell’s cross in the 39th, and the home humiliation was compounded when Vardy blasted past Gunn just before the break for a 5-0 lead.

Rampant Leicester added two more before the hour mark as Perez completed his hat-trick with a neat volley and Vardy was left unmarked to head home Chilwell’s cross.

Maddison added to the home misery with a 25-metre free-kick before Vardy completed his hat-trick with the last kick of the game via a penalty.

It was the biggest English top-flight win on the road since Wolverhampton Wanderers trounced Cardiff City 9-1 in the old First Division in 1955. Sunderland thrashed Newcastle United 9-1 away in 1908 while West Bromwich Albion beat Wolves 8-0 in 1893.