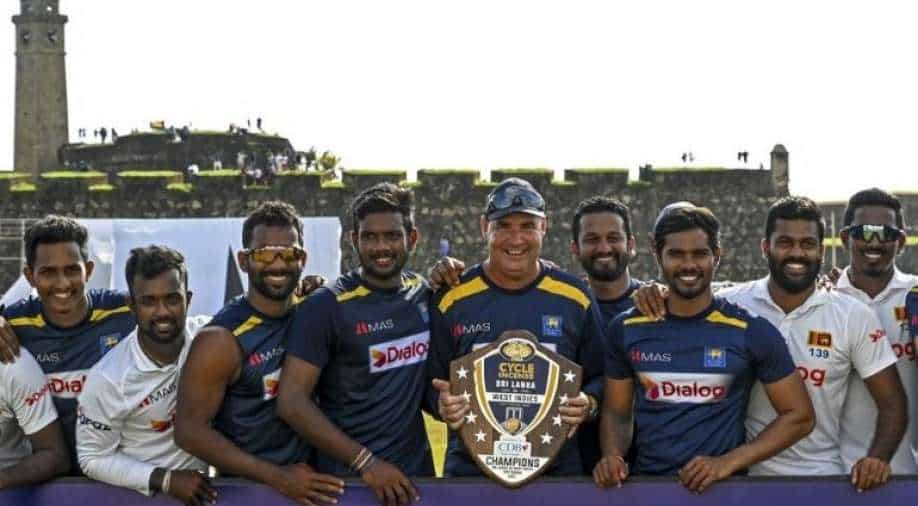 Sri Lanka's head coach Mickey Arthur (C) along with teammates pose with the trophy as they celebrate their win at the end of the second Test cricket match between Sri Lanka and West Indies. Photograph:( AFP )

Spinners Lasith Embuldeniya (5/35) and Ramesh Mendis (5/66) claimed five wickets each to trigger a massive collapse in the second innings and help Sri Lanka register a big 164-run win over West Indies in the second Test and wrap the series 2-0, here on Friday.

West Indies had lost only two wickets in the morning session and they seemed to have a good chance of escaping with a draw. However, their batters had no answers to the brilliant spin bowling from Lasith and Ramesh, who wreaked havoc on the final day of the second Test.

Mendis took seven wickets in the first Test and followed that up with sensational match figures of 11/136 in this Test. He was adjudged Player of the Series while Dhananjaya de Silva was named Player of the Match for scoring a fantastic unbeaten 155.

Sri Lanka started the day on 328/8 with de Silva on 153 not out and Embuldeniya keeping him company on 25 not out. Embuldeniya hit a couple of boundaries before he was cleaned up, for 39, by Jason Holder in the third over of the day.

That dismissal called for a declaration from the Sri Lanka skipper Dimuth Karunaratne, setting West Indies a target of 297. The de Silva-Embuldeniya partnership of 124 is the highest for the ninth wicket by a Sri Lanka pair in Tests.

Chasing the target, West Indies got off to a shaky start, as Mendis struck early, dismissing Kraigg Brathwaite lbw for 6. Jermaine Blackwood was joined by Nkrumah Bonner, the No 3 batter and together they steadied the proceedings.

However, on the stroke of lunch, West Indies lost Blackwood for 36. Embuldeniya induced an edge, caught at first slip by de Silva, when the West Indies opener tried to drive an outside-off delivery, and that ended the 50-run second-wicket association. The visitors went to lunch at 65/2, needing 232 more runs.

In the second session, Shai Hope shared a 27-run stand with Bonner, but his wicket sparked a collapse. Mendis had him caught for 16 and on the next ball, he struck again to send Roston Chase back for a golden duck. He finished the same over with another wicket, with Kyle Mayers becoming his fourth victim.

Embuldeniya joined the party shortly after, snaring Jason Holder`s wicket, who fell for 3. In his next over, he removed West Indies last hope - set batter Bonner - for 44. The spinner spun his web, trapping the West Indies batter nicely with an inside edge that pegged back his off-stump.

Kemar Roach hit three boundaries but it was too late with wickets falling at regular intervals. No other batter provided resistance as the rest of the line-up crumbled. In no time, the spin duo of Mendis and Embuldeniya wrapped up the West Indies innings, setting up a sensational win.