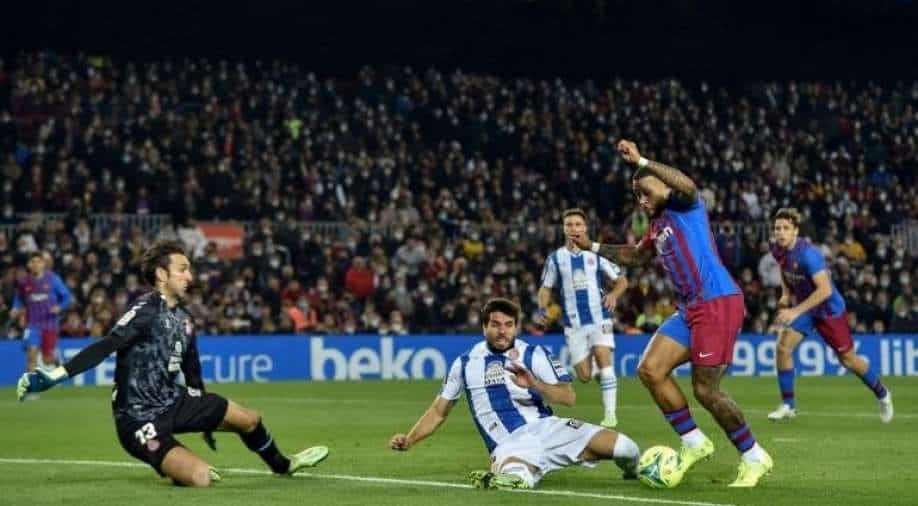 Barcelona climbed at sixth position in the La Liga points table after the win against Espanyol.

Xavi Hernandez started his reign as FC Barcelona coach with a 1-0 win in the city derby against Espanyol in the Camp Nou Stadium here. Although there were positive signs for Barca, they owed their win to a controversial penalty and some bad luck for their rivals, who saw two shots from striker Raul de Tomas hit the post.

Xavi made a declaration of intent in his starting 11 on Saturday night with 17-year-old Gavi and 19-year-old Nico Gonzalez joined by 17-year-old Ilias Akhomach, who was making his first team debut. The new coach's style was also quickly evident as Barca looked more aggressive and tried to pressure Espanyol high up the field.

Memphis Depay had Barca's first chance after just three minutes, but his volley was right at Diego Lopez, while Ilias fired over with his left foot. Espanyol were content to sit deep and soak up pressure and for all Barca's pressure, chances were few and far between, with Gonzalez seeing a shot blocked after a long Barca attack, while Lopez got down well to a Busquets` effort from outside of the area.

The half ended with Espanyol striker Raul de Tomas seeing a shot deflected inches over after getting in behind Barca right back Oscar Mingueza, Xinhua reports. Xavi replaced Ilias with another youngster Abde at the start of the second half and within a minute Barca were awarded a penalty after Memphis went down under a challenge from Leandro Cabrera.

It looked as if the defender had clearly got the ball, but the VAR confirmed the referee's decision and Memphis sent Lopez the wrong way from the spot. The game was scrappy after the goal, with too many niggling fouls and both Abde and Pedrosa were booked after squaring up to each other, a minute before Cabrera slid Abde's low cross out for a corner.

At the other end Ter Stegen punched away Adrian Embarba's free kick from a tight angle and De Tomas fired wide after again getting in behind Mingueza.

Abde was proving to be a threat for Barca, cutting inside and curling a shot just over the Espanyol crossbar, before beating Pedrosa for speed and sending the ball along the edge of the six-yard box.

Wu Lei came on for Espanyol in the 78th minute, just before De Tomas grazed the outside of the Barca post from a free kick and the Chinese winger then sent the ball over for Landry Dimata, who somehow headed wide with the goal gaping.

De Tomas hit the post with a powerful header after a cross from the left and Wu Lei was inches away from vital touch in the last seconds as Barca rode their luck to hold on.