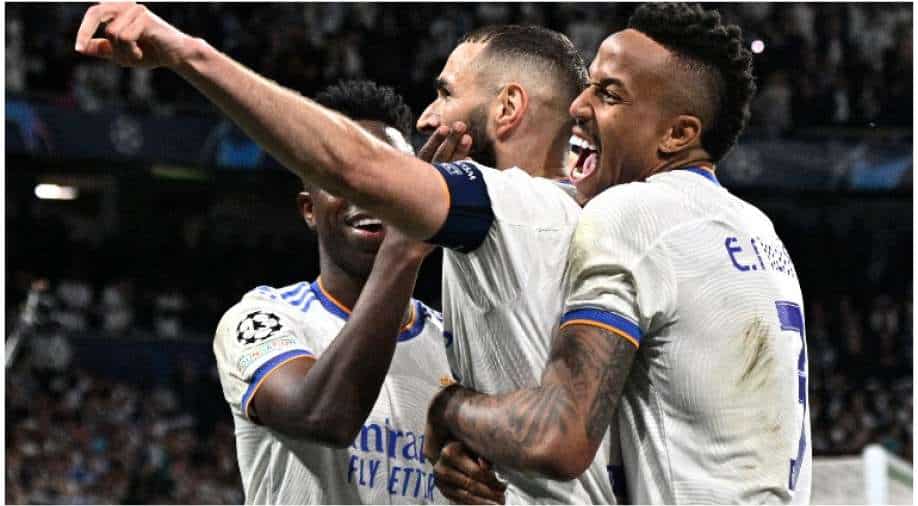 Karim Benzema who has recently equalled the record of Cristiano Ronaldo for the most knockout goals in a single Champions League campaign received praise from Fernando Hierro as the La Liga ambassador said the Frenchman is worthy of Ballon d`Or.

Real Madrid striker Karim Benzema heroics in the ongoing season of La Liga and UEFA Champions League has impressed many around the footballing fraternity. Benzema who has recently equalled the record of Cristiano Ronaldo for the most knockout goals in a single Champions League campaign received praise from Fernando Hierro as the La Liga ambassador said the Frenchman is worthy of Ballon d`Or. The Frenchman achieved the feat at the Santiago Bernabeu Stadium against Manchester City, where his goal moved him level with Robert Lewandowski`s tally of 86 goals. The Madridista equals the Polish marksman as the third-highest goal-scorer in European Cup history. Ahead of them on the list sit Cristiano Ronaldo (141) and Lionel Messi (125).

The goal helped him in equalling Ronaldo`s record for the most knockout goals in a single Champions League campaign. Benzema`s extra-time penalty winner against City on Wednesday was his 10th goal in the knockouts of UCL this season."Well, Karim Benzema is really an extraordinary player. When I was second coach to Ancelotti, I realized what an exceptional player he is and how is he very talented, how he connects with his mates and how he creates football. When Cristiano left, I think no one expected him to score as many goals as Cristiano," said LaLiga ambassador Fernando Hierro in a statement."He has surprised everyone. Maybe when he was playing with Cristiano and Bale, he was not as ambitious in terms of goalscoring as Cristiano was, but I think he is just fantastic. I think he is worthy of Ballon d`Or because he has really taken a step forward and is performing amazingly," he added.

Benzema has recorded his best personal tally this season, with 15 goals. Five came in the Group Stage, while the remaining ten have arrived in an incredible knock-out phase run which has seen him score in five successive games against PSG, Chelsea and Manchester City.

Benzema has found the back of the net in the Champions League for 17 consecutive seasons. His first came back in 2005/06 against Rosenborg while playing for Olympique Lyon, where he scored a total of 12 times. The other 74 goals have come in a Real Madrid jersey.He opened his European account for the team with a strike against Milan on November 3, 2009. His favourite opposition in the competition are Galatasaray, PSG and Chelsea, hitting five goals against all of them.