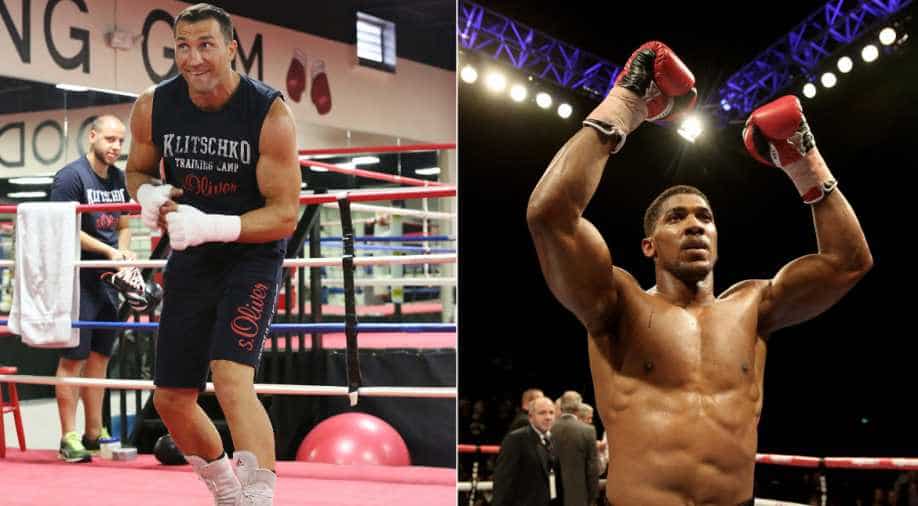 While it has been a momentous year for 2012 Olympic champion Joshua, who boasts a 17-0 record with all victories by knock-out, it has been a frustrating one for 40-year-old Klitschko. Photograph:(Getty)
Follow Us

A mouthwatering world heavyweight title showdown early next year between Britain's Anthony Joshua and former champion Wladimir Klitschko took a major step closer on Wednesday after the WBA sanctioned it.

The exciting Joshua, 27, who won the IBF title in April after it was voluntarily vacated by troubled compatriot Tyson Fury, must first come through the defence of his belt against solid journeyman Eric Molina in December in Manchester.

Joshua's manager Eddie Hearn had originally hoped the Klitschko clash would take place in December, but they had to wait on the WBA decision.

In the meantime, Hearn acknowledged there was risk in taking on 34-year-old Molina, whose previous world title contest saw him push WBC holder Deontay Wilder to nine rounds in June 2015.

"It's been an arduous wait to gain official approval but we were delighted to receive the news that the WBA will officially sanction the fight between Anthony Joshua and Wladimir Klitschko for the WBA super title," Hearn said on www.matchroomboxing.com.

"We will now move forward with (Klitschko's manager) Bernd Boente and Team Klitschko in planning the date and venue knowing that victory against Eric Molina in Manchester on December 10 is more important than ever."

Matchroom said the fight would be staged in "spring 2017".

While it has been a momentous year for 2012 Olympic champion Joshua, who boasts a 17-0 record with all victories by knock-out, it has been a frustrating one for 40-year-old Klitschko.

The Ukrainian had hoped to regain the IBF, WBO and WBA belts which he lost to Fury in a stunning upset last November.

His rematch with Fury for the WBA and WBO belts had been set for July 9, only for an injury to force the British fighter out.

Fury then pulled out of a second bout scheduled for late October because of depression and he vacated the WBA and WBO belts so he could focus on battling his mental turmoil.