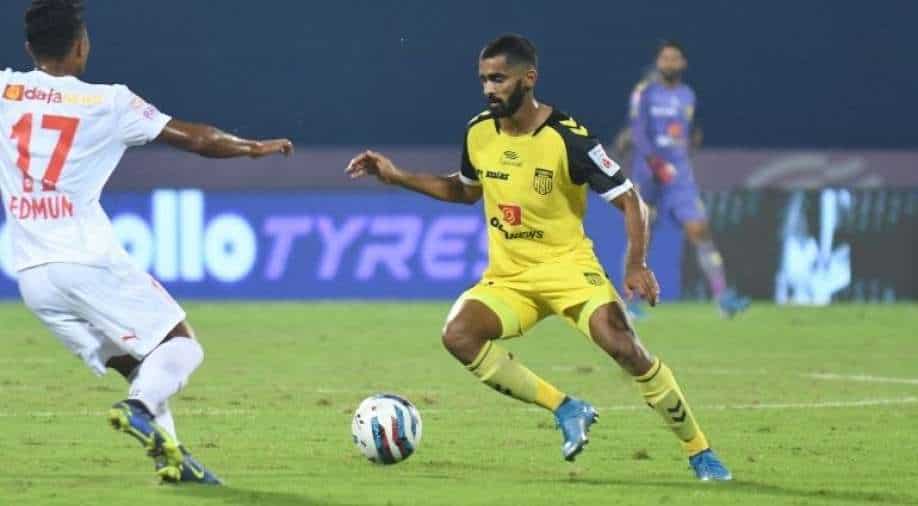 Bengaluru FC were left hapless as Hyderabad FC rode on Bartholomew Ogbeche`s first-half strike to down the Blues 1-0 in the 2021-22 Indian Super League (ISL) at the Athletic Stadium in Bambolim on Wednesday.

Ogbeche found the back of the net in the 7th minute as his side dominated proceedings from the off to leave Bengaluru at ninth position with four points from five matches.

The hosts started on the front foot and went ahead as soon as the seventh minute. Akash Mishra found Ogbeche after darting past a few white and blue shirts. The Nigerian then fired home from the edge of the box as the ball took a slight deflection to nestle in the back of the net past a diving Gurpreet Singh Sandhu.

Mishra looked in fine form as he teed up Ogbeche once again in the 17th minute but Gurpreet was off his line early to avert the danger. At the half-hour mark, Hyderabad had another chance to double their lead when Ogbeche dinked a fine ball for Javier Siverio but the latter agonisingly shot over the bar.

Bengaluru conjured up a chance two minutes before halftime when Cleiton Silva whipped in a free-kick for Chhetri but the club captain glanced his header over.

Bengaluru upped the ante after the break with Cleiton at the centre of it. The 34-year old Brazilian found the target in the 56th minute but his shot lack power and was straight at Laxmikant Kattimani in the Hyderabad goal.

At the hour mark, Silva came closer when his attempt flew inches over the bar after substitute Danish Farooq set him up. Two minutes later, Silva was in the thick of things again. This time Farooq headed the ball down for Silva to take a swipe but the former Shanghai Shenxin footballer shot straight at the keeper again.

Chinglensana Singh almost gifted Bengaluru an equaliser when his botched clearance went just over the crossbar.