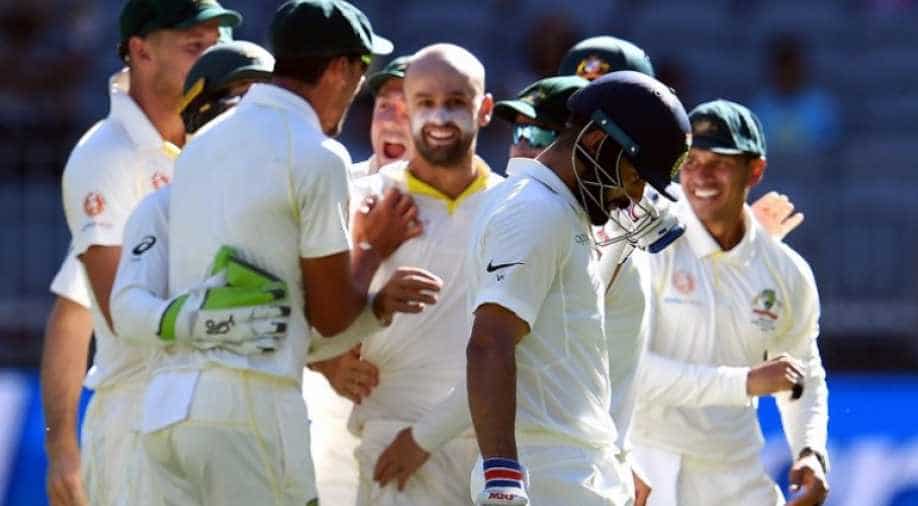 Virat Kohli (R) walks back to the pavilion after his dismissal as Australian players celebrate. Photograph: AFP

Chasing 287, India were 112 for five at stumps on the fourth and penultimate day of the second Test against Australia here Monday.
The visitors trailed by 175 runs.

Australia get the biggest wicket!

Lyon to Virat, caught in the slips by Khawaja.

India made a poor start to their daunting run chase in the second test losing the key wickets of Lokesh Rahul and Cheteshwar Pujara before tea on the fourth day with Australia's fired-up quicks smelling blood on a menacing pitch on Monday.

Chasing 287 runs at the Perth Stadium after bowling out Australia for 243 in their second innings, India were in a dire position at 15 for two with Murali Vijay six not out and captain Virat Kohli yet to score.

An out-of-form Rahul played on to his stumps off Mitchell Starc on the fourth ball of the innings to be dismissed for a duck and was soon followed by the in-form Pujara, who gloved a sharp short ball from Josh Hazlewood to be caught behind.

India have lost Rahul and Pujara early in their chase of 287, with Starc and Hazlewood taking one wicket each.

They go to tea at 15/2. Can Kohli and Vijay pull them out of trouble? #AUSvIND LIVE
➡️ https://t.co/viG01Bpvlc pic.twitter.com/38Y7Hp7jWC

Pujara, India’s first test hero in Adelaide, fell for four to dent India’s faint chances after an inspired comeback with the ball earlier in the session.

After a wicketless morning session, India came alive through blistering short-pitched bowling from Mohammed Shami, who made the ball steeple off the grassy wicket to finish with a career-best 6-56.

Australia spectacularly lost four wickets for six runs starting with captain Tim Paine (37) falling to a vicious short ball from Shami, which spat off the pitch hitting the glove and ballooned to slip.

Shami was on a hat-trick when he had Aaron Finch caught behind down the leg-side in a fleeting resumption for the opener.

Finch retired hurt on day three on 25 after being struck on the glove by a searing short ball from Shami but X-Rays cleared him of serious injury to his right index finger.

Shami was denied the hat-trick but soon claimed his fifth wicket with another menacing bouncer that caught Usman Khawaja's glove to be caught behind for 72.

Khawaja, Australia’s most accomplished batsman, notched his first half-century of the four-test series in his determined 213-ball knock.

Australia’s lead was 250 before Hazlewood (17 not out) and Starc (14) added an invaluable 36 runs for the last wicket.

Hazlewood and Starc added 36 potentially crucial runs for the final wicket after Shami claimed a six-for.

The pyrotechnics contrasted a sedate morning session dominated by Australia, who grabbed control of a fluctuating match with Khawaja and Paine batting through to lunch.

The strength of Australia’s position is reflected by the fact that India have successfully chased down a fourth innings target of more than 200 runs on only 12 occasions.

Scoreboard at tea on the fourth day:

Second player goes back to pavilion.

Hazlewood takes one of the most crucial wickets of Pujara.

Just the first over and Australia dominate as Mitchell Starc gets wickets off fourth ball of the innings.

Bumrah gets another as Australia were all out after scoring 243 runs in their second innings.

India need 287 runs to win the second Test of a four-match series.

He adds the scalp of Lyon to his list to trigger Australia's collapse after lunch. He has 6/41 for now – his best figures.

Shami is on fire with the new ball and India have claimed this session.

After Shami it's Jasprit Bumrah.

Shami's bouncers with the new ball have done the work for India.

He gets wicket of a set batsman, Usman Khawaja.

He targeted his injured finger and Finch got caught behind by wicketkeeper Pant.

Shami will be on a hat-trick in his next over.

Shami got the breakthrough after lunch as he sends back Tim Paine.

Australia were 190 for four in their second innings, leading India by 233 runs at lunch on day four of the second Test.

Khawaja notches up a half-century, off 156 balls, and Australia extend their lead to 200.

It's been slow but steady progress for the home side on the fourth morning.#AUSvIND LIVE
➡️ https://t.co/viG01Bpvlc pic.twitter.com/a9fiWBZeen

He is building up a crucial partnership with skipper Tim Paine.

This session is very important for both the teams.

Definitely a good news for the Australian team as their opener Aaron Finch, who was retired hurt yesterday after injuring his index finger, is looking absolutely fine as he can be seen sitting in the dressing room all padded up.

Virat Kohli starts today's game with star pacer Jasprit Bumrah and also Mohammed Shami is back into the attack.

Australia battled through an onslaught from India's fiery fast bowlers on the third day of the second test, building an ominous 175-run lead with six wickets in hand on a menacing Perth Stadium pitch that is expected to deteriorate further.

The hosts reached stumps at 132 for four in their second innings on Sunday with Usman Khawaja 41 not out and captain Tim Paine unbeaten on eight.

Australia, desperate to level the series after narrowly losing the first test in Adelaide, could be without the services of opener Aaron Finch, who retired hurt on the stroke of tea after being hit on his right index finger.

"I’m not sure if he’s going to bat but he’s been cleared of any serious damage,” spinner Nathan Lyon said of Finch’s injury.

"I would rather be in Australia’s change rooms than India’s. We know we have the bowlers that can defend (the total)."

India quick Jasprit Bumrah remained confident about his team’s position, but said the morning session on day four would be pivotal.

"I think our team is capable of chasing any total," he said. "We want to take early wickets to reduce the total."

Under overcast skies, Australia's batsmen faced torrid bowling from India's fired-up quicks with Finch, who was unbeaten on 25, forced off after being hit by a searing delivery from Mohammed Shami.

Marcus Harris, Finch's opening partner, had earlier been hit on the helmet attempting to evade a sharp bouncer from Bumrah, who bowled superbly in favourable conditions.

A bewildered Harris fell after the tea break, clean bowled by Bumrah for 20 after not offering a shot, and Shaun Marsh was caught behind for five while rashly attempting a pull shot off Shami.

Australia's inexperienced batting-order struggled under pressure with Peter Handscomb making an unconvincing 13 before being trapped leg before after shuffling across his stumps to Ishant Sharma, who bowled without luck initially.

Travis Head was dismissed before the close for 19 after needlessly guiding a wide Shami delivery to deep third man, in a mirror-image of his first-innings dismissal.

Australia's impulsive batting almost squandered their advantage after bowling out India for 283 to gain a handy first-innings lead of 43 runs, despite a brilliant century from India captain Virat Kohli.

An enthralling morning session belonged to the peerless Kohli, whose 123 came to an end at the stroke of lunch when he edged Pat Cummins to a forward-diving Handscomb at second slip.

Whether Handscomb got his fingers under the ball will be a matter of debate for days to come but the onfield official's soft signal was out and the third umpire did not reverse the decision on review.

Kohli had reached his 25th century in style with a flowing off-drive to the boundary and then placed his helmet on the ground, pointed to his bat and made a yapping gesture with his gloved hand.

It was his sixth century in Australia, which matches the tally of the great Sachin Tendulkar, and ended a drought against Australia with just 83 runs in his past seven test innings against them.

Kohli showed no lasting ill-effects from an earlier injury scare when he was struck on the forearm by a searing Mitchell Starc bouncer and required treatment.

Lyon targeted the pitch's expansive rough patches and cleaned up the tail to finish with 5-67.