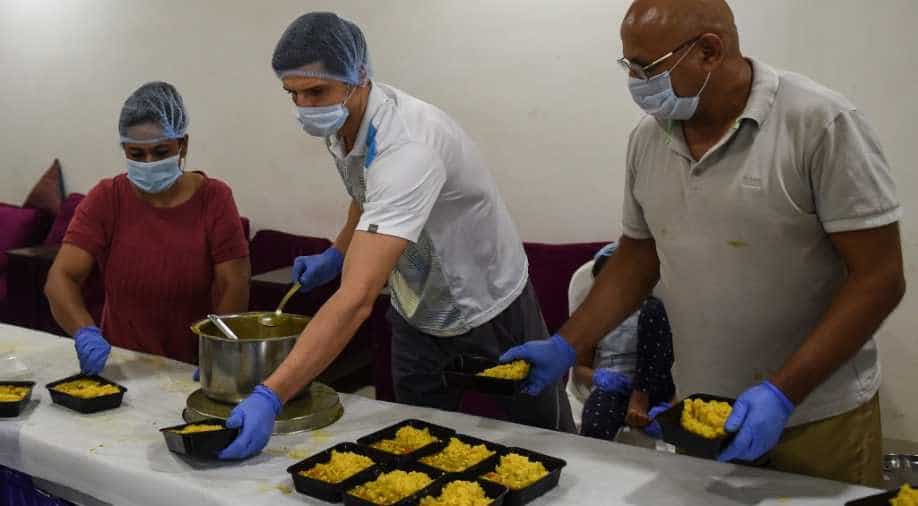 Moldovan tennis player Dmitrii Baskov has been hailed as an "Indian hero" after joining a campaign to feed Ahmedabad's poor, who are struggling during the coronavirus lockdown.

Moldovan tennis player Dmitrii Baskov has been hailed as an "Indian hero" after joining a campaign to feed Ahmedabad's poor, who are struggling during the coronavirus lockdown.

Baskov, a two-time Davis Cup player, arrived in India in January to visit a tennis academy before the advancing pandemic prevented him from returning home.

The 25-year-old, once a hitting partner for Wimbledon champion Simona Halep, has since been helping out by packaging food for the needy in Ahmedabad, capital of the western state of Gujarat.

He is among a team packing bread, rice and other dishes at the Ace Tennis Academy, destined for the city's slums and containment zones.

"My friend Pramesh Modi mentioned this (idea of feeding the poor) and I said yes, sounds great and the next day we did it and it continued day after day," Baskov told AFP.

"One hundred, 200, 300 packets and then we realised we are doing some great stuff. It is not a daily desire or action, it is now a natural act of helping.

"I am a sportsman and nothing more than that but the desire to help is always with me."

The nationwide lockdown, imposed on March 25, has caused misery for millions who rely on India's vast, hand-to-mouth informal sector.

Ahmedabad has seen a surge in coronavirus cases and the city remains under strict lockdown, with only milk and vegetable shops allowed to remain open.

Gujarat is the second-worst hit among India's states and territories, with 6,625 cases and 396 deaths, according to national government figures.

Baskov's efforts have received wide attention in Gujarat newspapers. The food packages are picked up and distributed by workers from Ahmedabad's municipal government.

"He is passionate and particular with what he is doing. Since the time he got to know of this act, he has joined us and is a hero."

Both of Baskov's parents, who live in Moscow, are doctors and his father, who recently recovered from COVID-19, is working with the ambulance service there.

"My dad has plenty of stories of people almost dying and he is right there," said Baskov.

Baskov has also donated blood to help people with thalassemia, an inherited condition in which the body makes inadequate amount of haemoglobin.

A volunteer at the tennis academy says Baskov serves as a "lesson in humanity" for everyone.

"He is an Indian hero and could be a role model for a number of Indians who have not come out of their houses to even help out in one way or the other," said Mitul Parikh, who packs food alongside Baskov.

"So if a person from another country can help Indians in such times of crisis then it is a lesson in humanity for everybody."

Pramesh Modi, director of the academy, said his team have packed and delivered more than 275,000 food packages and more than 700 ration kits, which contain about a month's worth of supplies.

"(Baskov) is here since January and when the situation worsened decided to stay back," he said.

"And he happily decided to help us out in this good cause."